Ortega proud to be part of contender versus legend

Shortly after Brian Ortega put the finishing touches on his second-round submission victory over Cub Swanson in early December, the questions started coming.

Having pushed his winning streak to five and extended his unbeaten run to begin his career, people wanted to know if the talented Californian was going to lobby for the opportunity to face Max Holloway for the featherweight title?

A week before Ortega forced Swanson to tap, Holloway collected his first successful title defense, replicating his title-winning effort in a rematch against Jose Aldo at UFC 218 in Detroit, Michigan. Originally scheduled to face Frankie Edgar, the former lightweight kingpin was forced from the bout due to an injury and with Ortega fresh off the best performance of his career, many wondered if he would push to replace “The Answer” whenever the UFC looked to book the featherweight champion next.

Ortega immediately deferred to Edgar, bringing the speculation to an end before it ever really gathered much momentum.

“They were originally scheduled and it didn’t happen,” Ortega said, explaining why he opted to wait his turn and argue that Edgar was still deserving of the next crack at the featherweight belt. “I’m a guy that looks at the whole big picture and I make my opinion based on all the facts; I’m not biased to my own opinions and my own self.

“I really look at what’s fair and to me at that time, that’s what seemed fair,” he added. “I said, ‘This guy already had this shot’ and unfortunately Frankie got injured at the time and they were unable to fight, so that left a little question mark after I finished Cub. So I said, ‘Let Frankie and Max bang it out and I’ll take the winner.’”

Two months later, with Holloway and Edgar re-booked for the main event of UFC 222 in Las Vegas, fate intervened.

This time it was Holloway who suffered an injury and was forced to withdraw and with Edgar eager to remain on the March 3 fight card at T-Mobile Arena, a call went out to the surging finisher.
RELATED CONTENT: Ortega featured on UFC Countdown | Embedded Ep. 2 | Rising Stars: Brian Ortega

“Max got injured and I thought Frankie was going to wait, but things happen and we took the fight,” said Ortega, who turned 27 earlier in the month, but has yet to celebrate, opting instead to postpone his party until after he shares the cage with Edgar this weekend.

While his placement in the co-main event this weekend was last minute, Ortega’s arrival in the upper echelon in the 145-pound ranks has been in the offing for a couple years. 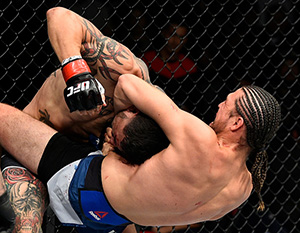 two-and-a-half years, each bout has elevated his standing in the hierarchy of featherweight fighters and brought Ortega one step closer to contention.

He hasn’t tried to skip any steps and has yet to stumble inside the Octagon; it’s just been one win after another, each more impressive than the last.

“It’s simple, man – slow and steady wins the race,” said Ortega regarding his progression up the featherweight ladder. “We’ve been fortunate enough to have the career where we just had a tougher opponent every single time and every single time, I come out there and I show what I’m capable of. I love it, man, to be honest with you.”

As soon as the fight was announced, observers drew comparisons to Edgar’s bout with Yair Rodriguez at UFC 211 last year.

Like Ortega, Rodriguez had ascended into the Top 10 and was in need of a signature win over a veteran talent in order to establish himself as a legitimate contender in the deep and talented featherweight division. Edgar drew the assignment and many wondered if the showdown in Dallas would end up being a passing of the torch, with the perennial title threat ceding his position in the upper echelon to the surging Mexican prospect.

Instead, Edgar issued a reminder – literally and figuratively – that there are levels to this sport, taking down and dominating Rodriguez to the point that the contest was halted after the second round.

“I feel like the competition I’ve faced is different than Yair’s,” said Ortega. “I fought veterans and I finished the veterans. I fought Clay Guida. I fought guys like Thiago Tavares who had 15 fights in the UFC when I fought him. I fought Cub Swanson.

“I fought big names and veterans – guys who have been in the sport since I was in high school – and I was successful and the caliber they were at, I got them all on winning streaks.

“Honestly, I consider myself a contender,” he said, “and this feels like it’s a contender facing a legend.”

So how would it feel to defeat a legend and earn a shot at Holloway and the featherweight title later this year?

“I don’t even think I would have words for it,” admitted Ortega. “Every single fight, I leave myself speechless because of all the hard work and the sacrifice that I’ve put myself through and on the day of the fight, it can go one of two ways and for it to go my way, it’s…”

He trails off momentarily.

“The feelings, the joy, the relief that it’s finally over – and then later on the scare of the next step – for me it would be a dream come true.”

It would also make for a terrific belated birthday present for the unbeaten contender, who turned 27 earlier in the month.

“I really haven’t even celebrated it yet, but hopefully after Saturday I can actually eat some food that I like and be out past midnight,” laughed Ortega. “Oh man – we’re gonna have Jack in the Box.”