After featherweight champion Max Holloway was forced out of Saturday’s UFC 222 main event due to injury, his challenger, Frankie Edgar, still wanted to fight. In stepped rising star Brian Ortega, who stunned the crowd at T-Mobile Arena and earned a shot at Holloway with a first-round knockout of Edgar in the co-main event.

The finish was the first suffered by Edgar in 28 pro fights.

Edgar was fighting the usual Frankie Edgar fight from the start, darting in and out with quick combinations and using his movement well. Ortega stayed close throughout, taking his time to find his range, and with under a minute left, he rocked Edgar with a left elbow to the head. Moments later, a right uppercut dropped the former lightweight champion, and after one more follow-up blow, referee Jason Herzog had seen enough, stopping the fight at 4:44 of the opening round.

Due to an injured foot, unbeaten bantamweight prospect Sean O’Malley wasn’t able to stand for the final verdict announced by Bruce Buffer, but it didn’t put a damper on another impressive victory by the rising star, who won a three-round unanimous decision over Andre Soukhamthath. 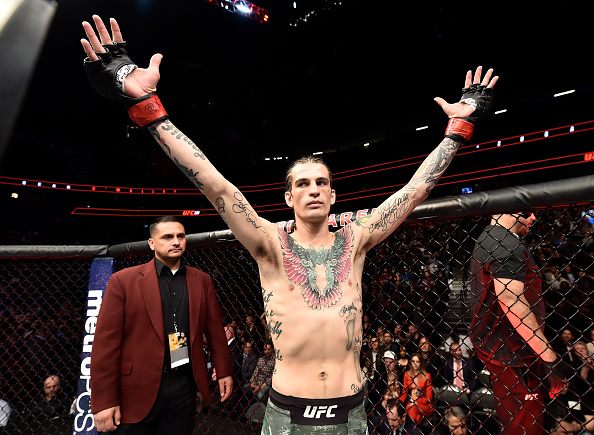 A kick by O’Malley hurt Soukhamthath’s left leg early in the fight, but the Rhode Island native walked it off and got back to business, scoring with a right. O’Malley continued to play the role of aggressor, though, scoring with a variety of blows from all angles. With 42 seconds left, a right by O’Malley dropped Soukhamthath, and while the veteran got back to his feet, he was clearly dazed, with a left kick to the head before the horn rocking him again.

Soukhamthath came out throwing hard to begin round two, eager to get back into the fight. O’Malley kept tagging him, though, prompting a takedown by Soukhamthath. O’Malley was unbothered by the change of location, as he sunk in a triangle choke and then an armbar. Soukhamthath pulled free from both and got into side control with two minutes left, but O’Malley escaped and briefly grabbed a guillotine choke and rear naked choke before the end of the round.

O’Malley hurt himself with a kick early in the final frame, and Soukhamthath used that moment to get the fight back to the mat with plenty of time left on the clock. As the two rose with under two minutes left, O’Malley couldn’t put any weight on this right foot, and the fight went to the canvas once more. Soukhamthath controlled matters from there, with O’Malley clearly in pain but able to make it to the end of the fight.

Arlovski was sharp in the first round, firing off leg kicks and throwing in some takedowns for good measure as he switched up his attacks nicely. There was more of the same in the second and third, as Arlovski seemed to baffling Struve with his strategy, and by the end of the night, Arlovski had scored more takedowns in this fight than he had in his entire UFC career. The result? A win by scores of 29-28 twice and 30-27 that showed this “Pit Bull” could learn some new tricks.

Unbeaten Ketlen Vieira continued to impress in the main card opener, as the No. 5-ranked bantamweight contender won a three-round split decision over No. 6-ranked Cat Zingano.

Vieira (10-0) pressured Zingano throughout the first round, but the former world title challenger was able to score with hard knees to the body and a throw to the mat. Vieira’s striking was tighter, though, and late in the round she got a takedown of her own and kept her foe grounded until the horn.

The Brazilian contender threw Zingano (9-3) to the mat as the second frame opened and she landed in mount, but Zingano was able to get out of trouble, even if she wasn’t able to rise to her feet. Vieira wasn’t discouraged, and she kept Zingano down for the rest of the round.

With another trip to the mat and an extended stay there in the third, it looked like Vieira was going to put another round in the books, but with two minutes remaining in the fight, Zingano shot up to her feet. Vieira was able to lock her up until a restart by referee Kevin Herzog, but Zingano’s late rush wasn’t enough to change the direction of the fight, which went to Vieira by scores of 29-28 twice and 28-29.