Ortega happy to showcase all skills at UFC 195 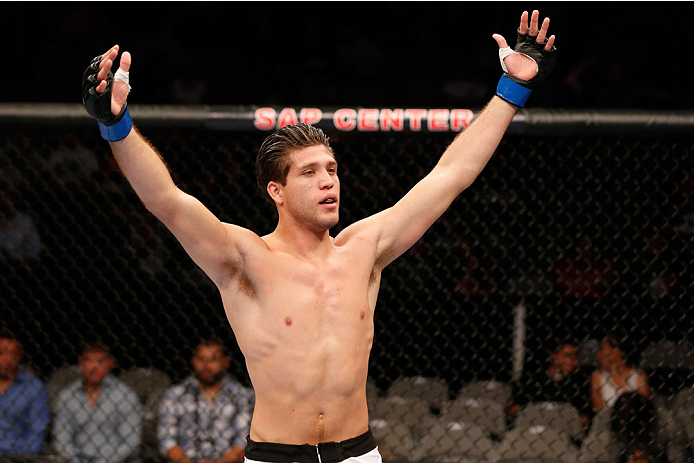 Prior to his most recent Octagon outing, it was said on UFC.com that the undefeated star of the Gracie Jiu-Jitsu Academy was “savage” - in the best way possible. And he confirmed it by scoring a third-round TKO of Thiago Tavares in a memorable Fight of the Night scrap. As for his thoughtfulness, tangling with Ortega is like a “choose your own adventure” book, but all paths lead to the same ending – with “T-City” getting his hand raised.

Up next for Ortega: Diego Brandao

“If it’s a good night, you can pick your poison,” Ortega said. “If you take it to the ground, I’ll make it a fight there. If you want to do the stand-up, we’ll fight there too.”

In June, the 24-year-old SoCal star improved his pro record to 9-0, 1 NC with a big finish over a vaunted opponent – on a month’s notice, no less.

“Honestly, I felt like this guy doesn’t know what’s about to hit him,” Ortega said of Tavares heading into their UFC Fight Night bout. For the first two rounds, Ortega matched Tavares’ energy and fought on the ground, where the Brazilian clearly wanted it as he shot for seven takedowns. “T-City” displayed the BJJ skills learned from being a prize pupil and young teaching savant at the famed Gracie Academy by staying active off his back, both offensively and defensively.

“I felt like I have good training from the Gracies on the ground,” he said. “From teaching civilians how to survive to teaching cops how to get up. When I was on the bottom in the fight, I felt comfortable. The majority of the takedowns in the beginning, I wasn’t trying to waste energy trying to stop them. I knew in my head that there was no way he was going to hurt me that bad, even though I’m on the bottom. People don’t believe that because they think if you’re on the bottom in MMA, then you’re losing and the other guy is throwing punches. But the funny thing was, by the end of the second round, one of the announcers even said that I was down by 100 punches, but when they stood us up and you saw the damage on both of us - my face was clean after the fight and his was not too clean.”

While Ortega felt like he was winning the first 10 minutes with short elbows from the bottom, and submission and reversal attempts, he knows the final say is not up to him.

“You always have to look at it from the judges’ eyes, and to the judges and to the world, if you’re on the bottom, you’re losing,” he said. Forced into action by his doubt in the scorecards, T-City went into the final stanza with a chip on his shoulder and a score to settle. Just four minutes later, Ortega would deliver his first striking stoppage.

“I told myself before that third round, don’t get taken down,” he said. “Whatever happens, do not get taken down. Once he gave up on trying to take me down, then my hands got to let loose. My striking, my spinning back elbow, everything started to come into play when going to the ground was no longer a choice. There’s a lot more to my striking than people think. I’m always evolving.”

Ortega shrugged off four takedown attempts, landed more than 20 significant strikes, and dropped and stopped Tavares, all with his rarely seen stand-up skills. Most know of Ortega’s coach/mentor/friend relationship with Ryron and Rener Gracie, but there is an equally strong familial bond with his striking coach, James Luhrsen. The Black Belt Surfing leader is the man who transformed Ortega from an “old school Rickson Gracie style, front leg, both hands out” fighter to the crisp striker who tore up an eight-year UFC veteran like Tavares on the feet in that final round.

“(Luhrsen’s) the one who gets the credit,” Ortega said. “Me and James got together at his house when I was 18 years old. He’s a surfer. He was a boxer back in the day and before he went pro, he broke his neck. So there went that. We started working in his garage and that’s where all my fights and training still happen – in that garage. There’s no one to bother us. We have our bags, we have our mitts, we have a little ring. That’s it. We’ll go to Anderson Silva’s (Muay Thai College) and go to Black House (MMA) and we’ll utilize the cage, but the main thing is me and him in private. A lot of people don’t see my striking, but I’ve never really had a chance to showcase it. People want to take me down to the ground for some reason. And in some way, it always goes to the ground. That’s where I’m comfortable. That’s why I feel people haven’t seen my striking.”

Besides sharpening up his straights and hooks, the Black Belt Surfing team has been busy giving back through the Mauli Ola Foundation.

“Just last week, I went to Children’s Hospital Los Angeles,” said Ortega, who visited many sick kids, gave out goody bags and tried to provide some fun for them. “These kids are stuck here from four months to six months to sometimes even a year in this hospital – you can imagine how stressful that could be. I feel that for someone to get better, they have to mentally feel good about themselves. I visit these kids there and have fun with them and make them forget that they’re there.”

Up next, Ortega makes the jump to Pay-Per-View, as he is set for a struggle against Diego Brandao at UFC 195. The Ultimate Fighter 14 winner has had a career resurgence as of late with back-to-back first-round knockouts in 2015, but Ortega is primed to add another big name to his unbeaten streak. And this Saturday, Brandao will get the choice of feet or floor, and T-City will hunt for the finish either way.

“This is another guy who has been around and he’s had his chance,” Ortega said. “They gave him a chance in the UFC to do something and he hasn’t really achieved it. He’s another big name that I’m going to get. If he wants to stand, then he’ll stand with me. I play the fight however it goes and see what he’s giving me. In my eyes, I see me showcasing my footwork now and my ability to stick and move and frustrate someone. I’m grateful and thankful for this opportunity. Now, I have a larger audience to showcase my skills to. I feel like I’m being put to the test to see how I can handle these Pay-Per-View cards, see how I can handle the pressure. To me, it’s a beautiful thing to happen to my career. I want to show the world who I am.”