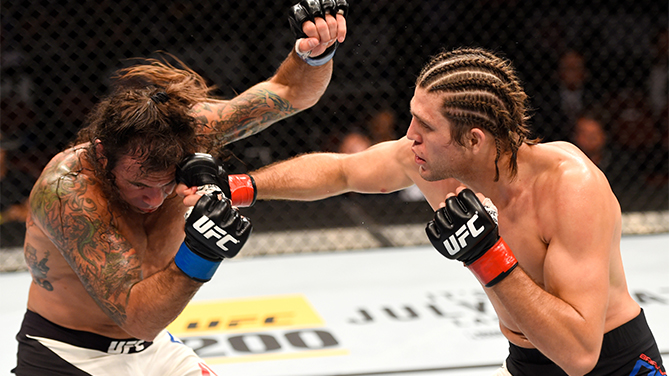 Featherweight rising star Brian Ortega broke open a close fight in the final round of his UFC 199 prelim bout at The Forum in Inglewood, California on Saturday, knocking out veteran Clay Guida with 20 seconds left in the fight.

Guida scored a flash knockdown in the opening minute of the fight and kept the pressure on Ortega throughout the round, showing off sharp striking while the Los Angeles native just couldn’t find a rhythm.

Ortega began to get his groove on in the second frame and he started landing more, but it was still a close round that could have gone either way. What was surprising was that Ortega didn’t seek to take the fight to the mat. Turned out he didn’t need to, as with less than a minute left in the third and final round, he drilled Guida with a right knee to the head that sent “The Carpenter” to the mat. One follow-up punch ended it, with referee Herb Dean stepping in at the 4:40 mark. 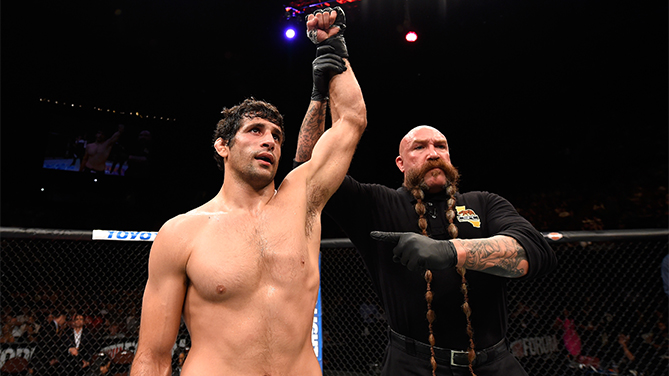 Lightweight contender Beneil Dariush made a quick turnaround from his April loss to Michael Chiesa and it was a triumphant one, as he handed James Vick his first pro loss via first-round knockout.

After an early going marred by a couple accidental eye pokes, Dariush opened the fight up by knocking Vick down. A ferocious ground assault followed, but Vick was able to get back to his feet and survive. Yet just when it seemed that he had his legs back under him, a left by Dariush rocked him again. This time, Dariush would not be denied, as a left sent Vick to the deck, with referee Mike Beltran immediately stepping in at 4:16 of the opening round. 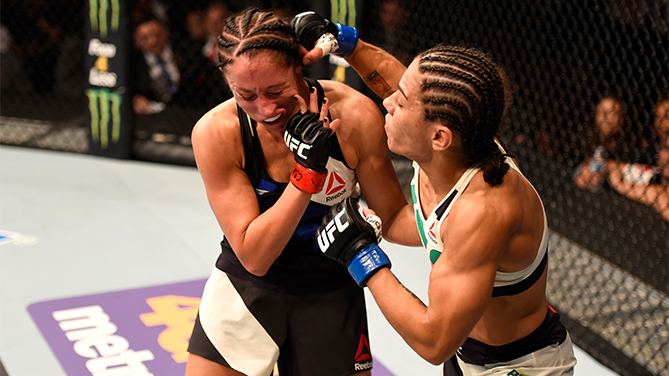 In her first bout at 115 pounds, Brazil’s Jessica Andrade immediately announced her arrival as a strawweight contender, dominating former world title challenger Jessica Penne before stopping her in the second round.

Andrade’s striking blitzes worked well for her in the first round, as she put Penne on the defensive and marked her face up. Eventually, “Bate Estaca” began going to the body, and as the round was coming to a close, Penne was almost stopped, as Andrade rocked and dropped her at the horn.

Penne looked for a takedown as round two began, but Andrade found her range again and continued to unleash her furious assault of punches. With no response coming back from the gutsy but outgunned Penne, referee Jason Herzog had no choice but to halt the bout at the 2:56 mark. 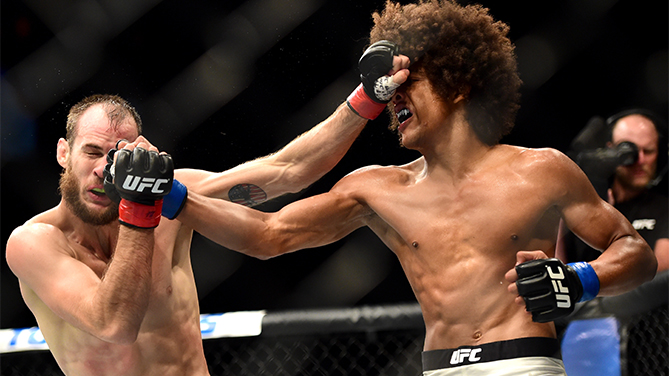 Caceres scored a flash knockdown in the first 20 seconds, drawing a roar to the crowd, but by the time they finished, Miller was up and scoring a takedown. Back on the feet, Caceres scored well with his kicks and straight lefts, rocking Miller briefly three minutes in. In the final 90 seconds, Caceres added two takedowns to his ledger, capping off a big round.

Looking better than he ever has in the Octagon, Caceres put together another dominant round in the second, with Miller a step behind throughout the second five minutes, unable to deal with the speed, movement, and offensive variety of “Bruce Leeroy.”

Showing the heart and skill of a veteran, the bloodied Miller nearly turned everything around in the final round when he nearly sunk in an armbar, but Caceres escaped and returned to a standing position. In the final minute, Miller surged again, but fell short with a rear naked choke attempt, allowing Caceres to make it to the final horn.