If there were any questions about the legitimacy of Rafael dos Anjos’ title reign, the champion blew them up in Orlando on Saturday night. 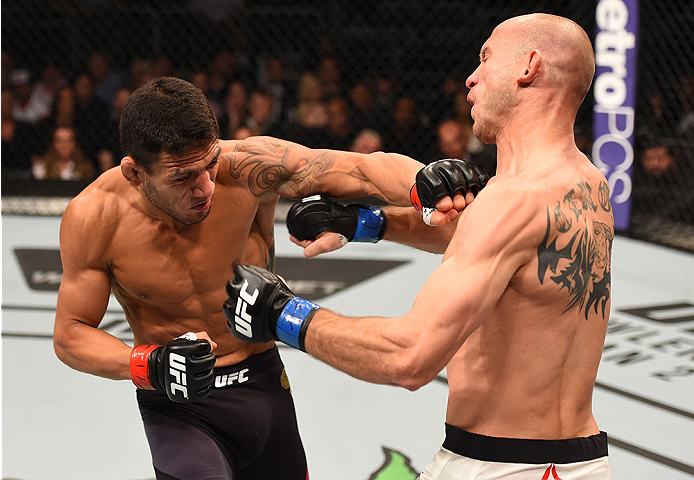 In a stunning sequence that began with a kick to the body, along with a two-punch combo that rocked challenger Donald ‘Cowboy’ Cerrone, and ended with a ferocious barrage of punches that forced a TKO stoppage, dos Anjos proved his March destruction of former champion Anthony Pettis in March was no fluke.

After the fight, dos Anjos gave props to Cerrone but wasted no time calling out “The Notorious” Conor McGregor. The Irish sensation is fresh off his UFC title win, but his camp has indicated that he plans to move up to 155 pounds in an attempt to become a two-division champion.

Dos Anjos was one of two fighters, including Nate Diaz, who called out McGregor at Fight Night Orlando. But the defending lightweight champion has the gold, which likely will garner McGregor’s full attention.

“Hey, Mr. McGregor -- If you want to come to lightweight division, this is my division,” dos Anjos said. “It’s better you stay in featherweight division. I would fight you in Brazil; I would go to Ireland to face you there; whatever you want. I’m here to stay.”

The most impressive reality of dos Anjos’ domination of the lightweight division may be his remarkable striking improvement since his first Octagon appearance at UFC 91 in 2008.

Back then, dos Anjos was a jiu-jitsu fighter who needed to find a way to the mat to be successful.

Consider this: In dos Anjos’ first 27 fights he only managed two finishes by KO or TKO, and one came by way of doctor’s stoppage. In his last five, the Brazilian has three knockouts and has evolved into one of the most dangerous strikers in all of MMA.

“Master Rafael knows how to treat fighters and he’s been helping me a lot,” dos Anjos said. “Stand up fighting is what I like to train. I enjoy training boxing and Muay Thai, and I think that’s why I am able to improve.”

So dos Anjos plans on getting even better? That is a huge problem for anybody fighting at 155 pounds.

2. The ‘Reem is living the dream

After three losses in four fights, Alistair Overeem seemed to be on the downside of his career with the end in sight. But the former Strikeforce heavyweight champ had other plans.

Overeem has now run off three wins in a row since then, and he put an exclamation on his title contender status with a second-round knockout against former UFC heavyweight champion Junior Dos Sanos in the co-main event of Fight Night Orlando.

Using a very cautious game plan, Overeem knew he was going to have to pick his spots while dealing with the overwhelming power of Dos Santos. So he waited on the outside for his opening, landing only seven strikes to JDS’ four in the first round.

When the opening came, Overeem landed a counter left hook to floor Dos Santos before finishing by TKO.

Now Overeem potentially awaits the winner of Cain Velasquez and Fabricio Werdum for the heavyweight title at UFC 196 in Las Vegas.

3. The real Nate Diaz showed up in Florida

It was a big moment for Nate Diaz against rising contender Michael Johnson, and one of the original bad boys of MMA delivered.

Diaz baited the Blackzilian power puncher into a boxing match, and he out-executed Johnson, delivering crisp combos and putting on a head movement display.

With the win, Diaz places himself back among the Top 5 of the lightweight division, and he makes a very strong case for himself to potentially welcome UFC featherweight champion Conor McGregor to the division in 2016.

Diaz called out the Irishman, declaring that he is the money fight at 155. Diaz said earlier in the week that McGregor stole the blueprint for becoming a star from Diaz, and he’s eager to set up a super fight with the new featherweight champion.

That would be fun.

Karolina Kowalkiewicz made her anticipated UFC debut against a tough test in No. 7-ranked strawweight Randa Markos.

Going into the bout, Kowalkiewicz had a tough draw getting a veteran like Markos right out of the gates, but the newcomer was game for the challenge. She took every power punch from Markos and used her combos and eye-opening hand speed to keep Markos off balance.

The scouting report on Kowalkiewicz before Saturday ready like this: a well-rounded fighter who isn’t great in any one area. But she not only showcased some high level technique in her striking, she ate some big shots and showed off her toughness.

While the talk will quickly shift to a potential showdown with fellow compatriot and strawweight champion Joanna Jedrzejczyk, Kowalkiewicz is just getting her feet wet in the UFC. That potential blockbuster still sits quite a way down the round.

5. Welcome back McCrory and Marquardt

Both in very different situations at Fight Night Orlando, Tamdan McCrory and Nate Marquardt needed wins for their own reasons.

McCrory had been out of the game for almost five years while dealing with some personal issues. Marquardt hadn’t won in a while heading into his bout with CB Dollaway, dropping five of his last six and was maybe on his final chance in the UFC.

But both guys seized the day beginning with McCrory, who ended a three-fight win streak for Josh Samman, mauling the former TUF competitor for 14 minutes before pulling off a crazy triangle choke finish from his back. “The Barn Cat” showed why he was a rising star all those years ago, pushing the pace and making Samman work every moment of the fight.

Marquardt has been a bit stationary in his last few fights, which has gotten him into trouble. He looked to be falling into the same pattern again against Dollaway, but as an impatient “Doberman” kept coming forward to try and land, Marquardt landed a perfect straight right that knocked Dollaway out cold.