"I’m a fearless fighter and I’ll fight anyone, so he’s going to have his hands full on the night for sure." - Brendan O'Reilly 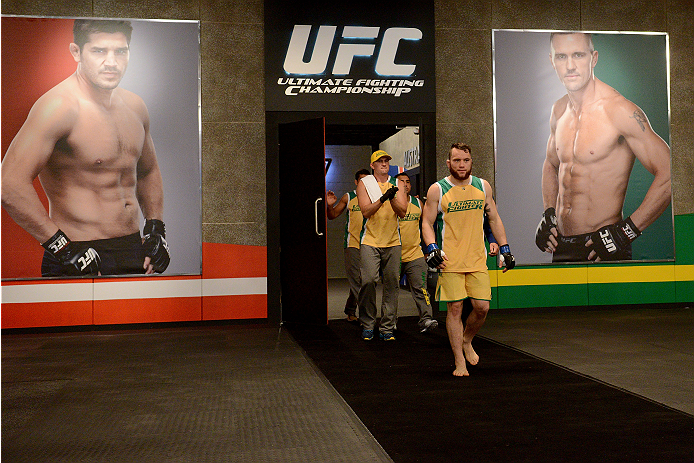 The Ultimate Fighter is not for everybody.  The ordeal of spending weeks on end away from loved ones, all while being stuck in a house with your competition often proves too much.  Over many seasons, personalities have clashed, tempers have frayed and tantrums have been thrown.

But the pressure cooker that was The Ultimate Fighter Nations: Canada vs Australia did not get the better of Australia’s Brendan “Badger” O’Reilly, who fights Zhang Lipeng Saturday at Macao’s CotaiArena in the lightweight division.

Despite losing his fight in the tournament against Kajan Johnson via first round rear naked choke, O’Reilly thrived in his new environment. While the “Badger” did get involved in some TUF Nations house hijinks and arguments, he continued to work hard to demonstrate that he belongs in the UFC.

O’Reilly believes it’s that approach that’s earned him a second chance in the UFC’s Octagon without having to rack up more wins on the local circuit first.

“I thought that may be the case (I may have to earn my way back to the UFC through fighting in smaller organizations) but I also felt that during the rest of my time in the house I really represented myself well and showed what I could do,” O’Reilly said. “I had a really good work ethic and performed really well in every task we had to do in the house after that initial fight, which happened very early in the piece.  I expected the worst as far as having to fight in smaller promotions and work my way back, but I think maybe the UFC saw that I had what it takes to be at that level.”

Former stablehand and horse trainer O’Reilly competed in the welterweight division on TUF nations, despite being most comfortable at lightweight.  But O’Reilly does not believe that was a factor in his loss to Johnson.

“To be honest I don’t think that in that early fight it (fighting at welterweight) was a big disadvantage.  I think that long-term me staying at welterweight would have been a disadvantage.  But I can’t blame being in a different weight division for that performance. That was down to me making bad decisions and not being composed and being tired from the trip over, but it definitely wasn’t due to weight, no.”

O’Reilly’s next opponent, Zhang Lipeng, will enter the fight with momentum after winning The Ultimate Fighter: China in March.  O’Reilly sees Zhang as a fighter who will be tough to finish, but believes his tactical approach will give him the edge over his 24-year-old opponent.

“He looks like a pretty durable, battle-hardened opponent.  I think that’s gonna make for a really challenging and fun fight.  I think I’ve got a number of advantages over him, some of them I don’t really want to say at this stage, but I’ve always been a tactical fighter,” O’Reilly said. “And I think that’s an advantage for me. I maybe haven’t shown that, or haven’t had to show that in some fights just because I’ve physically dominated guys.  But yeah, I think that’s obviously an advantage.  I’m a fearless fighter and I’ll fight anyone, so he’s going to have his hands full on the night for sure.”

“Not necessarily (do I think I will submit Zhang Lipeng); I don’t see it as a likely outcome but I see my submission skills as a threat that’s always gonna be there that he’s gonna have to be careful of. But boxing is something I’ve done the longest, and it was the first martial art (I started training in),” O’Reilly said. “I’ve had straight boxing fights, unlike a lot of guys in MMA. I think he’s gonna have trouble anywhere, so I’m not going to try and predict where it’s gonna go and what’s gonna happen, I’m just gonna believe in my skills as a mixed martial artist and put the heat on him in all ranges and I’ll find where he’s weak and I’ll break him there.”

O’Reilly’s career in the UFC is just beginning, and he hasn’t yet secured the big pay checks and sponsorships that will finance full-time training.  Consequently, O’Reilly continues to juggle his job as an MMA coach while preparing for fights.

But this time around, O’Reilly has a little extra help, inviting his fans to donate to his training camp in a crowd-funding campaign.

“The crowd-funding campaign is going really well.  I’ve got such supportive fans from not only Australia but across the world; it blows my mind how much support I get from all these people.  And it was just a great opportunity for them to jump on board my team and feel as though they're part of the team so they can get some merchandise through the crowd funding campaign,” O’Reilly said. “(I’m sharing) Some more personal stuff like crayon art and writing them some notes and that sort of thing, and it’s got a bit of a funny side to it, but it’s just allowed people who support me a lot to get behind this training camp and feel as though they’re a part of it and they’re on the journey with me.  It’s going really well and everyone’s being really supportive and I’m really appreciative. “

Talk to O’Reilly and it quickly becomes apparent that while he is serious about his training, the Aussie enjoys laughing at himself.

“Definitely (I don’t take myself too seriously). I obviously take my training and my career as a fighter very seriously but I can laugh at myself and I like to keep it pretty light-hearted. I like having mates around and being pretty chilled out.  That’s exactly what’s being reflected in this crowd-funding campaign,” O’Reilly said. “I would prefer someone to be my friend than to be my fan, and if people like me as a fighter, (as fans) I’d like to get to know them as a mate and let them know I really appreciate their support so I try to keep it light-hearted and not take myself too seriously and have fun with the people who support me.”

And as O’Reilly enters the Octagon on fight night, look for the proud outdoorsman to wear a classic piece of Australiana - the flannel shirt (or “flanno") - with his own unique twist.

“The flanno is just something that I’ve worn kind of forever; it’s something in Aussie culture that we wear in winter; it keeps you pretty warm and I just like them, it’s comfy casual wear for me and part of the Badger’s summer collection is cutting the sleeves off the flanno,” O’Reilly said. “It’s been a bit warm lately so I’m gonna be wearing that out for the fight just to show the world how terrible my fashion sense is. I think it’s gonna be good. I’m gonna try and start a bit of a revolution with cut-off flannos worldwide so we’ll see how we go.”