Like or hate, Covington believes you'll want to watch his fights

From the first time he stepped into the Octagon, it was clear that Colby Covington could fight. Then again, everyone in the UFC can fight. So what was next for the former college wrestling standout?

Probably not what you would expect, but as “Chaos” heads into his Fight Night Sao Paulo co-main event against Demian Maia, he is a young man proudly wearing a black hat as he heads into Maia’s hometown.

“I wanted to get noticed, and there’s only one way to get noticed: make people hate you,” Covington said. “And whether they like me or hate me, they’re gonna want to watch me fight. So if they want to see me get my head knocked off, even better. That means I’m going to get the bigger fights and the bigger opportunities against the guys they think can knock my head off. It’s nothing personal. It’s business now, and if you know who I am as a person, then you wouldn’t judge anything about what I’m doing.”

What Covington has been doing over the last year is basically calling out the entire welterweight division, jabbing at the elite on social media, with a particular target being 170-pound world champion Tyron Woodley. But Maia has also received his barbs, drawing no response from the soft-spoken former world title challenger. Covington doesn’t care, and he’s not stopping either.

“This is the fight game,” he said. “Somebody’s gonna have to sell the fight and promote it. If Demian doesn’t want to engage in trash talk and get fans excited to see the fight, then I’m gonna do it. People can hate on me for talking trash to him, saying he’s a nice guy and all that. Okay, we’re going in there to fight. I want people to be excited about it and get drawn in and I’m gonna talk smack and be entertaining and I’m gonna put on a good performance for the fans.”
READ: Maia uninterested in Covington's trash talk

It’s the ultimate example of put up or shut up, and the 29-year-old Covington loves the pressure that he’s placed on his own shoulders. Already 7-1 in the UFC and riding a four-fight winning streak, the California native sits at No. 7 in the current welterweight rankings, and a win over the No. 3-ranked Maia could land him in the title picture. A loss, and that’s trouble.

But he’s only thinking about winning.

“The more I talk and the more things I say, I’m a man of my word and I’ve always backed up my word, so it’s only made me prepare harder, train smarter and more diligently, and be prepared to do everything I said I’m gonna do,” he said. “There’s nothing like going to someone’s backyard and really making a statement. If you want to make some statements in the UFC, you’re gonna have to go to enemy territory and be the bad guy and get the boos, and that’s what I’m doing. I’m making the sacrifices to go over there, beat these guys up and come back and show that I’m ready for the world title.”

It’s an interesting method, but it’s worked for Covington, who has defeated Jonathan Meunier, Max Griffin, Bryan Barberena and Dong Hyun Kim leading up to this weekend. Maia is a whole other animal, though, but Covington insists he’s ready for the jiu-jitsu wizard. 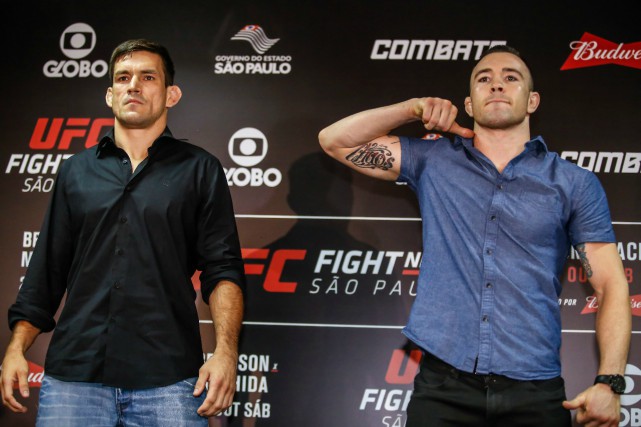 “I’ve got to be patient and not overextend myself,” he said. “He (Maia) is gonna come out and do what he always does. He’s one-dimensional. He’s an old dog and he hasn’t learned any new tricks, so he’s gonna come forward and try to take me down and try to use his jiu-jitsu, but he’s not going to be able to take me down. I will defend his takedowns and I will hurt him with my strikes. It’s a different fight than he’s had to fight. He fought Tyron Woodley and he couldn’t get him down, and Tyron Woodley isn’t even on the same level of wrestling as me.”

In describing this weekend’s bout, Covington is fond of using the phrase “Nightmare in Sao Paulo,” and he makes it clear that he won’t be on the receiving end of that nightmare.

“This is a different fight and I will hurt Maia and I will put him to rest,” he said. “And the Brazilian fans will be mad at me at that time, but they will thank me later because he will be in my highlight real for the rest of my career and we will pay tribute to Demian Maia.”

If Covington pulls his prediction off, then expect him to put on the full court press to get a fight with Woodley, and some would say he’s already started that on social media. That could be a good or bad thing, considering that he has a fight in front of him to win first, but this welterweight contender is not backing down. He’s come too far for that.

“I feel like everything’s getting closer and this puts me on the doorstep,” he said. “And if Tyron Woodley is not gonna open the door, I’m gonna bust it down. I do feel like I’m next for a title shot. This is my time now. Tyron Woodley has something that belongs to me and I’m coming to take it soon.”