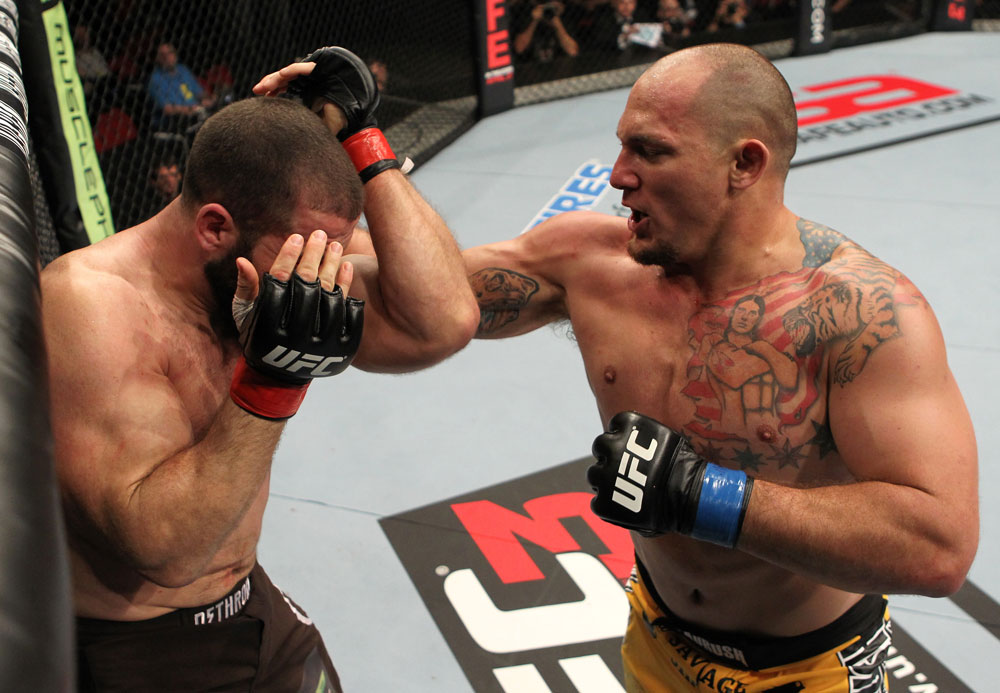 Lost in the frustration of what felt like a never ending string of injuries and changes to the summer fight schedule are the opportunities these shifts bring for the fighters who are called upon to step in for their fallen colleagues.

One man’s bad break is another man’s good fortune.

That’s how Shawn Jordan came to be a part of the UFC’s debut event in Calgary, Alberta, where the former LSU football player will share the cage with one of the heavyweight division’s longest tenured veterans, Cheick Kongo. When Antonio Rodrigo Nogueira announced he’d be unable to return at UFC 149, it was the 27-year-old with just one previous Octagon appearance under his belt that got the call. Thankful for the opportunity, Jordan plans to make the most of it on Saturday night.

“You know, I ‘m really excited about this card, and the opportunity I was offered to fight Cheick Kongo,” explained Jordan following an afternoon training session with the all-star cast of coaches and teammates that comprise Team Jackson-Winkeljohn. “He’s a really well known veteran who has helped build the division to what it is today, so it’s really exciting for me to have an opportunity to compete against such a prestigious athlete.

“It’s kind of nice to know that they can call on me, count on me, and that they feel confident enough that I’ll put on a good performance; that I’ll come in there and fight. Again, they’re throwing me in there with a great fighter, and they’re giving me that opportunity after one fight in the UFC, so it’s a great feeling, and it makes me feel pretty confident in the fact that I am available to them and able to compete at this level.”

Jordan transitioned to the UFC roster when it was decided that Strikeforce would no longer maintain a heavyweight division. While the likes of Fabricio Werdum and Antonio Silva garnered the majority of the attention, people who remembered his two fights under the Strikeforce banner knew to keep an eye on the compact bundle of potential known as “The Savage.”

After fighting almost exclusively in his native Louisiana to begin his career, Jordan started garnering greater attention when he stepped in on a week’s notice to replace Lavar Johnson opposite veteran Devin Cole at a Strikeforce Challengers event about a year ago. Though he lost by unanimous decision, he showed plenty of promise, the athletic ability he displayed as a fullback on a pair of National Championship winning teams at LSU still present now that he had traded the gridiron for the cage. Two months later, Jordan faced off with Johnson, earning a second-round submission win over the heavy-hitting knockout artist, showing another glimpse of his potential in the process.

Just 15 fights into his career, Jordan stepped into the UFC Octagon for the first time in March, earning a second-round technical knockout win over former British strongman champion Oli Thompson in a highly entertaining contest that was punctuated by Jordan sticking the landing on a celebratory backflip in the center of the cage.

“It was a good feeling; almost a sigh of relief,” explained Jordan. “You’re coming into the UFC, everyone’s expecting the level of competition to go up, and you have to perform better, so it’s one of those things where you get a little nervous, the anxiety builds up, but once it’s over you say, `Wow — I’m supposed to be here. I can do this.’ It was a great feeling to be able to compete in my first UFC match, do well, and perform in a different country at that; the Australian fans are great.

“Finishing that backflip was nice,” he added with a laugh. “I don’t usually mess that up too bad, but against Devin Cole I almost ate it the first time I tried it.”

With a win in the UFC under his belt, Jordan returned from Australia, spent a little time at home, and headed right back down to Albuquerque, New Mexico to help his teammates prepare for UFC 145. Plus, he had a feeling his phone might ring too. Anyone worrying that the reduced timetable to get ready for this fight might leave him under-prepared when the cage door closes in Calgary can rest assured that Jordan will be at his best on Saturday night.

“I was actually in camp helping Jon (Jones) and Travis Browne get ready for their fights April 21st. I went back home, took care of some stuff, but I had been in camp for a couple weeks already getting back in shape because chances were I was going to get a last minute call on something. At our camp, this is what we do; we show up, and we’re ready to fight, so I’m not really concerned (about the short notice). I’ll be ready for the fight.”

As you would expect, Jordan credits his time playing fullback on the perennial Division I powerhouse with helping him make the transition from football to MMA, and from fighting on the smaller shows to competing on the biggest stage in the sport. While the athleticism needed for both is certainly part of it, Jordan points to his ability to be coached and previous experience under the bright lights at LSU as two key elements that have aided him on his journey up the heavyweight rankings.

“Playing for a school like LSU, being in the spotlight, and playing in front of a 100,000 fans every time I came out to play really did help the transition to competing in front of however many thousand fans we have at the fights. It really helps with the fight anxiety, handling the pre-fight jitters.

“Football makes you very coachable,” he continued. “You’re used to listening, and then just going out there and doing it; you don’t need to be told over and over and over again. That aspect really helps the transition into the fight game. Playing for a team like LSU really, really changes it mentally for me. You see so many fighters come in, and they get broken pretty early. I think as far as the mental toughness aspect goes, I think it’s really hard to break guys that come in from football because we’ve been beaten and broken, screamed at and hollered at, broken and built back up to how they want us to be, so I think that really helps a lot.

“Moving up to Jackson and Winkeljohn’s gym, and having the opportunity to train with guys like Travis Browne and Jon Jones and Brian Stann and Buddy Roberts — all these accomplished fighters — really helps your confidence too,” Jordan added. “Being at that gym helps you see your potential, and see how well you can do as long as you put the work in.”

Despite his early success and the big opportunity before him at UFC 149, Jordan remains level-headed about his future, though that isn’t to say he’s hasn’t thought of what a win over an established veteran like Kongo this weekend could do for his career.

“I try not to get too far ahead of myself, and I think it’s another thing I get from football I suppose: I have to be ready for the next fight. It doesn’t matter who it is — the next fight is the most important one. Sure, I’ve beaten Oli Thompson once, but if it came up again, that would be the next biggest fight for me.

“A win over anybody is huge to me. I don’t like to lose, period; it doesn’t matter who it is. The fact that it’s Cheick Kongo, and he is a well-known veteran who has helped build this sport up is great for me at this point in my career. It would help propel me a little bit more in the heavyweight division.”

It’s been a little more than three years since Jordan stepped into the cage in Monroe, Louisiana and submitted Jayme Mckinney to win his pro debut. Since then, he’s made his way to the UFC, picked up a victory inside the Octagon, and is now poised to make his pay-per-view debut against a perennial contender.

“It’s kind of surreal almost,” Jordan said of his journey to this point in his career. “You start this sport because you want to get to the UFC one day; you want to compete with the best fighters in the world. Once you’re there and it’s in front of you, it’s like, `Cool. I’m here.’ It’s surreal; you don’t really expect it to be that soon, that quick, and then to come in, compete, and perform well, it’s a relief and a confidence booster at the same time.”

Jordan maintains a fairly basic vision of what happens whenever two heavyweights step into the cage, and as for Saturday night, he’s says he’s ready for whatever Kongo has to offer.

“We’re heavyweights: we come out there, we swing, and one of us usually ends up getting knocked out because we’re big guys,” he admitted with a laugh. “I’m fairly comfortable doing whatever. You want to grapple? Do submissions? Throw hands? I’m fine with whatever; whatever comes up.”

Injuries are a part of the sport, and they also create chances for emerging talents and relative unknowns to show they’re ready for bigger and better. Opportunity knocked and Jordan answered, turning Nogueira’s lingering ailment into his chance to move up the heavyweight rankings.

One man’s bad break is another man’s good fortune.