"Everybody who was in the house has to be congratulated and they are men of their word. Now it is time to make our path outside.” - Sergio Moraes 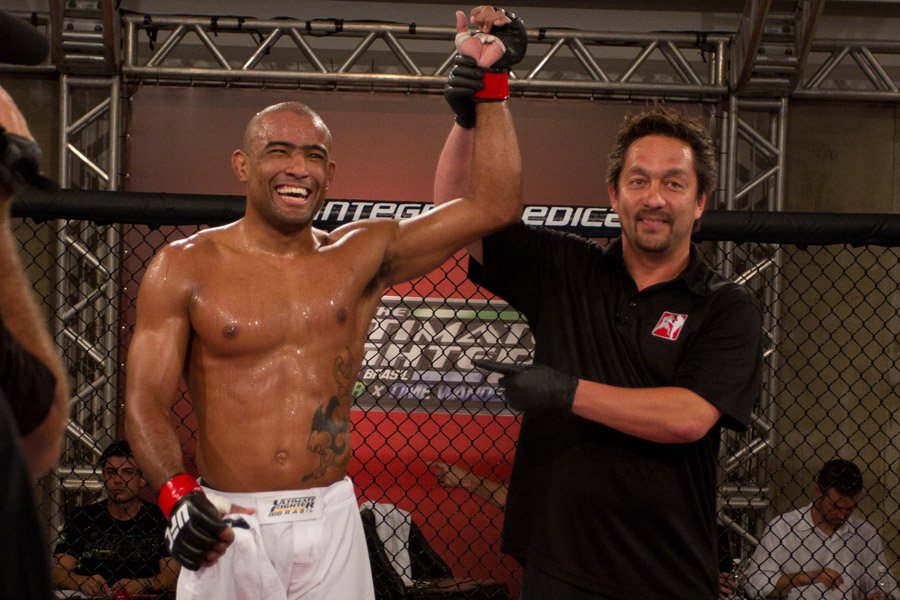 Sergio Moraes almost couldn’t believe it when he heard that he was getting a chance to face Cezar “Mutante” Ferreira at UFC 147 this Saturday in Belo Horizonte, Brazil.

Eliminated in the semifinals of The Ultimate Fighter Brazil by Daniel Sarafian, Serginho got the news that Ferreira’s opponent on the show, Sarafian, was not able to fight in the final of the show. Later, during a camp in Curitiba, where he was taking the opportunity to improve his Muay Thai, the fighter accepted the chance to step in and fight against “Mutante” on the spot. Now he will be on the main card, again with the chance to achieve his dream, a contract with the UFC.

Coming from a humble childhood and raised in a poor community in São Paulo, Moraes started to have contact with fighting through capoeira and jiu-jitsu, in which he has already won the world title three times. But it’s the contract with the UFC that means a change for his family, and the situation that put him in the finals was a surprise he’s grateful for.

“I would never want for Sarafian to get hurt, because he earned his spot in the final, but it happened and I was already training hard. I went to Curitiba to work on my standup game, and when I heard I was going to face ‘Mutante,’ I intensified my training even more,” he says.

On TUF, Moraes was knocked out by Sarafian, and the setback made him realize the importance of improving in other areas of MMA, and for that, he counted on some strong help.

‘I trained with André Dida and Mauricio Shogun’s team. When I got on the reality show, I was thinking about the jiu-jitsu world championship, and I wasn’t training my MMA game up. As soon as I left the house, I could only think about correcting my mistakes. My defeat happened, but I quickly raised my head and thought of a better way to work on my flaws. The opportunity of working with Shogun and Dida came, and everybody knows that Curitiba is the birthplace of the best stand up athletes,” he said.

His participation on TUF gave Moraes distinct experiences. There, Serginho lived through so many things, including the thrill of the victory and the sadness of elimination. Now, the black belt feels like a more mature and well prepared fighter.

“It was a new experience. We were living next to our opponents and even the training partners could turn into our opponents in a minute. We had to make weight three times in a month. These are very different situations and I think we left there ready for anything. Everybody who was in the house has to be congratulated and they are men of their word. Now it is time to make our path outside,” said Moraes, who continues:

“Today, I see myself as a more complete fighter. Of course my main skill is jiu-jitsu, but I’m good in any situation. I think I’m ready to trade with “Mutante,” and I’m in no hurry to go to the ground. If the fight happens standing up, that’s how it’s going to be.”

In three fights on TUF Brazil, Ferreira won by submission twice and knockout once. On his 4-2 pre-TUF record, he has three knockouts and one submission, and in his losses, he was submitted and knocked out. So, if you take into consideration these statistics, none of Ferreira’s fights went to a decision, and while he is very dangerous, he leaves some gaps. Moraes isn’t concerned about the numbers though. He just sees a very exciting fight with a tough opponent, but not an unbeatable one.

“He is a new athlete in MMA,” said Moraes. “He is not a specialist in any area, but he does well in several areas. Since the beginning he got used to training a little bit of everything. He is a modern athlete, well rounded.”