There Is Only One Derrick Lewis

Sitting down to speak with Derrick Lewis is an adventure, and even he doesn’t know where it’s going to end up.

For every question that gets a comedic or cutting answer, there is one where the perennial heavyweight contender drops his guard and genuinely lets you in, and there is no telling which type of response you’re going to get.

There is no pattern to it, no way to get through his defenses like all those early-stage characters on Mike Tyson’s Punch-Out — you can’t wait for “The Black Beast” to get two jokes off and expect something deep next the way you could time Bald Bull’s charge or target King Hippo’s belly; you just have to ask your question and see what happens.

“What does Bob mean to you?” the producer asked Lewis, seeking the heavyweight’s thoughts on his head coach and close friend, Kru Bob Perez, as they spoke ahead of Lewis’ return to action this weekend against emerging contender Chris Daukaus.

“What does Bob mean to me?” Lewis asked back. “Nothing — I hate that m*therf*cker! We’re moving on. Next question.”

A smirk snuck out the side of his mouth, his eyes alight with enjoyment. The producer doubled up, asking him the same question again, and this time, Lewis was unable to contain his laughter as he tried to dismiss the question for a second time.

“He’s a cool guy — little short dude,” he finally said. “He really helped me stay straight and be positive — makes sure I don’t steer off the path that he knows I need to be on, so he’s a good guy to be around.”

Even offering slightly comedic praise about his long-time coach is a challenge for Lewis, a deeply private man whose skills inside the UFC Octagon have made him a cult figure in the mixed martial arts world and one of the top heavyweights in the sport.

He doesn’t like talking about his life in detail and tries to mostly steer clear of the major signposts that have become known parts of his backstory — the troubles that led his family from Westbank in New Orleans to Houston, Texas when he was a teen; the fracas that landed him on probation; or his time in prison.

He doesn’t like to talk about his fighting career much either, mostly because he feels he’s already said all that needs to be said on the subject, growing impatient and annoyed whenever he has to explain for the umpteenth time that his aim isn’t to be the best fighter in the world, but rather to make a living and take care of his family.

Before he became a mixed martial artist, Lewis worked for AAA driving a tow truck. It was an honest way to make a living and provide for his family, and while fighting in the UFC is a completely different type of pursuit, at the end of the day, he’s sees the two ventures as the same way: both are jobs; one just pays more.

If accolades come along the way, that’s cool, but it’s never been what Lewis is searching for when he steps into the Octagon.

“Having the most knockouts in heavyweight history, I guess it’s cool because the sport has been around over 25 years,” began Lewis, who set the mark in February with his second-round stoppage win over Curtis Blaydes. “A guy like me having a record like that compared to all the great guys that came before me, and they couldn’t accomplish what I did, it’s pretty cool if you think about it, but it doesn’t really mean anything.

“I don’t get paid more just because I’ve got the most knockouts or whatever,” he added. “It’s still pretty cool though. Hopefully one day I’ll be a Hall of Famer of some type, but if not, I don’t care.” 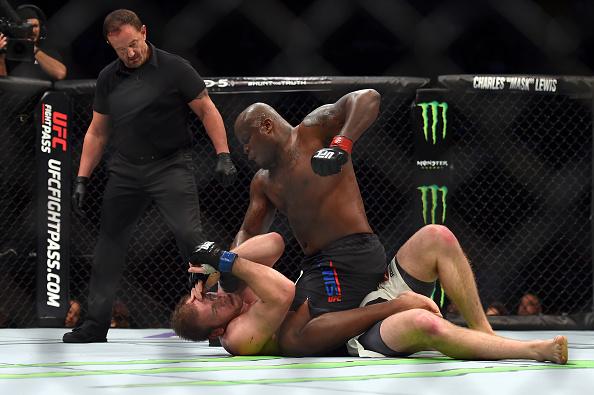 Derrick Lewis punches Viktor Pesta in their heavyweight bout during the UFC 192 event at the Toyota Center on October 3, 2015 in Houston, Texas. (Photo by Jeff Bottari/Zuffa LLC)

Everything is a balancing act with Lewis — a mix of not wanting to sound too full of himself or like he takes himself too seriously, playing things close to the vest, and throwing out wild comments designed to keep people from probing for deeper insights — because at the end of the day, he’s not particularly comfortable with all the attention or the recognition, and it can be overwhelming for him at times.

It was this summer when he faced off with Ciryl Gane for the interim heavyweight title in the main event of UFC 265 at Houston’s Toyota Center.

While most looked at the home game as an added advantage for the beloved knockout artist, who has become one of the city’s favorite sons for his efforts within the community and genuine love for Houston and its people, Lewis admitted that it was too much for him to contend with.

“I used to always dream about fighting in Houston for the world championship,” explained Lewis, pulling back the curtain on his experience leading into his fight with Gane, which ended in a third-round stoppage win for the unbeaten French standout. “I didn’t think I would be that much of a nervous wreck being here, fighting in Houston — I didn’t think it would take a toll, make a difference in the fight, but it really did. I don’t think I’ll be doing that again any time soon.

“Fighting in your city, sometimes it can make or break you, and I believe that the build-up to the fight really broke me,” he added. “The nerves really got to me because I wanted to really perform very well for my city. I would have meant a lot.”

It’s clear that the loss weighs on him, probably more so from a personal standpoint than a professional one; the disappointment of not coming through for Houston paramount to having a loss currently sitting atop his record, though that part doesn’t sit all that well with him either, which is why he’s hustling back into the Octagon this weekend.

While a four-month gap between appearances is fairly standard and the longest amount of time most fighters would ever really like to take between fights, it’s an expedient return for Lewis, who has alternated between competing in February and August each of the last two years.

“You really got to get back in there real quick,” he said when asked his thoughts on bouncing back from defeat. “You can’t sit around and dwell on it because it will eat you up. You really gotta get out there and get that taste out of your mouth — go out there, perform well, get some type of revenge.

Holly Holm To Be Inducted Into Boxing Hall Of Fame

Saturday’s clash with Daukaus is a pivotal one for the heavyweight division, as Lewis currently stands as a two-time title challenger and established contender, while the surging former police officer from Philadelphia enters with a 4-0 mark inside the Octagon and designs on closing out the year with the biggest win of his career.

Lewis, as always, isn’t particularly familiar or concerned with what Daukaus brings to the table, believing that when he’s locked in, there’s not a man in the division he couldn’t defeat.

“My coaches told me that he’s a striker, but it really don’t matter,” said Lewis when asked about his main event opponent. “I don’t care what these guys do — if they’re a wrestler, striker, or whatever; it don’t matter. It’s a fight. I’m going in there to fight. 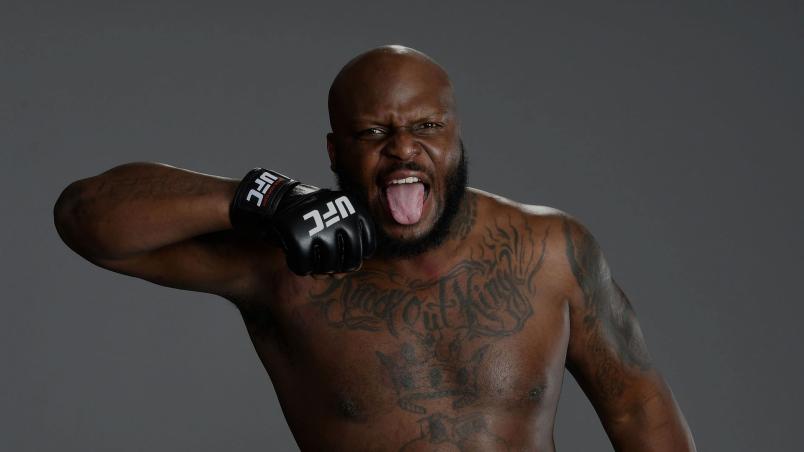 Derrick Lewis poses for a portrait after his victory during the UFC Fight Night event at UFC APEX on February 20, 2021 in Las Vegas, Nevada. (Photo by Mike Roach/Zuffa LLC)

Truer words have never been spoken, which is kind of funny, since there are plenty of times when Lewis is just making stuff up as he goes.

“That’s why I say crazy stuff all the time — I don’t like talking like this, telling everybody my business,” he said with a laugh after explaining that his ultimate goal as a fighter would be to create a hologram that could handle his media obligations for him. “I’m a very private guy.”

A private guy with an incredible story, a gigantic heart, dynamite in his hands, and a sense of humor that might be as lethal as his fists.

“Why do you trust Bob?” the producer asked, trying to pry some genuine thoughts about his coach from Lewis.

“So why do you trust Bob?” the producer asked again.

There is only one Derrick Lewis.