One Win Down, Many More to Go for Askham 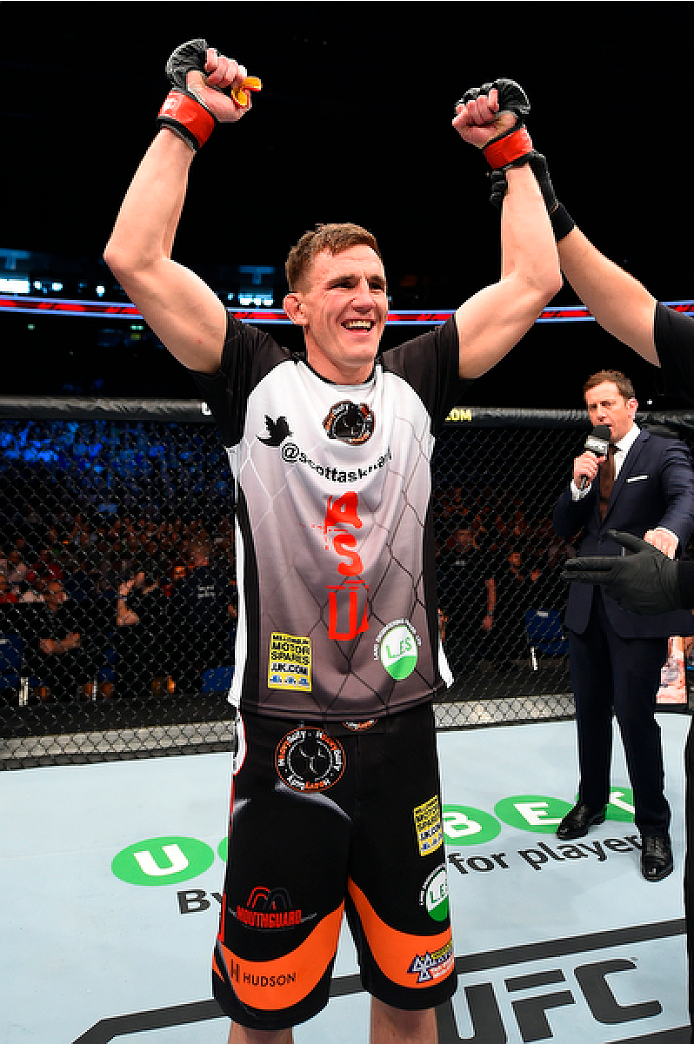 Scott Askham has never appeared to be the rah-rah, emotional type. He straps his gloves on, puts in his mouthpiece, and then it’s off to work. When it’s done, a quick smile, a nod to the crowd, and then the cycle begins again.

So while some may call the aftermath of his knockout of Antonio dos Santos an aberration, let’s just call it another glimpse of the Doncaster native’s personality.

“It was a big part of my career, a massive win, and I was excited,” he laughs, recalling his leap to the top of the Octagon after the first-round victory. “It was the biggest buzz of my life.”

Not just for the 27-year-old, but for the legion of family and friends who traveled to Berlin to watch him pick up that win in impressive style.

“As you could see, they were all cageside, and when they jumped up and we were celebrating, it was something that I’ll never forget,” he said. “I enjoyed it and I can’t wait to do it again.”

Askham and his army of supporters get that chance seven days from now, as he makes the trip to Dublin to face Poland’s Krzysztof Jotko in UFC Fight Night action, and “army” is not an exaggeration, as he expects a hundred plus to be in attendance at the 3Arena for his third UFC bout.

These are good times for Askham, who made a positive impression in his Octagon debut against Magnus Cedenblad in October of 2014, only to lose a unanimous decision, his first defeat as a pro. But with a change of camps and surgery to fix up his banged-up elbows, he was back to his winning ways against the Brazilian, showing off his rangy striking attack before closing the gap and finishing things at the 2:52 mark. The way he sees it, this was his proper UFC debut.

“A hundred percent,” he said. “I’ve done a lot of changes since my loss. I moved camps, changed everything up. I travel to Manchester, which is like an hour and a half away from my house every day to get the training I need to be where I want to be. And that fight in June, I proved that I deserve to be there and this next fight is about earning my spot and trying to climb that ladder.”

Working with the ASW (Atherton Submission Wrestling) team, Askham and two teammates make that daily trip to Manchester, and though it’s a haul, especially for a family man, he’s not complaining.

“It’s part of the journey, and I don’t mind it, to be fair,” he said. “There are three of us that travel over, so we have a good laugh and we take turns driving, and it’s not too bad. It’s a good time to think about what’s coming up and about training stuff. I also do a bit on social media sometimes to let people know what I’ve done.”

“I’m not a person that can just fall asleep anywhere,” he laughs, “so I generally drive there and they drive back.”

That grind is what makes or breaks fighters, and Askham, 13-1 and rising in the middleweight division, is embracing the work that it will take to bring him to another level in his career, and though getting his first Octagon win was a big deal, it’s only a start.

“You’re fighting in the UFC and every fight you’re fighting for your life,” he said. “It means so much to me to be a part of UFC and I don’t want to be one of these fighters that is just here, there, and up and down with a few wins. I want to start a win streak and show that I deserve to be there and deserve to be in the rankings. So for me, it’s the same attitude. I’ve attacked this training camp just how I attacked the last one, and we’re going to go out there and look for the same result.”

Jotko, 15-1 as a pro, is also on the rise at 185 pounds, and while he’s coming off a win over Tor Troeng, that victory came in October of 2014, with a bout on the same card as Askham-Dos Santos falling apart due to the removal of prospective opponents Derek Brunson and Uriah Hall from the card. Askham, with eight first-round finishes on his record, might want to start fast and test Jotko’s cardio after the layoff, but the Yorkshire product is preparing for the long haul against his fellow prospect.

“He’s an experienced fighter, he’s done three rounds plenty of times, and most of his career have been decisions, so he’ll have enough gas to go the three rounds,” Askham said of Jotko. “But I do want to go out there and let him know that I’m there and start landing those clean shots, and then take it from there.”

And perhaps when all is said and done next week, he’ll secure that bonus he’s been waiting to take home to his wife and daughter.

“I’ve got that mentality with that bonus in the back of my mind, and I’m always going to be a contender for it,” Askham said. “I lost my debut, but I hit him with a clean front kick on the chin and dropped him on his back, and then I got the finish in Berlin. So I’m getting closer to these bonuses, and they’re keeping me hungry. Hopefully I’ll get one very soon.”

“That is the plan,” he laughs, but Askham is in no rush, either in a fight or with his career. This is a marathon journey for him, one that will end with a lot more than one win or one bonus.

“Getting the first win in the UFC was a big part in my career,” he said. “But I’ve always said it’s not about getting to the UFC; it’s about staying there. I want to end my career in the UFC, and getting the first win is the first stage. I’ve got a lot of personal goals I want to achieve in UFC, and I’m just going to tick them off as I go along. Some are easily achieved, some are not so easily achieved, but one is already ticked off, and there’s more to go.”