One of the oldest fighters on the planet, Hunt still not ready to hang up his gloves 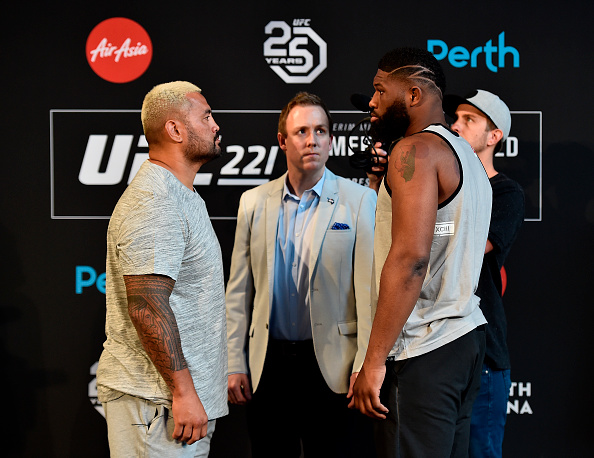 Mark Hunt of New Zealand and Curtis Blaydes face off during the UFC 221 Press Conference at Perth Arena on February 7, 2018 in Perth, Australia. (Photo by Jeff Bottari/Zuffa LLC/Zuffa LLC via Getty Images)" align="center" />
Mark Hunt wasn’t supposed to be here.

I don’t say that in a Dante Hicks working the Sunday shift at the Quick Stop when he’s supposed to be playing road hockey kind of way, but simply as a statement of fact.

After Hunt’s contract was acquired as part of the company’s purchase of PRIDE, the UFC was ready to buy out the remaining fights on his deal and allow the knockout artist to pursue employment elsewhere. At the time, Hunt was in the midst of a five-fight losing streak that dropped his record to 5-6 overall, and while he’d shared the ring with and held victories over some of the most iconic fighters of the time, he was in his mid-30s and streaking in the wrong direction.

But Hunt wanted to keep fighting, wanted to compete inside the famed Octagon and after losing his promotional debut at UFC 119, “The Super Samoan” started putting together an incredible second chapter to his career.

Now more than seven years later, Hunt is set to step into the Octagon for the 16th time and begin what could be the final year of his fighting career this weekend when he takes on Curtis Blaydes in the co-main event of UFC 221.

“I never wanted to be a fighter, but I became one of the best fighters in the world,” said Hunt, reflecting on his career. “I want to finish my UFC contract. I’d gladly fight three more times and then go from there.

“I love competing,” he added. “I am the oldest fighter on the planet (laughs) and it’s getting harder and harder to recover from training sessions, so you’ve got to think about it on a realist level. That’s probably the reason why (I’m thinking about walking away).

“Like I said, I never wanted to be a fighter – fighting just came and saved my life and that’s what I’ve been doing for the last 28 years and as a pro for about 20 years.”

Though he can see the end of his nearly 20-year fighting career on the horizon, Hunt isn’t ready to hang up his gloves for good quite yet.

Entering this weekend’s showdown with Blaydes off a fourth-round knockout win over Derrick Lewis back in June, a quick glance at the 43-year-old knockout artist’s resume shows that Hunt remains in the thick of the chase in the heavyweight division.

He’s gone 3-1 (with one no contest) since his loss to current champ Stipe Miocic and has been chasing a rematch with Fabricio Werdum, whom he fought for the interim heavyweight title on short notice, since the two shared the cage at UFC 180 in Mexico City. If he can bring Blaydes’ four-fight unbeaten streak to a halt in Perth, a pairing with a Top 5 opponent next time out isn’t out of the question.

And a victory there could bring Hunt the opportunity to fight for championship gold before he closes the door on his fighting career.
RELATED CONTENT: Hunt featured on UFC Countdown | UFC 221 Fantasy Preview

“Hopefully I can rematch all these guys – Stipe, Alistair, Werdum,” said Hunt, who enters Saturday’s event with a 13-11-1 record with one no contest. “Fighting all those guys would be great. As I said, I like to compete.”

Regardless of how things shake out this weekend and over the rest of the year, Hunt will not only go down in the history books as a huge fan favorite with a collection of impressive performances to his name, but a pioneer in the sport, especially for competitors from Australia and New Zealand. 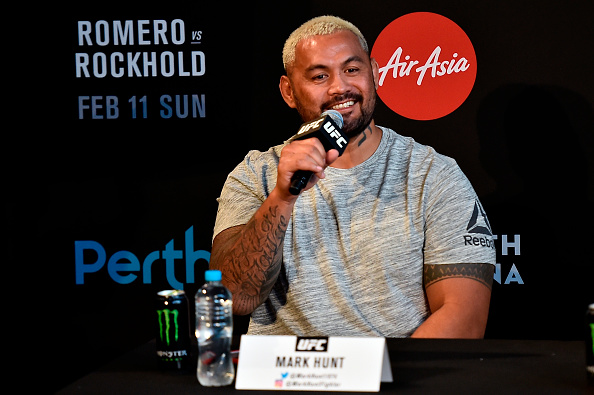 front of a packed house at Etihad Stadium.

Of the 12 previous events in Australia and New Zealand, Hunt has been a part of half of them, so it’s only right that he’s on the card this weekend as the UFC makes its maiden journey to Perth, where he’s joined on the card by young fighters he inspired like Tyson Pedro and Tai Tuivasa, who prepared for his sophomore appearance in the Octagon this weekend alongside Hunt on the Gold Coast.

“It’s good to be training with these guys,” he said of sharing the mats with the next generation of talent to emerge from the Australian MMA scene. “For me, I realize how old I am because they’re like half my age, but it also shows you how good I am because I’m still at the top end with these kids that are half my age.”

“It’s exciting for me, to be honest, being a part of history, especially with the UFC opening the doors for everybody,” Hunt added in regards to being a part of this weekend’s debut event in Perth and a pioneer in the sport. “I’ve fallen into many of the holes, but being a pioneer of the sport, that’s sort of the road.

“That’s what happens when you’re one of the pioneers is that you’ve got to fall in these holes to let these guys know. It’s better to learn from others instead of on your own, but like I’ve said, I wouldn’t take back my journey for anything.”

And that’s why despite more than 60 combined fights across nearly 20 years, Hunt still relishes the opportunity to make that walk and will do so again when he hits the cage this weekend.

“Curtis Blaydes is no joke; he’s No. 9 for a reason and I could never look past my next opponent,” he said. “We’ll see what happens on Sunday. I have respect for Curtis. Every fight I go into, I give my all, so for me, it’s going to mean everything.”

Not bad for a 43-year-old guy who wasn’t even supposed to be here.