One Day At A Time For Luis Pena

“If you start looking towards your career and what you think you’re going to do, all that’s going to do is cause you to lose sight of the things in front of you at the time."
By Damon Martin • Mar. 20, 2019

Former Ultimate Fighter competitor Luis Pena has high hopes for his UFC career, but he is taking everything one step at a time.

After an injury put a disappointing end to his time on the reality show, the 25-year old prospect got healthy again and made his Octagon debut last July with a dominant first-round victory over former housemate Richie Smullen.

Competing on The Ultimate Fighter also led Pena to his new team at American Kickboxing Academy, where he continued working with UFC heavyweight champion Daniel Cormier, who was his coach on the show.

Following his debut win, coupled with a team known for producing champions, Pena had a lot of hype surrounding his last fight when he took on Mike Trizano, who actually went on to win The Ultimate Fighter season 27. In many ways, Pena saw the fight as his chance to compete for the crown after he was unable to finish the initial tournament due to injury.

Unfortunately, Pena came up short on the judges’ scorecards as he lost a split decision to Trizano, the first defeat of his professional career.

“I’m not going to lie, I don’t think I fought that great of a fight. I don’t think I had a great performance but, at the same time, re-watching that fight, I don’t necessarily feel like I was beat. I felt like, if anything, I lost the fight, if that makes sense,” Pena explains.

“I remember there in the cage, I told my coaches going to the corner that I could honestly see this being a draw. When they announced his name, I was a little surprised but, at the end of the day, it’s on me for letting it go to the judges’ hands. It’s on me for not finishing.”

It was the first loss of his career, but the setback didn’t put Pena into some kind of funk after he fell short against Trizano.

Instead, Pena just picked himself up, got back in the gym and started preparing for the next battle ahead.

“You can’t dwell on stuff like that," Pena stated. “In this sport, you have to move on."

In the same fashion that Pena didn’t get bogged down by a single defeat, he’s also not looking too far ahead when thinking about his career prospects in the UFC.

“If you start looking towards your career and what you think you’re going to do, all that’s going to do is cause you to lose sight of the things in front of you at the time," Pena said.

“I don’t really think about it. I just try to live life every day, one day at a time."

If Pena has a mantra that he follows, that would probably be the one he would wear as a t-shirt because he carries that same attitude into every facet of his career.

Right now, the two biggest things standing in front of Pena are his move down to featherweight and a challenge from Steven Peterson when they clash on the main card at UFC Fight Night from Nashville.

While there is cause and reaction in all of Pena’s decisions, his loss to Trizano last year really played no part whatsoever in his decision to test the waters in the featherweight division.

He didn’t feel overpowered or undersized, but Pena would enjoy having some of those advantages over his opponents, and that’s why he opted to move down to 145 pounds. 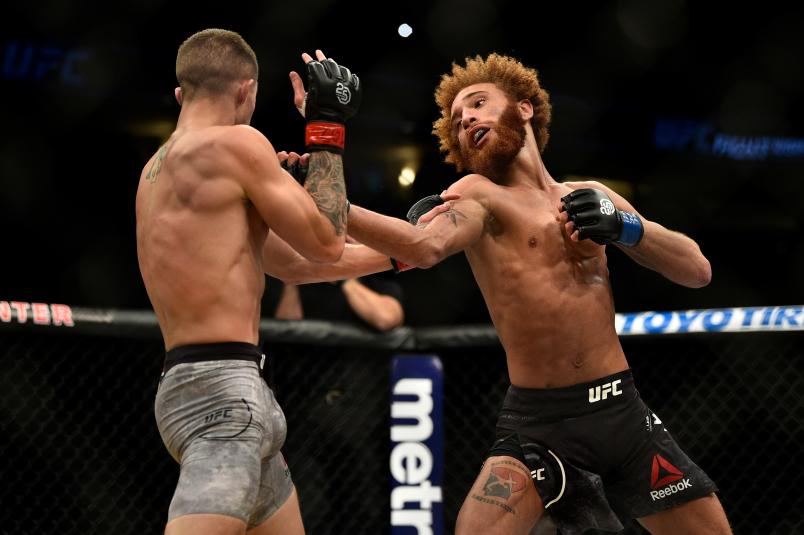 “It’s not hard at all for me to make 155. I don’t really have to watch my diet. I just kind of eat whatever I want and just train hard,” Pena said. “With this camp, I actually had to watch what I was eating and make sure I was getting the right nutrients. I haven’t necessarily enjoyed the choice, but I know it’s going to pay off in the end.

“There’s no messing around. It’s not like when I was at 155 and I could kind of do whatever I wanted.”

While he says he is walking around at a similar weight now as he did when competing at lightweight, Pena revealed that he was actually under the 155-pound limit the night before the weigh-ins for his last fight.

This time around, Pena is watching what he eats for the first time in his career, which is also teaching him to be more disciplined as he prepares for the fight against Peterson.

“I feel mentally stronger. I feel more dialed in. I feel ready to go. I feel ready to fight,” Pena said. I can’t say I’m enjoying the move, because I want to get this weight cut over with and get to the fight.

“I decided to make this move to 145 [pounds] and I think it’s going to pay off in dividends for the rest of my career.”

The first test will be a tough one, as Peterson will come into the fight with four times as much experience, which is exactly what Pena wanted for his initial foray into the featherweight division.

“What a lot of people don’t realize, if you count my fights on the show, Mike was my fifth undefeated opponent in a row. I felt like I’ve been catching myself against some really good guys at that level and I’m ready to jump up to that experience level with Steven Peterson,” Pena said.

“He likes to come forward. He’s the kind of guy that’s right up my alley. The kind of guy that I need to not only bounce back from the loss but make a statement against him. We’re going to get right in each other’s faces and throw down. I think this is going to be a great fight for the fans and a great fight for my career in general. No matter what, I think bonus money is in the picture for me in this fight.”

Pena only had four fights prior to joining The Ultimate Fighter, which means in many ways he’s growing up in the UFC with his third fight in less than a year.

That may seem like a daunting task for some, but Pena embraces the opportunity — and just like everything else in his career, he’s only worried about what is directly in front of him.

“It’s a challenge I never knew I was going to have to deal with, but very few get to say that they have that challenge,” Pena said. “You have to grow up and you have to mature in front of everybody’s eyes on the biggest stage imaginable in the UFC.

“But the way I live my life, I just look at it one day at a time. I don’t try to let the gravity of this [situation] get away from me.”