The One and Only Donald Cerrone 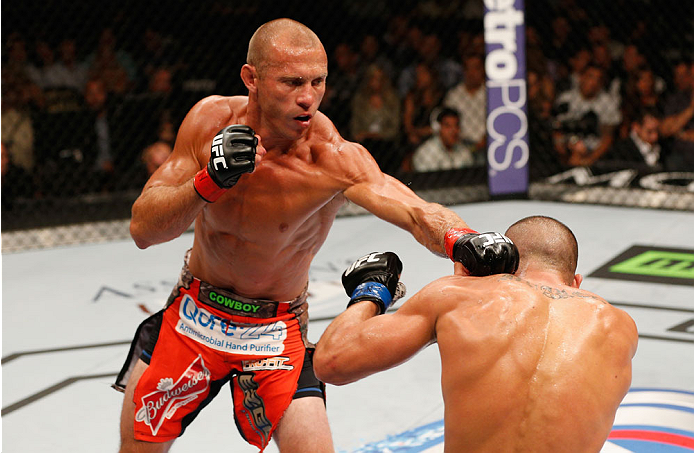 There’s only one Donald Cerrone.

The hard-charging lightweight wrecking machine is a force of nature in the ranks of the 155-pound fold, with his fighting style the definition of fan friendly. From the opening bell, the scrappy Colorado native is coming to put his opposition in the proverbial dirt, and he’ll use any combination of punches, kicks, chokes or knees to make that happen.

And unfortunately for the majority of competitors who draw his name, “Cowboy” is quite successful at following through on his intentions.

Furthermore, the 31-year-old Jackson/Winkeljohn-trained fighter is one of the most prolific fighters in the game. In his three years competing under the UFC banner, Cerrone has notched 15 showings, with all but three of those outings resulting in his hand being raised. Couple that level of production with his willingness to sling leather with anyone at any time or place, and you have the closest thing there is to a guarantee in the fight business.

UFC President Dana White has said he’d take a roster of Donald Cerrones if he could, and the organization’s frontman has been frequently quoted in regard to the frequency he has to tell Cerrone that he can’t fight every month, because if it were up to the Colorado native himself, his name would be on at least one card every four-week cycle. In an era where misfortune lurks around every corner and fighter injury can put an entire card in jeopardy, Cerrone has become a name fight fans and the UFC itself can bank on.

“Who you telling?” Cerrone laughed at the suggestion of competing every 30 days. “Put me on a card once a month and let’s go. I don’t even need the Pay-Per-View points. I’ll do it without them. I don’t care. I just want to fight and once a month sounds good to me.”

He’s never pulled out of a scheduled bout, and considering his affinity for adrenaline jacking outlets (wakeboarding, rock climbing, etc.) that’s downright amazing. Cerrone simply loves to fight, but even more so than “throwing the f**k down” (his words), the lightweight ruckus bringer loves to get paid. More fights equal more money, and when you do it the way Cerrone does, there is usually an additional set of bonus checks with his name on it.

Therefore, fight nights present a bevy of opportunity for the rangy striker, and he’s eager to capitalize on every bit of it. Cerrone is looking to keep his momentum rolling in 2015 and get everything he can - every fight he can - in the 12 months to come.

“I’m excited about this year,” Cerrone said. “I want to run the table just like I did last year and keep kicking ass. Looking back at the year I had, it was a great accomplishment. I won some great fights and beat some tough guys, but that’s what I’m here for. I’m here to fight and put on some entertaining shows. And I’m going to keep doing it. I’m going in there to put guys away. That’s what I’m there to do.”

The first opportunity of the New Year will come when he steps in against undefeated prospect Myles Jury in the co-main event of UFC 182 this Saturday. The surging young talent has been battling his way up the talent-rich lightweight ladder and has found success in all six of his showings under the UFC banner. His recent first-round TKO victory over former PRIDE champion and legendary Japanese lightweight Takanori Gomi back in September was the biggest of his career, and it guaranteed he would draw one of the division’s best in his next outing.

The following month, news surfaced that he would be facing Cerrone for his next challenge, but then word of that matchup suddenly fell by the wayside. The Alliance MMA representative then took to his Twitter account to court the public’s opinion as to whom he should face next, and that’s when Cerrone mashed the blast button.

The savvy veteran was confused by Jury’s move and decided to sort out the situation in the realm of social media. Apparently the contract that was in place had suddenly disappeared and now the San Diego native was looking for an opponent. None of this made sense to Cerrone, so he decided to go right to the source.

“I don’t know what happened,” Cerrone said. “We were set to fight then all of a sudden we weren’t. Then he goes on Twitter and starts asking the public who he should fight next and I was like, ‘Hey man you just f**king turned me down. How are you gonna get on here and ask people who you should fight?’ I know it is all just to get a rise out of social media, but if you want to fight me, it’s super easy. You just call Dana and tell him and it’s done. I don’t understand why people get on Twitter with this stuff because Twitter had nothing to do with it. I don’t get it.”

When Cerrone says he’s not hard to find if a fight is what you want, he means it. Other fighters have been known to pick at him over the social media platform and he always does his best to make it easy for them. He simply posts his home address and dares all comers to jump.

“If someone wants it that bad they can show up at the house for sure,” he said. “We can do it right there any time.”

As for the fight that is directly in front of him, Cerrone is as ready as he’s ever been. He’s on a five-fight winning streak where he’s folded and battered some of the best lightweights in the world. Furthermore, he’s looked more impressive each and every time he’s done it. He made beating a notoriously hard-nosed fighter like Jim Miller look relatively easy, then overcame a rough first round to rebound and dominate Eddie Alvarez, who had long been regarded as one the world’s best at 155 pounds.

With each victory he’s moving closer to getting his long-awaited shot at the lightweight strap and he just doesn’t believe Jury is going to have what it takes to stop his freight train from continuing to rock n’ roll down the tracks.

“Jury does everything pretty well but there isn’t anything he does great,” Cerrone said in conclusion. “Unfortunately for him, ‘well’ isn’t good enough to beat great and that’s all I have to say about that.”