On This Day in UFC History – Ultimate Japan 3

Look back at this day in history we celebrate the 20-year anniversary of UFC 25: Ultimate Japan 3
By Thomas Gerbasi, on Twitter: @TGerbasi • Apr. 14, 2020

Times were different in the MMA world back in 2000. The UFC was in trouble financially, Japan’s PRIDE organization was rising in profile, but through all this turmoil, a host of young talents were starting to make their mark. That was never clearer than on the UFC 25 card that took place on April 14, 2000 in Tokyo.

With just six fights on the card, Ultimate Japan 3 was a far cry from the 12 to 13-fight cards fans are used to today, but on display were two rising stars from Japan (Ikuhisa Minowa and Sanae Kikuta), a future UFC middleweight champion (Murilo Bustamante), and a main event featuring two fighters who would become icons of the sport in Tito Ortiz and Wanderlei Silva.

Twenty years later, I give you UFC 25: Ultimate Japan 3.

After the stunning retirement of Frank Shamrock after UFC 22 in September of 1999, a vacancy was left atop the middleweight division. Top contenders Tito Ortiz and Wanderlei Silva stepped in to fill that void in the main event of UFC 25 in Tokyo, and when it was all over, “The Huntington Beach Bad Boy” was crowned champion via five-round unanimous decision.

“I worked very hard for this, to make this belt happen,” said the 25-year-old Ortiz.

The two aggressive battlers circled each other warily to start the bout, with Silva’s first offensive push getting met by an Ortiz takedown. Ortiz controlled matters from the top for the remainder of the round, landing short shots that didn’t cause any significant damage, but that did score points.

Silva came out fast for the second frame, but a flurry from the Brazilian left him open for an Ortiz right hand that dropped him to the canvas. Silva cleared his head quickly, but soon he was on his back again, eating shots from Ortiz. The pattern continued for the remainder of the stanza, putting Ortiz up 2-0.

Looking winded, Silva needed to turn things around, but he apparently didn’t have the energy to do so. Ortiz didn’t push the pace either, with a failed takedown attempt the only significant action until until nearly two minutes in, when an exchange saw Silva finally rock his foe. Ortiz literally ran to clear his head, but after a few tight moments, he was able to get the bout back to the mat, where he again controlled the battle with positioning and ground strikes. 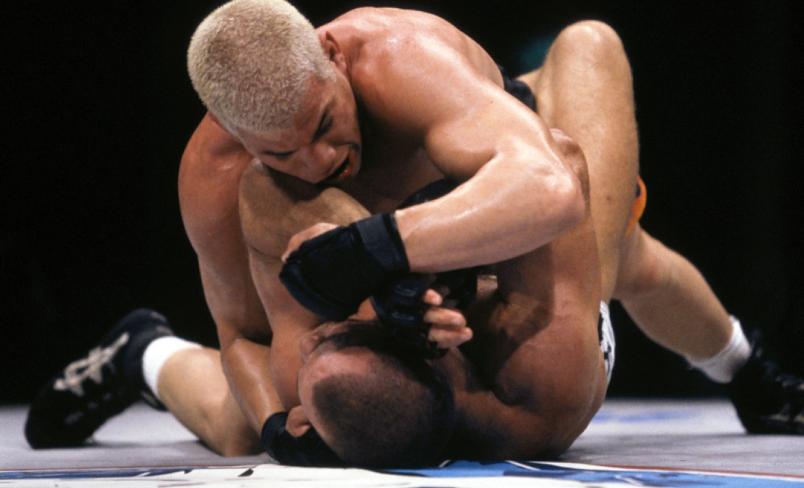 After a two-minute cat and mouse game, Ortiz took the bout back to the canvas, and it was clear that the key to victory for him was keeping Silva on his back. And he did just that through the rest of the fight, with the Brazilian having no escape route from the smothering attack, making the unanimous decision for Ortiz a mere formality.

Highly touted Brazilian middleweight Murilo Bustamante was successful in his UFC debut, as he followed up a late first round surge with a quick second round takedown and submission of Yoji Anjo via arm triangle at the 31 second mark.

Promising UFC rookie Sanae Kikuta was impressive in his middleweight bout against hard-hitting Eugene Jackson, using a steady diet of ground strikes to set up an arm triangle and then an armbar, with the armbar forcing a tap out at 4:39 of the first round.

Heavyweights Ron Waterman and Satoshi Honma battled it out for 15 minutes, with Waterman, “The H2O Man,” earning a three round unanimous decision victory.

Also going the distance were lightweights Laverne Clark and Koji Oishi, with Clark pulling out the majority decision victory.

Ikuhisa Minowa and Joe Slick engaged in a middleweight battle packed with solid ground work from both men and a number of guillotine attempts from Slick, but in the third round, a right kick to the head by Minowa cut Slick’s forehead open, forcing a stoppage at the 1:54 mark. Octagonside commentator Mike Goldberg called it the second-best kick he had ever seen in the UFC, bested only by Pete Williams’ head kick knockout of Mark Coleman at UFC 17.