On This Day in UFC History: UFC 47

On this day 16 years ago, a historic rivalry began at UFC 47 in Las Vegas between Chuck Liddell and Tito Ortiz.
By Thomas Gerbasi, on Twitter: @TGerbasi • Apr. 2, 2020

Think of the biggest and most highly anticipated fights in UFC history over the last several years, but first rewind the clock to April 2, 2004 and the UFC 47 meeting between Tito Ortiz and Chuck Liddell. THAT was the fight everyone wanted to see, and it had all the elements of a legendary rivalry: bad blood, a former friendship, and two fighters on top of their game. It’s hard to believe that it was 16 years ago, but it was, and today, we look back at how we called UFC 47: It’s On!

It was the grudge match to end all grudge matches, and a packed house at the Mandalay Bay Events Center saw Chuck Liddell and Tito Ortiz finally get it on in the main event of UFC 47.

Yet after only five minutes and 38 seconds, it was “The Iceman” who was left standing, as he emphatically stopped the former light heavyweight champion in the second round.

The action didn’t stray to the ground once during the match, with two Ortiz takedown attempts easily foiled by Liddell.  But even though Liddell was in his element while standing, he was unable to penetrate Ortiz’ tight defense for much of the opening round, as both men tentatively pawed at each other, not wanting to make a fatal mistake.

Late in the first, Liddell finally landed one of his patented bombs, exploding a right hand on Ortiz’ jaw that staggered him.  ‘The Iceman’ followed with a kick to the head, and Ortiz’ legs were rubbery at the bell, even as he jawed defiantly at Liddell.

Capitalizing on his good fortune, Liddell moved right in on Ortiz as the second round commenced, and once he landed a 1-2 combination to the jaw of ‘The Huntington Beach Bad Boy’ the end was just moments away.

Pinned to the cage by Liddell’s furious barrages, Ortiz blocked most of the punches, but then got drilled with a right to the jaw followed by a quick left that bloodied his face and put him down on the mat, forcing referee John McCarthy to halt the bout just 38 seconds into round two. 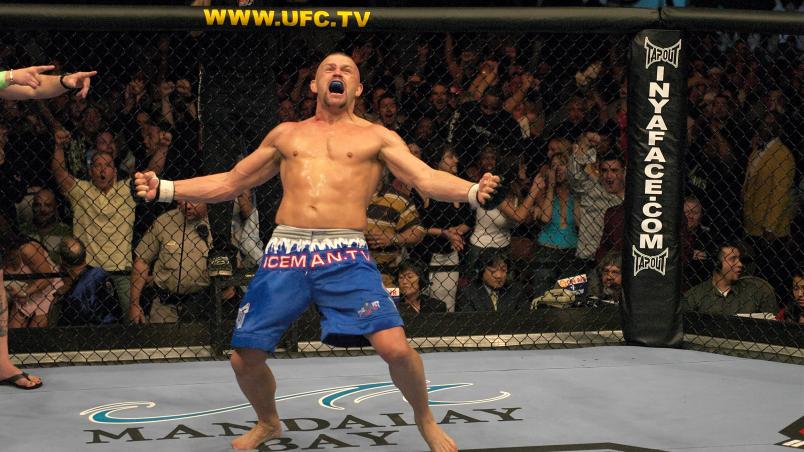 Scheduled to face Tim Sylvia for the vacant heavyweight crown, Andrei Arlovski instead took on Wesley “Cabbage” Correira in a non-title fight when it was revealed that Sylvia still had trace amount of steroids left in his body from previous use (use that had gotten him stripped of the title in the first place), thus making him ineligible to compete.

Undeterred, Arlovski calmly re-established his credentials as he scored a one-sided stoppage over Correira, who was game, but simply outgunned by the Belarusan, who drilled him with a various assortment of punches, knees, and kicks throughout the 6:15 of action.

If you had told someone that the welterweight bout between young guns Robbie Lawler and Nick Diaz ended in a knockout, you wouldn’t expect that the man with his hand raised would be Diaz.  But in a shocker, the Cesar Gracie jiu-jitsu ace disregarded his ground game completely, knocking out the knockout artist at 1:31 of the second round.

It’s had become commonplace for the bizarre to kick into high gear when 6-10 heavyweight Wes Sims was in The Octagon, and his UFC 47 bout with Octagon newcomer Mike Kyle was no exception.  Taking the bout on one day’s notice, Sims had some early success on the mat with a couple of submission attempts, but soon Kyle’s ground and pound weakened the Ohio native, and after a standup by referee John McCarthy, Sims was spent.  Initially turning his back on his foe, Sims turned around in enough time to be grabbed in a clinch, where Kyle landed some flush knees before landing a brutal right hand that sent “The Project” down and out at the 4:59 mark.  Almost immediately, Sims was back on his feet – complaining of an alleged bite by Kyle, allegations the Californian dismissed as sour grapes.

Welterweight Chris Lytle followed up his spirited performance against Robbie Lawler at UFC 45 with an impressive two round victory over Tiki Ghosn.

Eccentric lightweight contender Genki Sudo returned to the UFC for the first time since a decision loss to Duane Ludwig at UFC 42, and scored a submission victory over debuting Mike Brown.

In an evenly matched lightweight bout, Yves Edwards eked out a three round split decision over Hermes Franca.

In a battle of debuting heavyweights, Jonathan Wiezorek survived some shaky moments en route to a first-round stoppage win over Wade Shipp.