On This Day in UFC History: Serra Shocks the World

Look back 13 years ago to a historic moment in UFC history, when Matt Serra upset UFC legend Georges St-Pierre
By Thomas Gerbasi, on Twitter: @TGerbasi • Apr. 7, 2020

Odds mean nothing.  The past means nothing.  In mixed martial arts, what matters is what happens when the bell rings.  And when the bell rang at the Toyota Center for UFC 69, Matt Serra came to fight.  When you do that, good things can happen, and they did for the Long Island native, who stunned the world with a first round TKO win over Georges St-Pierre to win the UFC Welterweight Championship.

Serra had earned his title shot by winning season four of The Ultimate Fighter reality show.  St-Pierre, in his first fight since taking the 170-pound title from Matt Hughes last November, was expected to roll over his challenger en route to bigger and better things.

It was not to be.

A smiling and relaxed Serra showed no fear of the champion as he met him in the middle of the Octagon to start the bout, but St-Pierre was sharp as he shot out kicks and the occasional quick flurry.  The challenger responded with kicks of his own to the champion’s legs, but St-Pierre appeared to be too fast for his foe, apparently just biding his time until he decided to pounce.

But that’s why they fight the fights, and just as soon as those words were written, Serra threw a looping right hand that grazed the back of St-Pierre’s head, forcing him to lose his balance and stumble twice.  It was all the underrated Serra needed, as he swung for the fences and landed on the still recovering champion, who got into deeper and deeper trouble with each shot the New Yorker landed.

Suddenly, St-Pierre was on the mat, and Serra followed him, never letting his hands stop moving until referee John McCarthy pulled him off at the 3:25 mark and declared him the new welterweight champion of the world.

“Tonight I got beat by a better fighter than myself,” said a gracious St-Pierre.  “He beat me fair and square.  I’m very sad right now, but I will come back.” 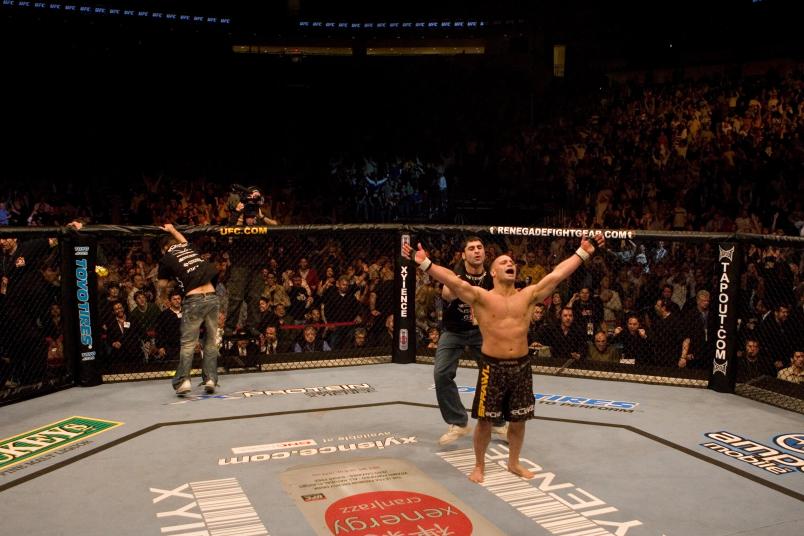 After the war of words between Josh Koscheck and Diego Sanchez, nothing less than an all-out shootout was expected between the two welterweight standouts.  Unfortunately for Sanchez, the best shot he landed on Koscheck was the two-handed shove he delivered during Friday’s weigh-in, as he was unable to mount any offense whatsoever during the real fight en route to a shutout decision loss in a bout that didn’t deliver on the hype, but that did allow Koscheck to gain revenge on the man who beat him during the first season of ‘The Ultimate Fighter’ while also handing the ‘Nightmare’ his first professional defeat.
WATCH ON UFC FIGHT PASS

In stark contrast to Koscheck-Sanchez, Roger Huerta and Leonard Garcia put it all on the line in their lightweight swing bout, and though Huerta emerged with the decision win, there were no losers in one of the best 155-pound battles of recent years.

There was simply no feeling out process between the two Texans, as they came out in a fast and furious fashion as soon as they were waved out of their corners and barely let up for the next 15 minutes, drawing thunderous roars from the crown throughout.

Scores were 30-27 for Huerta.
WATCH ON UFC FIGHT PASS

The rise of Mike Swick up the middleweight ranks hit a snag, as he was clearly outpointed by Yushi Okami in a hotly contested three rounder. Scores for Okami were 29-28 twice and 30-27.
WATCH ON UFC FIGHT PASS 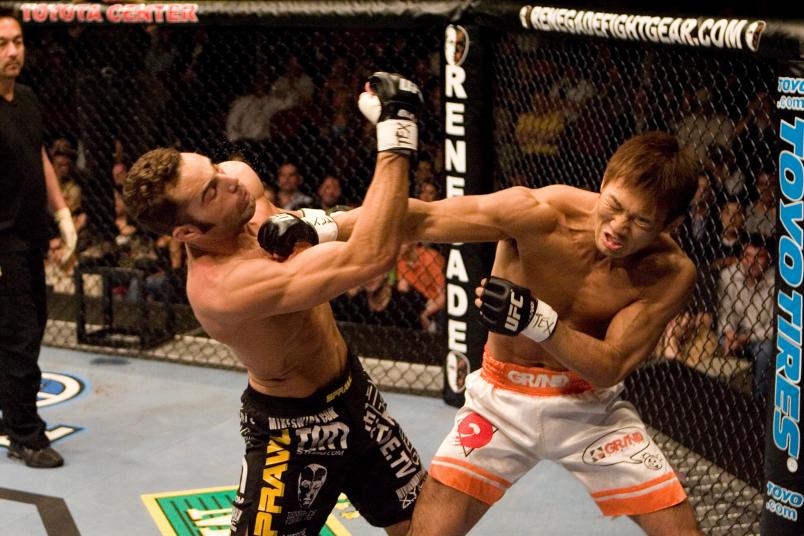 TUF3 winner Kendall Grove continued to impress in his UFC campaign as he submitted fellow prospect Alan Belcher in the second round of a heated middleweight battle.
WATCH ON UFC FIGHT PASS

New Yorker Luke Cummo got the night off to a rousing start with a second-round stoppage of Josh Haynes in a welterweight bout.
WATCH ON UFC FIGHT PASS