On This Day in UFC History – Florian vs. Gomi

Relive this historic day in UFC history, which featured a main event clash between Kenny Florian and Takanori Gomi.
By Thomas Gerbasi, on Twitter: @TGerbasi • Mar. 31, 2020

In 2007, the migration of stars from Japan’s PRIDE organization to the UFC was well underway, allowing fans to see fighters like “Minotauro” Nogueira, Mauricio “Shogun” Rua, Wanderlei Silva, and Mirko Cro Cop in the Octagon on a consistent basis. Yet there was one name missing in that first wave, and it was Takanori Gomi.

But, finally, on March 31, 2010, “The Fireball Kid” made his way to the UFC to face Kenny Florian. One of the top contenders at 155 pounds, Florian had lost a 2009 title fight to BJ Penn, but a submission of Clay Guida at UFC 107 got “KenFlo” back on track, and a win over Gomi would keep him moving toward a second crack at the crown. But would he get it against one of Japan’s finest fighting exports? Let’s look back at how we called it that night in Charlotte, North Carolina.

For two rounds Kenny Florian looked like a southpaw Larry Holmes as he peppered former PRIDE star Takanori Gomi with jab after jab. But in the third, the lightweight contender took the fight to the mat and finished it there, spoiling Gomi’s long-awaited UFC debut via submission.

The two southpaws circled each other warily as the fight opened, with early strikes from both men coming up short. In the second minute, Florian began landing his punches and getting Gomi’s attention, and the New Englander’s tight defense deflected any return fire. As the round progressed, Florian’s jab began landing with increasing frequency, and the sporadic kick thrown in was scoring as well, capping off a dominant first five minutes.

Florian continued to pepper Gomi with jabs in the second round, with the Japanese star’s lack of head movement making him an easy target. For his part, Gomi tried opening up more frequently in an effort to force Florian into a firefight, but his successes were few and far between, and his frustration was evident as he missed with a wide haymaker in the final minute.

With two rounds apparently in the bank, Florian looked for a takedown to start the final frame, but was stopped in his tracks by Gomi. A minute in, Gomi landed with a solid combination, but was met with a successful takedown moments later for his trouble. Soon, Florian got the mount, and when Gomi gave up his back, Florian sunk in a rear naked choke that produced a tap out at the 2:52 mark of the third round. 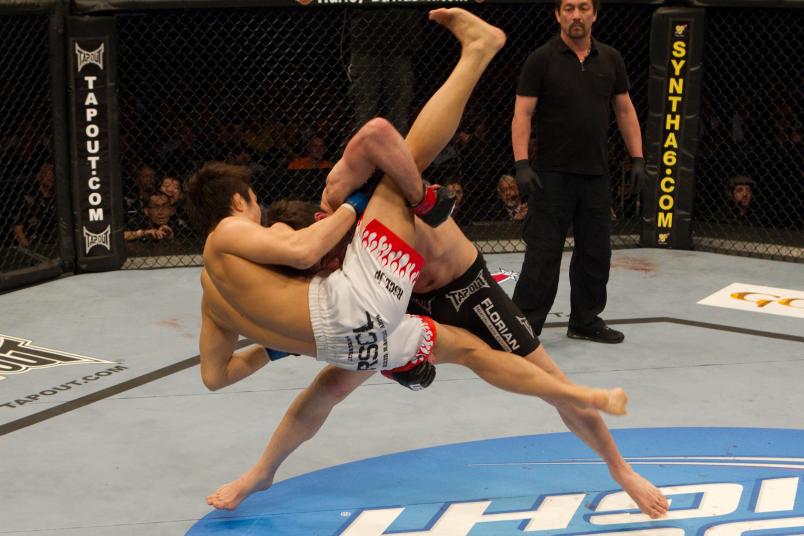 The Ultimate Fighter season ten winner Roy Nelson quickly cut down Stefan “Skyscraper” Struve in the first round of their heavyweight bout.

After a power outage in the arena stalled the opening of the bout, Nelson and Struve went right to work when the lights came back on, with Nelson aggressively closing the distance. Once in range, Nelson struck, dropping his foe with a right hand. Struve was unable to recover, with a follow-up barrage of strikes bringing in referee Dan Miragliotta to halt the bout at the 39 second mark.

Japanese middleweight contender Yushin Okami put together one of his most impressive UFC performances to date at the Bojangles Coliseum, as he halted Lucio Linhares in the second round after a clinic of precision striking.

British lightweight Andre Winner made it two in a row, following up his knockout victory over Rolando Delgado with a three round unanimous decision win over Rafaello Oliveira. 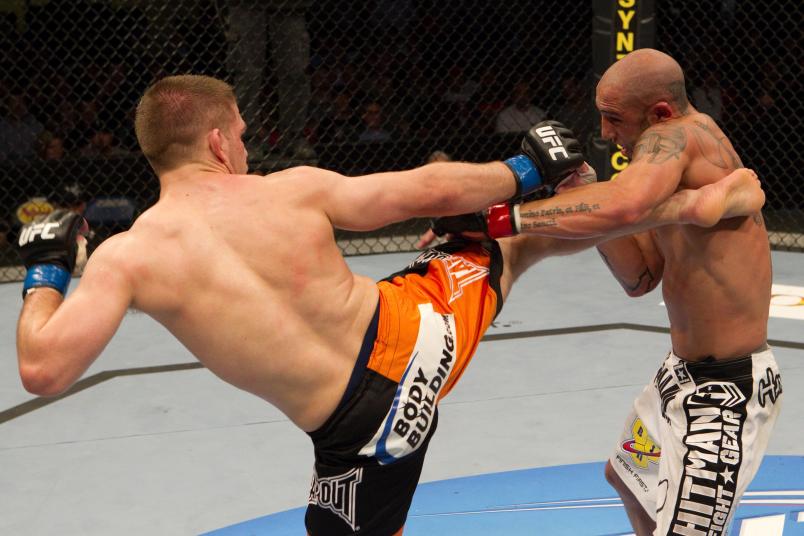 Nik Lentz got stronger as his fight with Rob Emerson went on, and he eventually pounded out a three round unanimous decision victory to move to 2-0-1 in the UFC.

Brazilian Jiu-Jitsu black belt Gleison Tibau promised a knockout in his lightweight bout against Caol Uno and he delivered, finishing off the Japanese star late in the first round.

Gerald Harris made it two knockouts in two UFC tries, as he halted previously unbeaten debutant Mario Miranda in the first round of a back and forth middleweight scrap.

In a clash of debuting welterweights, Charlie Brenneman got his first Octagon victory, outpointing Jason High unanimously over three rounds.