UFC Shenzhen has the potential to be the coming out party for several fighters, including these three athletes. Here’s a closer look at this week’s talented trio of up-and-comers.
By E. Spencer Kyte • Aug. 26, 2019

Following a one week break to let the fallout from UFC 241 settle, the UFC is back to close out its torrid summer schedule with the organization’s first trip to Shenzhen, China.

Headlined by women’s strawweight champion Jessica Andrade defending her title against surging Chinese contender Zhang Weili, this weekend’s card also features Brazilian welterweight Elizeu Zaleski dos Santos putting his seven-fight winning streak on the line against the consistently improving Li Jingliang and a handful of matchups that will provide further clarity about where a few promising hopefuls sit within their respective divisions.

As is often the case with these international events, Saturday’s event at Shenzhen Universade Sports Centre Arena represents an opportunity to get a closer look at a collection of relative newcomers looking to make an imprint on the UFC audience as the 2019 calendar hits the home stretch. From a promising featherweight eager to follow up his strong debut in his sophomore appearance to a pair of debuting competitors looking to make their first forays into the Octagon memorable for all the right reasons, this card has the potential to be the coming out party for several fighters, including these three athletes.

Here’s a closer look at this week’s talented trio of up-and-comers.

This is the Shenzhen edition of On the Rise.

The 25-year-old featherweight made his promotional debut in April, earning a unanimous decision win over SeungWoo Choi in St. Petersburg that pushed his record to 11-0. While not the type of explosive debut that gets everyone talking following the event, Evloev’s performance made it clear that the buzz surrounding the former M-1 Challenge standout is real and that he was definitely someone to track in the loaded 145-pound ranks going forward.

Originally slated to face Mike Grundy in what would have been their joint sophomore outings, the Team Kaobon representative was forced out with an injury, leaving Evloev to square off with a familiar name from his past instead, as he welcomes Lv Zhenhong to the Octagon on Saturday night.

The two fought a little over four years ago in what was Evloev’s second professional fight, with the Russian winning a unanimous decision. That loss came in the midst of a rough patch for Lv, who lost two of his next three fights, but has since rattled off 11 victories in his last dozen starts.

Featherweight is brimming with talent, and being stationed on overseas cards always makes it a little more difficult for emerging fighters to make major impact, but Evloev has the skill set to become one of the top prospects in the division and set himself up to make a push towards the rankings next year.

This kid is the goods and you’re going to want to pay attention to him, starting this weekend. 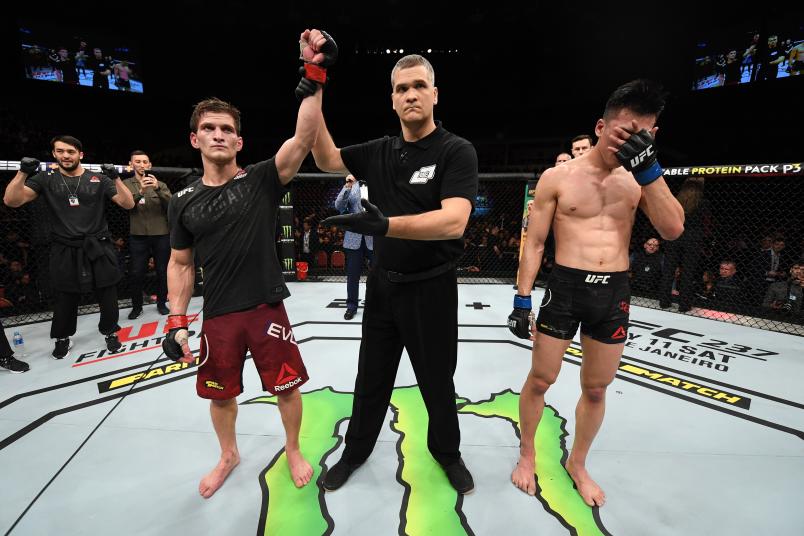 One of the top talents competing outside the Octagon for the last several years, this weekend marks Mizuki’s UFC debut as the former Invicta FC and Deep Jewels star steps up on short notice to take on Wu Yanan in Shenzhen.

The older sister of former UFC flyweight Naoki Inoue, Mizuki first started garnering acclaim five years ago at the tender age of 20, when she defeated Bec Rawlings in her Invicta FC debut. Since then, she has faced a steady string of top competition while solidifying her standing as one of the top talents in the division. She’s won five of her last six bouts with her only setback coming by split decision in a short notice championship fight against Virna Jandiroba.

She followed that up by collecting a unanimous decision win over former UFC fighter Viviane Pereira and now moves up to flyweight for this weekend’s short-notice bout.

Filling in for Luana Carolina, Saturday’s bout with Wu is a tremendous opportunity to showcase her skills and hit the ground running in the UFC. Wu is fresh off a first-round submission win over the previously unbeaten Lauren Mueller in her last outing, so if Mizuki can stroll in and score a victory on short notice in her promotional debut, it will validate the long-standing belief in her potential.

The latest fighter from South Korea to land a place on the UFC roster, Park’s career started in rather nondescript fashion. Over his first six fights, the 28-year-old was a .500 fighter, but since then, the Korean Top Team representative is unbeaten.

Park arrives in Shenzhen on a seven-fight winning streak that includes a submission win over PFL standout Ray Cooper III and with an opportunity to make an immediate impression as he squares off with former LFA middleweight champ Anthony “Fluffy” Hernandez. A little over three years since his last loss, Park has shown a diverse skill set during the course of his winning streak, earning three stoppages each by submission and strikes, while going the distance once as well.

Hernandez had a ton of hype coming into his blistering performance on the Contender Series last summer, but stumbled out of the gate in his UFC debut earlier this year. That said, the Californian has faced more established competition to this point in their careers and still represents a step up for Park, so if he can maintain his winning ways this weekend, the South Korean middleweight will put himself on the short list of fighters to watch in the 185-pound weight class heading into next year.