Find out which fighters are trending upward as we get closer to UFC 257: Poirier vs McGregor 2
By E. Spencer Kyte, on Twitter @SpencerKyte • Jan. 19, 2021

The first pay-per-view event of the year brings a stacked lineup capped by a lightweight rematch between Dustin Poirier and Conor McGregor to the brand-new Etihad Arena on Fight Island this weekend.

While the pivotal main event pairing is rightfully garnering a ton of attention, Saturday’s fight card is flush with highly competitive and consequential bouts across a number of divisions and features a number of promising emerging talents getting an early start on their 2021 campaigns, including strawweight standout Amanda Ribas, flyweight upstart Amir Albazi, and OTR favorite Movsar Evloev, who takes on Nik Lentz in a pivotal preliminary card matchup.

But there are three lightweight competitors looking to work their way up the ranks that should really be on your radar as Saturday draws nearer.

After a 10-year run as one of the best fighters competing outside of the Octagon, the 34-year-old Chandler is set to step into the UFC cage for the first time this weekend in a co-main event clash with Dan Hooker.

Chandler enjoyed three different reigns atop Bellator’s 155-pound weight class and boasts a 21-5 record that includes victories over former UFC lightweight champs Benson Henderson and Eddie Alvarez, as well as Marcin Held, Patricky Pitbull, and many others. The compact powerhouse from Missouri has won five of his last six heading into his promotional debut this weekend and has a chance to instantly insert himself in the title conversation if he’s able to post a victory over Hooker in Saturday’s penultimate matchup.

Training out of Sanford MMA, Chandler has spent countless hours competing in the gym alongside a number of elite UFC talents, including welterweight champ Kamaru Usman and impending title challenger Gilbert Burns, and has all the requisite skills and attributes needed to be an instant threat in his new environment.

Hooker has gone 7-2 since returning to the lightweight ranks and took part in two of the best five fights of 2020, beating Paul Felder by split decision in February before dropping a unanimous decision to Saturday’s headliner Poirier at the end of June. He’s established himself as a legitimate contender and is a perfect, dangerous dance partner for Chandler in his promotional debut.

Should Chandler earn a victory on Saturday night, he’ll thrust himself into the thick of the chase in the loaded lightweight division. With the title situation uncertain at the moment, a statement win over an established guy like Hooker would be a great way for Chandler to introduce himself to the UFC audience and make his case for being on the short list of title contenders heading into the second quarter of 2021. 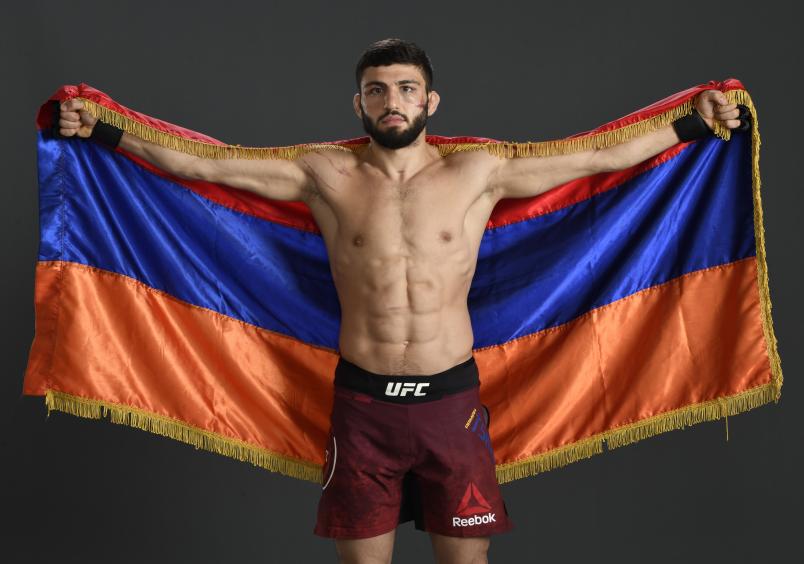 Arman Tsarukyan of Armenia poses for a portrait after his victory during the UFC Fight Night event inside Flash Forum on UFC Fight Island on July 19, 2020 in Yas Island, Abu Dhabi, United Arab Emirates. (Photo by Mike Roach/Zuffa LLC)

Tsarukyan made a splash in his promotional debut in April 2019, pushing Islam Makhachev to his limits in a losing effort.

While that performance put the 25-year-old on the map with a lot of UFC fans and observers, the depth of talent in the lightweight division and constant ascent of another impressive young fighter seemingly every weekend has pushed Tsarukyan to the periphery, despite that fact that enters his matchup with fellow emerging talent Nasrat Haqparast on a two-fight winning streak.

After out-hustling Olivier Aubin-Mercier to earn his first UFC win, Tsarukyan returned just under a year later to control the action against Davi Ramos last summer on Fight Island, frustrating the Brazilian submission specialist with his top control and a superior all-around skill set. Now 15-2 overall, Tsarukyan will look to establish himself as the top “25 & Under” lightweight in the UFC ranks with a win this weekend.

Find Out How To Watch UFC 257: Poirier vs McGregor

Haqparast lost some of the shine he carried into last year with his first-round stoppage loss to Drew Dober last January but he rebounded with a good win over Alex Munoz in the summer and remains a promising up-and-comer, much like Tsarukyan.

Between his strong showing against the 13th-ranked Makhachev and his tandem quality wins over OAM and Ramos, Tsarukyan has already proven himself to be someone to watch in the 155-pound weight class. With a victory on Saturday, he’ll take another step toward cracking the Top 15 and likely secure himself a solid step up in competition next time out.

When you earn two first-round stoppage wins in just over five minutes combined to begin your UFC career, you have my attention.

When those victories push your record to 13-0, you should have everyone’s attention, and Azaitar will look to extend his unbeaten run this weekend when he takes on Matt Frevola in one of four lightweight contests to hit the Octagon on Saturday in Abu Dhabi.

“The Bulldozer” dropped Teemu Packalen with an overhand right just three-and-a-half minutes into his debut at UFC 242, prompting keen observers to take note of his exploits and await his sophomore appearance in the UFC cage. That came 371 days later in Las Vegas against Khama Worthy, where he felled the veteran lightweight in 93 seconds to extend his winning streak to a baker’s dozen.

The type of power he brandishes cannot be taken lightly and makes him an intriguing addition to the loaded lightweight clash, and Saturday’s bout with Frevola should help clarify where Azaitar fits in the division at the moment.

“The Steamrolla” has gone 2-0-1 in his last three outings, battling Lando Vannata to a competitive draw before grinding out decision wins over Jalin Turner and Luis Pena. The New Yorker is gritty, seasoned, and tougher than a three-dollar steak, so a win for Azaitar would carry a great deal of weight going forward.