Fighters On the Rise: UFC 250 Edition

Preview three fighters that are on the rise ahead of their upcoming bouts at UFC 250, featuring Sean O'Malley, Alonzo Menifield and Chase Hooper
By E. Spencer Kyte, on Twitter @SpencerKyte • Jun. 1, 2020

The UFC returns to pay-per-view this weekend with another event flush with crucial, competitive matchups and capped by a women’s featherweight title bout between reigning champ Amanda Nunes and challenger Felicia Spencer.

Saturday’s main event marks Nunes’ first opportunity to defend the title she won at UFC 232 and a victory would make her just the first two-division world champion to successfully defend each title while in possession of two belts. Both Daniel Cormier and the recently retired Henry Cejudo have won and defended titles in two different weight classes, but neither man returned to the lighter weight class they ruled after claiming UFC gold up a division.

After winning the belt in thrilling fashion at the end of 2018 with a first-round stoppage win over Cris Cyborg, “The Lioness” returned to the bantamweight ranks for a pair of successful title defenses against Holly Holm and Germaine de Randamie. Now, the Canadian submission specialist Spencer looks to keep Nunes from etching her name in the UFC record books one more time.

Though Nunes’ attempt to make history and further cement her standing as the greatest female fighter of all-time is the biggest story of Saturday’s show, the remainder of the card is laced with key divisional matchups and a host of up-and-coming talents looking to use this weekend as an opportunity to take another step forward in their own pursuit of championship gold and MMA immortality.

“Sugar” returned to action for the first time in two years (and four days) at the start of March and showed no signs of rust, delivering the best performance of his young career by dispatching Jose Quinonez in two minutes at UFC 248. Now, the undefeated bantamweight prospect is taking another step up the competitive ladder and squaring off with veteran Eddie Wineland on Saturday.

O’Malley has all the markings of a future star and championship-level talent, displaying slick, powerful striking, solid scrambling ability, personality and charisma for days, and a championship mindset. It speaks volumes about O’Malley’s character and focus that the now 25-year-old breakout star from Season 1 of the Contender Series came back with a vengeance and was quick to downplay his achievements, even while most in the MMA community were singing his praises and forecasting greatness.

The Montana native and MMA Lab product is now 11-0 overall, and although the depth in the bantamweight division is greater than it has ever been before, it’s going to be difficult to deny O’Malley a place in the Top 15 if he continues to post dominant performances every time he graces the Octagon.

Wineland is the definition of a divisional stalwart — the inaugural WEC bantamweight champion has spent his entire 18-year, 38-fight career competing in the 135-pound weight class and has faced a who’s who of top names during that time. Last time out, the Indiana native snapped a two-fight slide with a second-round stoppage win over Gregory Popov, and this time out, he’ll look to halt O’Malley’s undefeated ascent up the divisional ladder.

If “The Sugar Show” continues to roll on and earn raves reviews, its leading man will continue to validate the hype surrounding him and just might position himself for a date with a ranked opponent next time out. 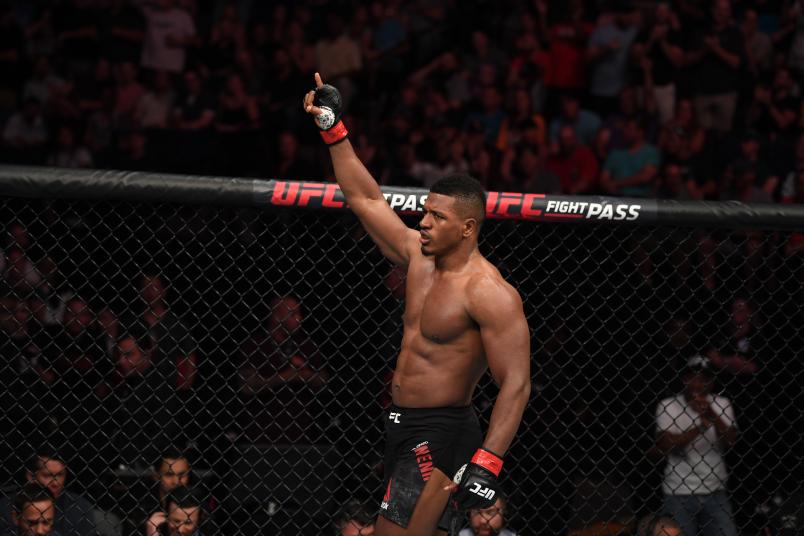 Menifield is another UFC 250 combatant whose first introduction to the UFC audience came during Season 1 of the Contender Series, but unlike O’Malley, the unbeaten light heavyweight needed a second appearance in Las Vegas in order to secure a contract.

After beating veteran Daniel Jolly by doctor’s stoppage in his first appearance on the summer talent search, Menifield went out and won two more bouts on the regional circuit, returned to the series, and smashed Dashawn Boatwright in eight seconds, earning himself an opportunity to compete inside the Octagon. Last year in his rookie campaign, the 32-year-old continued blazing a path of destruction, collecting first-round finishes of Vinicius Moreira and Paul Craig to push his record to 9-0.

This weekend, the Fortis MMA product returns to square off with Devin Clark in a bout that should serve as another litmus test for the unbeaten upstart.

The 30-year-old Clark has struggled to find consistency over the course of his nine-fight UFC run, cobbling together a 5-4 record and alternating wins and losses over his last seven appearances. That said, Clark’s last three setbacks have all come against ranked opponents, so he’ll enter with a considerable edge in experience and strength of schedule on Saturday night.

While Menifield hasn’t garnered as much attention and praise as teammates like Geoff Neal and fellow light heavyweight Ryan Spann, it’s mostly due to the fact that those two — and others from the surging fight camp in Dallas — have gotten a head start on him.

All nine of his fights have ended in stoppages, he’s only been to the second round twice in his career and he needed less than four minutes to earn each of his first two UFC victories. Menifield is a promising new addition to the light heavyweight ranks and the kind of explosive athlete who could make a rapid climb up the rankings once he really starts putting everything together and fighting more frequently.

It might be best to get on the bandwagon now because if he keeps on like he has thus far, there won’t be many seats available after Saturday night.

Hooper scored a developmental deal following a quality victory over Canaan Kawaihae as an 18-year-old on Season 2 of the Contender Series, then receded into the background as he continued to hone his skills on the Pacific Northwest regional circuit. But after going unbeaten in three additional starts following his Las Vegas audition, Hooper was called up to the UFC late last year and made a splash in his debut, submitting Swedish heavy hitter Daniel Teymur at UFC 245.

It was a breakthrough week for the Enumclaw, Washington native, whose profile exploded when he paired his in-cage performance with a tour de force effort on social media where he roped veteran welterweight Ben Askren into his online shenanigans.

This weekend, Hooper makes his sophomore appearance in the Octagon in a matchup that should provide a great deal of clarity about where he stands in the featherweight division as he takes on 27-fight veteran Alex Caceres, who made his UFC debut when Hooper was just 11 years old.

The former Ultimate Fighter contestant has occupied this role before, having served as the experienced hand tasked with taking on a promising newcomer in bouts against Jimy Hettes, Sergio Pettis, Yair Rodriguez, and Kron Gracie in the past. Last time out, “Bruce Leroy” earned a unanimous decision victory over Steven “Ocho” Peterson, continuing a run of alternating results that stretches back six fights.

Hooper has a lot of things working in his favor at the moment, including tremendous height and reach for the division, slick scrambling abilities and the fact that he won’t turn 21 until September, and this weekend’s bout with Caceres will be a great measuring stick for where he’s at in his development.

The future is bright for “The Dream” and a victory on Saturday should cement him as one to keep tabs on in the featherweight division going forward.