Before the two titleholders meet to determine the one true king of the middleweight division, a trio of newcomers are looking to use the UFC’s latest stadium show as their own personal coming out party.
By E. Spencer Kyte, on Twitter @SpencerKyte • Sep. 29, 2019

The last time the UFC ventured to Marvel Stadium in Melbourne, Australia, the MMA world was turned on its head.

More than 55,000 people packed what was then known as Etihad Stadium and watched in awe as Holly Holm dismantled Ronda Rousey, playing the matador against the hard-charging, long-reigning champion before ultimately felling her with head kick just 59 seconds into the second round.

Fast forward four years, minus a handful of days, and the Octagon is set to return to the Docklands with a 12-fight card capped by a highly anticipated clash that will set a new course for the middleweight division and establish either Robert Whittaker or Israel Adesanya as the undisputed king of the 185-pound ranks.

Before the two titleholders meet to determine the one true king of the middleweight division, a trio of newcomers are looking to use the UFC’s latest stadium show as their own personal coming out party.

Right around this time two years ago, a raw, relatively unknown Australian heavyweight sauntered into the Octagon for his UFC debut. Two years later, Tai Tuivasa has firmly established himself as a Top 15 talent, one who competes this coming weekend on the main card against Serghei Spivac.

While he’s just 3-0 in his career, Tafa has been around combat sports and high level competitors for some time, as he trained with Tuivasa and Tyson Pedro alongside famed knockout artist Mark Hunt a number of years, and his older brother Junior is a surging kickboxing standout competing for Glory at the moment.

The 24-year-old is still developing, but has shown the kind of punching power and gameness that everyone has come to associate with heavyweights from the region, having won each of his first three pro appearances without venturing beyond the second round. He’s more athlete and fighter than mixed martial artist at the moment, but the same could have been said about Tuivasa when he debuted and “Bam Bam” has made considerable strides over the last two years and the potential is there for Tafa to do the same.

De Castro will serve as a perfect measuring stick for the newcomer at UFC 243 — a talented, dangerous fellow debutant who knows what it’s like to be the underdog and succeed who will surely force Tafa to be at his best in order to get a victory. Should that happen, don’t be surprised if the newest addition to the heavyweight division follows a similar path to the one charted by his friend and training partner two years earlier. 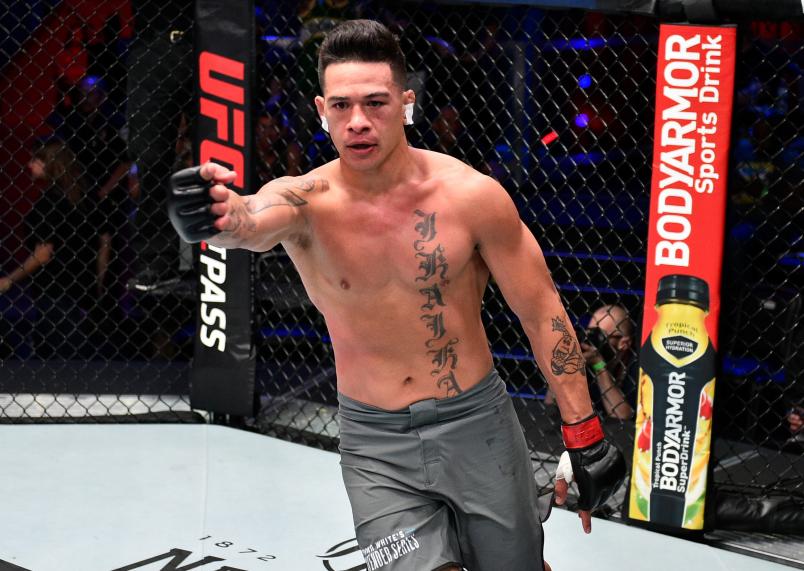 One year after he was forced to withdraw from an opportunity to compete on Season 2 of the Contender Series, Pitolo got his chance to compete in front of UFC President Dana White and the matchmaking duo of Sean Shelby and Mick Maynard and the Hawaiian made the most of his second chance.

Paired off with Season 2 alum Justin Sumter, the 28-year-old got loose with his hands, battering Sumter to the body before dropping him along the cage 97 seconds into the bout. It was a blistering effort for the undersized Pitolo, who accepted White’s suggestion to return to welterweight and makes his promotional debut this weekend against Callan Potter.

Brandishing one of the best nicknames in the sport — “Coconut Bombz” — Pitolo was making a name for himself on the regional circuit with a series of wins under the Victory FC banner before back-to-back losses knocked him slightly off course. But he rebounded with consecutive victories on either side of his Season 2 disappointment, then punched his ticket to the UFC with his impressive boxing display against Sumter this past summer.

Potter is an Australian veteran who dropped his UFC debut earlier this year against Jalin Turner, but could spoil Pitolo’s debut if the newcomer is not fully locked in on fight night. But if the relentless terror who turned up in Las Vegas against Sumter makes the trip to Melbourne and brings that same willingness to work the body and let his hands fly, it could be a very good night for the newest edition to the Hawaiian contingent competing in the UFC.

City Kickboxing has been one of the breakout camps in the UFC over the last couple of years, with UFC 243 stars Israel Adesanya and Dan Hooker leading the way. This weekend, another member of the Eugene Bareman-led squad joins the ranks as Riddell makes his promotional debut against Australian Jamie Mullarkey.

The 27-year-old newcomer is 6-1 overall, with three victories on either side of his lone defeat, including a TKO victory over current UFC welterweight Song Kenan and three consecutive victories this year — one in April, one in May and the last in July — carrying him into his Octagon debut on Saturday.

We talk all the time about how training with an excellent team can pay huge dividends and that is especially true for fighters competing on the big stage for the first time. While this may be his maiden voyage into the Octagon, Riddell’s coaches and teammates have been there many times before and he’s cornered in the UFC as well, so the spectacle of it all shouldn’t be an issue and his preparation is sure to be on point, especially with Adesanya and Hooker readying alongside him throughout this camp.

Mullarkey is a tough assignment right out of the gate — one of the top lightweights in the region who arrives on a four-fight winning streak and sporting a 12-2 record overall. He’s a proven finisher, as is Riddell, and that should make for an exciting fight that gets the masses in attendance fired up good and early, setting the stage for what should be another spectacular night in Melbourne.