One of my favorite things about writing this series is that it can serve as a way to remind readers of exceptional performances they might have forgotten over the last several months.

Life is busy, there are a ton of fights that take place every month and if an athlete goes four, five, or six months between appearances, it’s easy for them to get lost in the shuffle, especially if they’re at the outset of their UFC journey. If their break between bouts is even longer than that, it’s almost like debuting a second time because outside of the hardcore set, chances are the majority of fans won’t remember that single showing nine months ago, no matter how outstanding it was.

Thankfully, I’m a card carrying member of the hardcore set, have a freakish memory for all things fighting, and a space where I can remind those without my obsessive traits about the returning talents coming off impressive outings on a near-weekly basis.

This week’s offering features two fighters that fit that description, accompanied by a debuting lightweight whose older brother is already a member of the UFC roster.

The younger brother of UFC middleweight Abu Azaitar, who debuted last summer with a main card win over Vitor Miranda in Hamburg, Germany, this 29-year-old lightweight has started his career with 11 consecutive victories and looks to make it an even dozen with a win over Teemu Packalen this weekend.

After beginning his career on the German regional scene, Azaitar inked a deal with Brave Combat Federation. He went 4-0 in the promotion, claiming the lightweight title with a third-round stoppage win in his third appearance, but was stripped of the belt after moving up to welterweight for his most recent bout, a first-round knockout win last August.

Now more than a year after his last appearance, Azaitar looks to follow in his brother’s footsteps by shaking off the rust, stepping into the Octagon and securing a victory in his debut.

It’s always difficult to know what to expect from competitors like Azaitar who have faced very little adversity and opponents with limited experience on their way to the UFC, but his brother was able to make the successful transition to the biggest stage in the sport last year and now it’s his turn.

Sato made his promotional debut back in April, stepping into the cage opposite Ben Saunders in the popular veteran’s home state of Florida. He struggled with Saunders’ length and range early in the contest, but made adjustments between rounds, dropped the former TUF contestant with a clean left hand down the pipe early the second and put him away with a series of vicious elbows from top position soon after.

The former Pancrase standout is now 7-1 over his last eight fights with his lone setback coming against surging former TUF Brazil winner Glaico Franca, who has discovered new life since relocating to welterweight. Saturday in Abu Dhabi, Sato takes a step up in competition in a preliminary card showdown against durable Roufusport product Belal Muhammad.

The 31-year-old Muhammad has quietly gone 5-1 over his last six, with a gutsy performance in a losing effort opposite Geoff Neal at the start of the year standing as the only blemish during that stretch. He’s the kind of gritty, tested, talented fighter Sato needs to beat in order to potentially make a run in the welterweight division, so this weekend’s preliminary card showcase will go a long way to determining where the Japanese fighter fits in the UFC welterweight division. 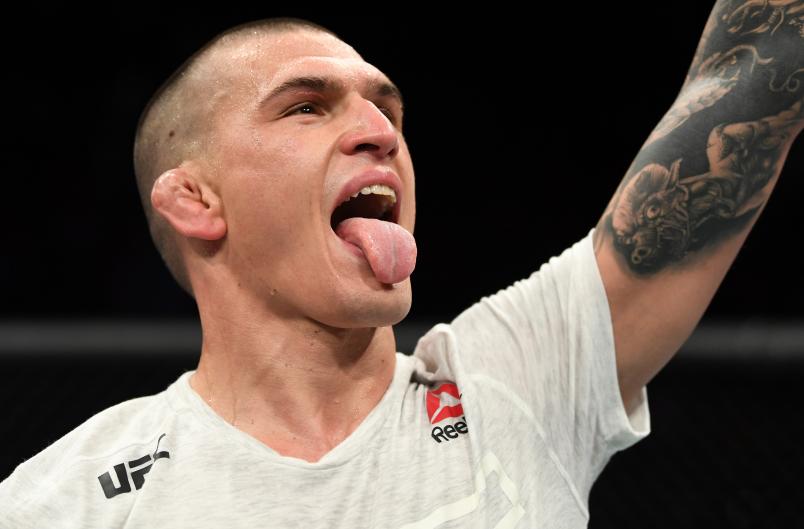 MONCTON, NB - OCTOBER 27: Don Madge of South Africa celebrates after his knockout victory over Te Edwards in their lightweight bout during the UFC Fight Night event inside Avenir Centre on October 27, 2018 in Moncton, New Brunswick, Canada. (Photo by Jeff

The 28-year-old from South Africa debuted as a considerable underdog against Contender Series alum Te Edwards last October in Moncton, New Brunswick, but quickly showed he was not to be trifled with.

He dropped Edwards less than 30 seconds in to the contest, threatened with a deep armbar two minutes later and controlled the remainder of the round, showing considerable skill off his back before pressing the action on the feet in the final 45 seconds of the first. As soon as the second round began, Madge rocketed across the cage and hit Edwards with a high kick that was partially blocked. Seconds later, he threw one on the other side, connecting flush and bringing the bout to an abrupt end.

Originally scheduled to face Magomed Mustafaev this weekend in Abu Dhabi, Madge will face newcomer Fares Ziam instead after the 31-year-old Russian was forced to withdraw.

In a division where making an impact is exceptionally difficult given the sheer depth of talent and number of fights that take place within the weight class each month, Madge has the potential to really stand out. He looked outstanding against Edwards last fall and a similar showing on a card where the 155-pound weight class is front and center should force people to pay closer attention to the “Magic Man” going forward.