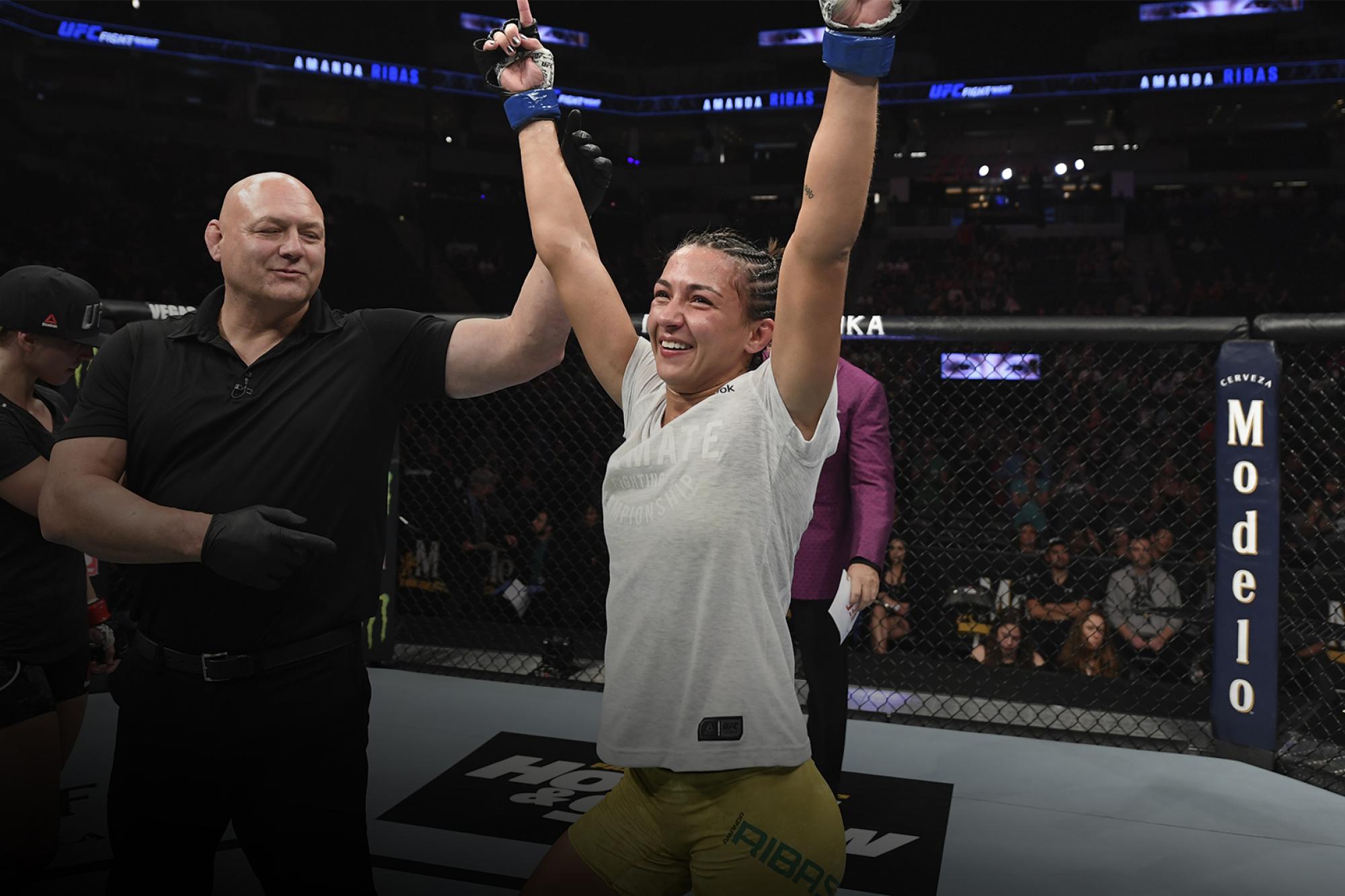 On the Rise: Tampa Edition

After two months traveling the world, the Octagon returns to the United States this coming weekend as the UFC touches down in Tampa, Florida with a staggering 14-fight card headlined by former strawweight champion Joanna Jedrzejczyk squaring off with surging contender Michelle Waterson.

Coming out of UFC 243’s middleweight title unification bout and with some other massive shows on the horizon, this card is still flush with fighters who have started making some noise in their respective divisions and some key tests for others who are trying to take a big step up the divisional ladder.

Saturday’s event at Amalie Arena also features a tetra-pack of newcomers keen on using this return to the home of the NHL’s Tampa Bay Lightning to spark a surge in interest and attention in their careers as their UFC journeys get underway in earnest.

This is the UFC Tampa edition of On the Rise.

The 26-year-old Ribas was a bundle of question marks heading into her UFC debut earlier this year.

Coming off a three-year hiatus and facing the streaking Emily Whitmire, few could say with any certainty how the Brazilian would fare in her initial appearance inside the Octagon, but the American Top Team representative quickly made it clear that she is someone to keep tabs on in the strawweight division. After dominating the opening round, Ribas got right back to work in the second, advancing to Whitmire’s back and drawing a tap from the former TUF competitor a little more than two minutes into the round.

It was the type of performance that put Ribas on the radar and now she gets a chance to establish herself as one of the top young talents in the division in her sophomore appearance as she welcomes new mom and rising star Mackenzie Dern back to the Octagon on Saturday.

A highly decorated grappler and highly-touted prospect, Dern has earned victories in each of her first two UFC appearances to push her record to 7-0 overall, but hasn’t competed since submitting Amanda Cooper at UFC 224, having taken time off to have her first child. If Ribas can spoil Dern’s return and show that she’s the superior mixed martial artist this weekend in Tampa, her stock will skyrocket and she’ll position herself for even greater opportunities next time out.

Another Contender Series grad looking to translate success in Las Vegas this past summer into a triumphant UFC debut is Baeza, who scored a unanimous decision win over Victor Reyna to run his undefeated streak to start his pro career to seven. The 27-year-old has never actually tasted defeat in the cage, having gone 6-0 as an amateur before making the transition to the professional ranks and he’ll look to keep it that way on Saturday when he squares off with Hector Aldana.

This is a home game of sorts for Baeza, who trains at MMA Masters in Miami, which should help ease any nerves he may experience heading into the Octagon for the first time. Standing six-foot-two, the undefeated prospect has tremendous size for the division and makes good use of his size, as he showed during his contract-winning effort inside the UFC Apex in June.

Aldana was sidelined for three years following his time on Season 2 of The Ultimate Fighter Latin America and hasn’t been able to find his footing since returning to action, dropping a pair of bouts to Song Kenan and Laureano Staropoli since returning. That said, he’s a durable, aggressive fighter who has already crossed the threshold into the UFC Octagon on two occasions, and he won’t be fazed by the bright lights that accompany competing on the biggest stage in the sport.

Welterweight is a deep division where making headway is hard, but if Baeza can turn in a performance comparable to the one he delivered to secure this opportunity on Saturday, fans should come away from this weekend’s upcoming event talking about “Caramel Thunder” and his prospects in the 170-pound weight class.

This is probably your last chance to be in on Spann relatively early, as the Fortis MMA product has already posted a pair of victories inside the Octagon and enters this weekend's showdown with Devin Clark off a first-round knockout win over Brazilian legend Antonio Rogerio Nogueira.

Spann is a two-time Contender Series alum who came up short in his first attempt to garner a UFC contract, losing to Karl Roberson early in Season 1. But two months later, "Superman" was back in the cage, kicking off what is now a six-fight winning streak that includes his Contender Series win over Emiliano Sordi, his debut victory over Luis Henrique and his stunning finish of Nogueira in Brazil back in the spring. Currently in the best form of his career, the 28-year-old is on the cusp of cracking the Top 15 in the wide-open light heavyweight division and a dominant effort against Clark could carry him into the rankings.

While the division has recently seen an influx of former middleweights looking to reinvent themselves by cutting less weight, Spann is a legitimate light heavyweight, standing six-foot-five and boasting an 81.5-inch reach. He's a proven finisher, with his win over Henrique being one of only two decisions amongst his 16 career victories, and though he was heralded as a submission specialist heading into his first Contender Series appearance, Spann has shown he's more than capable of settling opponents with his hands as well.

Clark is a tough out who has long shown promise, but has struggled to find consistency inside the UFC cage. As much as Spann is on the cusp of cracking the Top 15, this opportunity is doubly important for Clark who can catapult himself into the group just outside the rankings by pulling out a victory, which means the Sayif Saud-trained fighter from Beaumont, Texas will need to be at his best when he makes the walk to the Octagon for the third time on Saturday night. Should he secure another victory, don't be surprised if Spann ends up standing across the cage from one of those well-established divisional newcomers early next year.