On the Rise: Sacramento Edition

Sacramento features a pair of intriguing Octagon debuts and the sophomore appearance of a breakthrough fighter who has receded into the background over the last 18 months. Here’s a closer look at those three competitors.
By E. Spencer Kyte • Jul. 8, 2019

Hot on the heels of another electric International Fight Week in Las Vegas, the UFC rolls into the California capital for a date at De’Aaron Fox’ place, the Golden 1 Center in Sacramento.

Headlined by a potential title eliminator between former featherweight queen Germaine de Randamie and undefeated Nor-Cal rising star Aspen Ladd, Saturday’s event is strong from start to finish, featuring crucial bouts in several divisions, as well as the return of the city’s favorite fighting son, Urijah Faber, who will be final of several members of Team Alpha Male to enter the cage when he takes on emerging prospect Ricky Simon in the co-main event of the evening.

The card also features a pair of intriguing Octagon debuts and the sophomore appearance of a breakthrough fighter who has receded into the background over the last 18 months.

This is the UFC Sacramento edition of On the Rise.

Turman made his professional debut 18 days after turning 17, earning a second-round submission win over Diego Pedroso. Since then, the now 22-year-old middleweight has amassed 14 additional wins in 16 starts, carrying a 15-2 mark into his promotional debut this weekend against Karl “Baby K” Roberson in the opening bout of Saturday’s main card.

A native of Curitiba, Turman arrives in the UFC on a four-fight winning streak, having scored his biggest win to date last time out when he submitted former TUF Brazil contestant Marcio Alexandre Jr. in the first round. Representing the Gile Ribeiro Team that previously graduated Luan Chagas into the UFC, Turman is the rare mix of an experienced fighter who is still extremely young, and therefore has a ton of room to grow as a competitor.

Stepping in for Welshman John Phillips, the Brazilian newcomer is set to square off with Roberson, a Contender Series alum who has gone 2-2 in his first four Octagon appearances. Each of the former kickboxer’s losses have come by way of submission, so while Turman enters as the underdog, there seems to be a clear path to victory for him if he can get Roberson on the ground and add to his six previous submission wins. 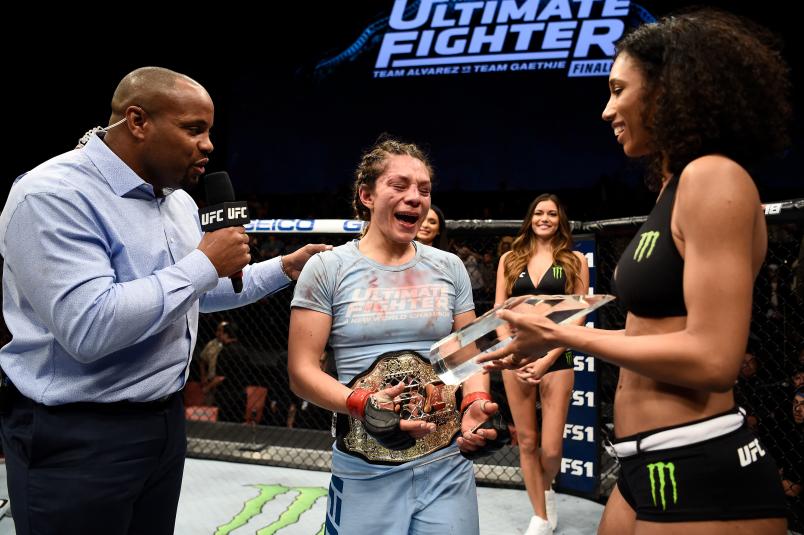 The one and only time Montano has officially set foot inside the Octagon, she won UFC gold.

On December 1, 2017, the 30-year-old completed a Cinderella run through the competition on Season 26 of The Ultimate Fighter with a unanimous decision victory over Roxanne Modafferi to become the inaugural UFC women’s flyweight champion. Injuries then kept her out of action for several months and days before she was scheduled to defend her title against Valentina Shevchenko at UFC 228, Montano was transported to the hospital due to complications from her weight cut.

Now, 19 months after claiming gold in her first foray into the eight-sided battleground, Montano is set to return, having moved up a division to ply her trade in the bantamweight ranks. Originally scheduled to face Sara McMann, the returning former champion will instead face fellow TUF winner Julianna Pena, who is ending her own two-year hiatus following the birth of her first child to step in for the injured McMann.

Montano showed a ton of toughness and upside during her time on The Ultimate Fighter, besting Modafferi to win the title after dispatching the third seed Lauren Murphy, the sixth seed Montana De La Rosa (nee Stewart) and the second seed, Barb Honchak, but obviously struggled with her weight. With that issue presumably out of the way, she has a chance to make an instant impression in her new division by taking out the returning Pena, who lost a title eliminator to Shevchenko in her final appearance before pressing pause to start a family.

The 25-year-old UFC newcomer ended a 42-month hiatus from the sport last August with a first-round submission win over Angela Samaro and followed it up by outworking Jamie Moyle in her return to the Invicta FC cage. Then in May, Van Buren took part in the promotion’s initial Phoenix Rising event to crown a new strawweight champion and rattled off wins over Manjit Kolekar, Juliana Lima, and Kailin Curran in the span of a few hours to claim the vacant belt.

A powerhouse with proven finishing instincts, Van Buren now gets the opportunity to establish herself as someone to watch in the division in the second half of the year as she squares off with Souza. After earning a quick submission finish in her promotional debut, “Livinha” pushed her winning streak to four with a split decision victory over Sarah Frota last time out to put herself on the fringes of the Top 15.

The division currently feels wide open, especially in the lower half of the rankings, so a strong showing for Van Buren over an established name with a pair of UFC victories will go a long way to helping “The Bull” continue her charge towards the top of the division.