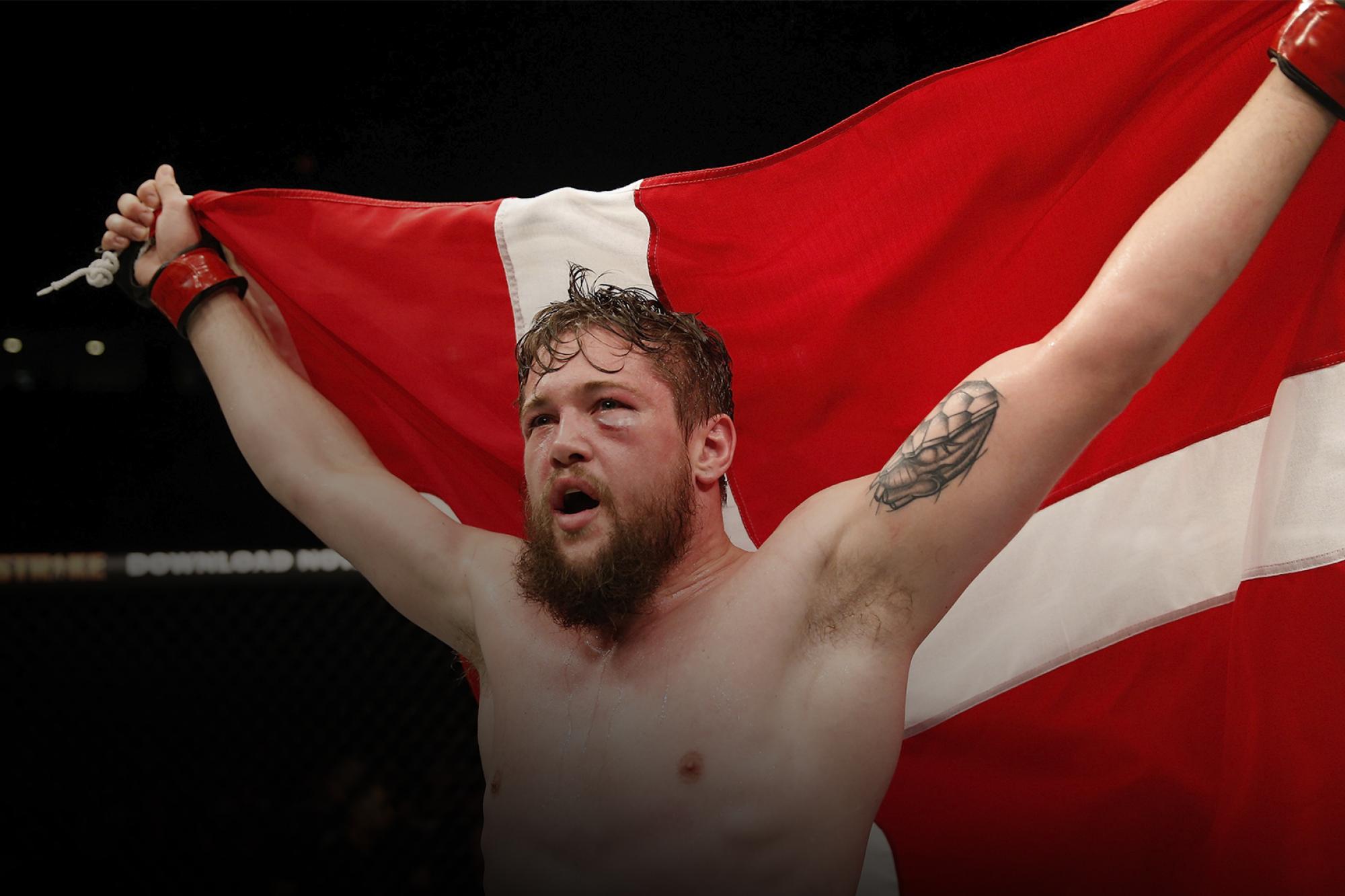 On The Rise: Copenhagen Edition

Here’s a closer look at the athletes on the rise for this weekend's card. This is the Copenhagen edition of On the Rise.
By E. Spencer Kyte, on Twitter @SpencerKyte • Sep. 22, 2019

One of the many cool perks we get from covering this diverse sport is learning more about places around the world, both through speaking to athletes from those places and simply by the UFC continuing to expand its reach and bring the Octagon to different locales.

This weekend, the promotion touches down in Copenhagen, Denmark for the first time, prompting me to actually spend a little time figuring out where Denmark is because up until this very moment, the Scandinavian country was one of those “I think I kind of know where it is” places that I would need a map to properly locate.

Kind of like Delaware, which, as a Canadian, is one of those states I knew a little about because of The Little Brown Jug, an historic harness race contested at the Delaware Fairgrounds every year, but I never really knew where it was until I looked it up on a map and found it nestled under New Jersey on the east coast.

The same goes for Denmark, which is located north of Germany and connects to Sweden via the Øresund Bridge, a combined railway and motorway that spans the Øresund strait between the two countries.

It is the homeland of “The Hitman,” Martin Kampmann, a former middleweight and welterweight contender in the UFC who engaged in a memorable battle with Diego Sanchez back in the “UFC on Versus” era, as well as two of the three competitors featured in this week’s look at emerging names to keep an eye on going forward.

This is the Copenhagen edition of On the Rise.

The 34-year-old welterweight gets a hometown fight to kick off his second stint on the UFC roster after a three-year hiatus.

Dalby first arrived in the UFC with a perfect 13-0 record, having won and defended the Cage Warriors title in his final two appearances. In his debut, he edged out a fellow newcomer named Elizeu Zaleski dos Santos and then rallied late to secure a draw over another prospect, Darren Till, in his second sojourn into the Octagon. But he then dropped back-to-back contests to Zak Cummings and Peter Sobotta, resulting in his release.

He fell into a depressive, self-destructive state, which he has discussed openly, but lost his comeback fight to Carlo Pedersoli Jr., who was signed by the promotion off the strength of that victory. Since then, Dalby has gone 3-0 with one no contest result, earning three straight stoppages and claiming the interim Cage Warriors welterweight title before his unification bout against Scott Houston was halted two minutes into the third round when the canvas was deemed unsafe.

Having already proven his toughness and tenacity several times over, it will be interesting to see how this rejuvenated version of Dalby makes out in his second run on the UFC roster. Facing Alex Oliveira, the Danish veteran gets the chance to prove himself immediately, as the Brazilian “Cowboy” is a confirmed tough out who starts quickly, throws nothing but smoke and has faced nothing but tough competition since joining the UFC ranks four-plus years ago.

Unbeaten in eight starts as a professional, Madsen is an intriguing new addition to the lightweight ranks.

While older than most prospects at age 34, the undefeated Dane is a three-time Olympian, having claimed the silver medal in Greco-Roman wrestling at the 2016 Summer Games in Rio de Janeiro. Though he began his transition to mixed martial arts before that, Madsen only really went “all in” with MMA after Rio, and since the start of 2018, he’s rattled off six consecutive victories.

Training under the aforementioned Martin Kampmann, who made a smooth shift to coaching following his own fighting career, Madsen spent a good portion of his prep time for his UFC debut in Las Vegas, working at both Xtreme Couture and the UFC Performance Institute. Although some Olympians have struggled in their shift to the cage, Madsen has shown a great deal of upside while taking care of business each time out.

This weekend in Copenhagen, he squares off with 25-year-old Italian Danilo Belluardo, who dropped his promotional debut to Joel Alvarez earlier this year in Stockholm. Prior to that, Belluardo had won six straight, and with 16 bouts under this belt, he’s one of the most seasoned competitors Madsen has faced to date.

Although he’s a little older compared to most high-level wrestlers who move from the mats to mixed martial arts, Madsen also competed at an even greater level than the host of Division I standouts who shift their focus following their collegiate careers, and he has encountered little resistance on his way to the UFC.

If he’s able to maintain his unbeaten run through his debut, it wouldn’t be surprising to see Madsen get an expedited push in the loaded lightweight ranks in order to see what “The Olympian” can really do inside the Octagon.

Bantamweight is already bristling with talent, but Shore has the kind of potential to very quickly include himself in the growing list of emerging names working towards contention in the 135-pound ranks.

Following a 12-0 run as an amateur, the 24-year-old from Wales carries an 11-0 mark as a pro into his Octagon debut against Nohelin Hernandez at Royal Arena in Copenhagen on Saturday.

Shore first gained wider attention with his unanimous decision win over UFC vet Vaughan Lee in March 2018, then followed up that victory by quickly beating Weslley Maia and winning the vacant Cage Warriors bantamweight title with a third-round stoppage win over fellow unbeaten prospect Mike Ekundayo to close out the year. He started his 2019 campaign by successfully defending his title with a third-round submission win over Scott Malone and now looks to score a victory in his first foray into the Octagon.

The bantamweight newcomer is a relentless, high-pace fighter who has only been the distance twice and doesn’t allow opponents to recover when he’s got them hurt and sees an opportunity to finish. The division is loaded with up-and-comers at the moment and the top tier contenders are mostly in their prime, so making a run towards the top of the weight class is going to be a challenge, but Shore profiles as someone capable of mixing it up with the best of the best in the 135-pound ranks for the foreseeable future.