On the Rise: Auckland Edition

Here’s a closer look at three athletes hoping to forge a path to the top of their respective divisions this weekend
By E. Spencer Kyte, on Twitter @SpencerKyte • Feb. 16, 2020

Saturday’s event at Spark Arena is the kind of fight card that excites me.

While it’s easy to get up for a star-studded pay-per-view laced with bouts that carry obvious statkes and will have immediate, noticeable ramifications on the title chases in various divisions, events like this weekend’s return to Auckland are the ones that often produce efforts that become pivotal moments in the career of a future contender or eventual champion.

Former middleweight champion Robert Whittaker debuted in the 185-pound ranks on a card like this. Max Holloway began his 13-fight winning streak on a comparable show in Singapore, and reigning women’s strawweight titleholder Zhang Weili’s breakthrough sophomore effort took place at an upstart-heavy event in Singapore.

One half of Saturday’s main event, Dan Hooker, made his UFC lightweight debut the last time the promotion brought an event to his hometown, while current featherweight kingpin Alexander Volkanovski’s registered his second win in the Octagon earlier that evening.

Here’s a closer look at three athletes hoping to forge a similar path to the top of their respective divisions this weekend.

This is the UFC Auckland edition of On the Rise.

The lightweight division is unquestionably one of the deepest, most-talent rich divisions in the sport, running in a three-horse race alongside the weight classes on either side of it — featherweight and welterweight. That depth and the constant ascent of new names and new contenders into the spotlight and towards the rankings make it easy for talented competitors to brushed aside by bigger names and prospects with more buzz.

Mustafaev is one of those talented competitors, as he enters his bout against Brad Riddell on Saturday with a 17-2 record overall, a 3-1 mark inside the Octagon, and coming off a brilliant first-round stoppage win over Rafael Fiziev last time out.

Part of the reason the skilled standout from Dagestan has fallen under the radar is that his last outing was his first appearance in more than two years, but after a Performance of the Night-winning turn in Saint Petersburg last April, he is certainly one to keep closer tabs on going forward, starting this weekend in Auckland.

An action fighter who has never been to a decision in his career, the 31-year-old earned a pair of quality wins before suffering his lone UFC to loss to perennial contender Kevin Lee, and following his blistering effort against Fiziev with a comparable performance against City Kickboxing’s Riddell would merit a significant step up in competition next time out.

While lightweight is always bristling with talent and competitors jockeying for position throughout its ranks, Mustafaev has previously exhibited top end potential and is definitely someone to watch this weekend and beyond.

Matthews is one of those athletes who feel older than he actually is because so much of his career has transpired inside the Octagon.

A cast member on The Ultimate Fighter Nations, “The Celtic Kid” is still just 25 years old, yet his appearance on Saturday night against Emil Meek will mark the 14th time in 20 professional bouts that he’s crossed the threshold into the UFC cage. Though things haven’t always gone his way, the fact that Matthews has been able to learn, develop, and improve as a mixed martial artist while competing at the highest level in the sport provides a different kind of experience than he would have garnered mowing down overmatched opponents on the regional circuit.

He’s gone 4-1 since moving up to lightweight, including a unanimous decision win over the streaking Li Jingliang, and he rebounded from his lone defeat with a patient, measured win over Rostem Akman last time out. Saturday evening, he faces off with the returning Meek, a charismatic fan favorite who earned a dominant victory in his promotional debut in 2016, but enters on a two-fight skid, having last competed in July 2018.

Matthews is still putting all the pieces together and has not yet reached his athletic prime, making him a candidate to potentially follow a comparable path to the one blazed by fighters like Whittaker and Holloway, both of whom faced some challenges early in their UFC careers before everything came together and they worked their way to the top of their respective divisions. 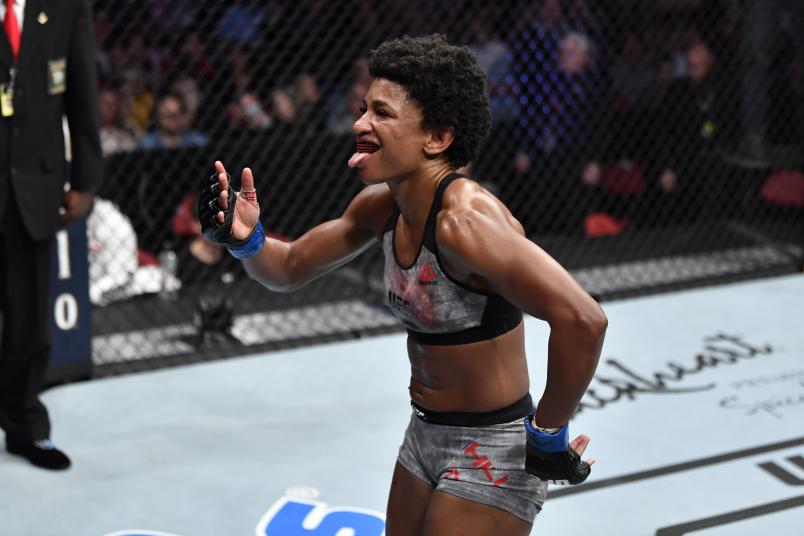 It was only a few weeks ago that I talked to Hill about her penchant for taking short-notice fights and her revamped mindset heading into her bout with Hannah Cifers in Raleigh, North Carolina. Just as she did when the UFC called to offer her that bout, Hill picked up the phone again when the promotion called in need of a new opponent for Loma Lookboonmee this weekend in New Zealand.

Not only does the former Ultimate Fighter contestant feel better when she’s competing as frequently as possible, but her performances over the her last two outings illustrate that her shift in mindset is starting to pay dividends as well.

After failing to secure a finish in any of her first four UFC victories and amassing a 4-7 record in the Octagon through her first 11 appearances, Hill has earned back-to-back stoppage wins over the last five months, following up her dominant effort in Mexico City against Ariane Carnelossi with an even better performance against Cifers last month in North Carolina.

The talent has always been there with Hill, who went 4-0 while winning and successfully defending the Invicta FC strawweight title in between her two stints in the UFC; now the results are starting to follow. If she can pick up her second win of 2020 this weekend, “Overkill” could very well earn herself a matchup with a Top 15 opponent next time out…