The action keeps on rolling inside the UFC Apex this weekend as the fourth of five events headed into the Octagon this month touches down with Frankie Edgar making his bantamweight debut in the main event against divisional stalwart Pedro Munhoz.

While the matchup on the marquee is absolutely must-watch, the real beauty of this fight card is in its depth, as up and down the lineup, there are intriguing pairings featuring newcomers, emerging talents, and established veterans in quality matchups that should produce excitement.

Three particular fighters slated to compete outside of the main event stand out from the collection heading into the cage this weekend, each for a different reason.

Here is a closer look at those competitors.

This is the August 22 edition of On the Rise. 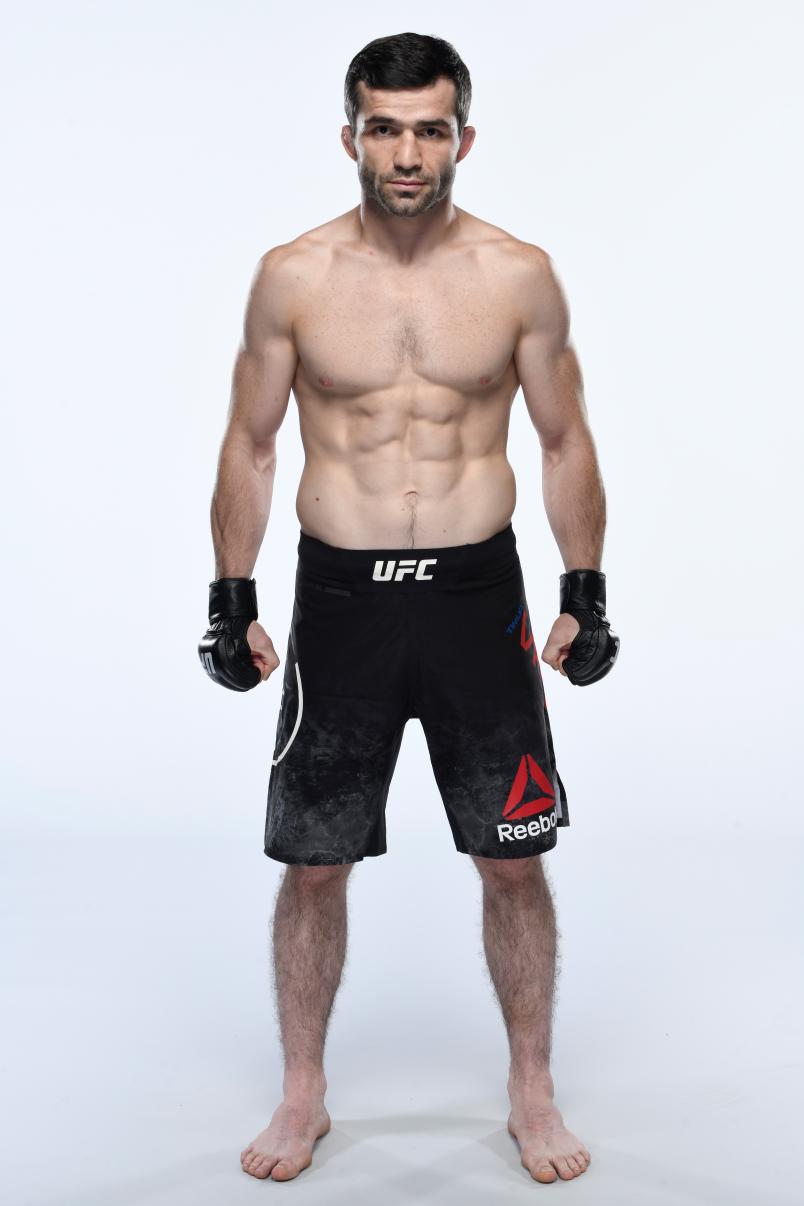 Timur Valiev poses for a portrait during a UFC photo session on July 30, 2020 in Las Vegas, Nevada. (Photo by Mike Roach/Zuffa LLC via Getty Images)

Speaking with renowned striking coach Mark Henry over the years, Valiev’s name was one that always came up when talking about the elite talent he works with and how they all help each other get better. He was, in many ways, the unheralded member of the New Jersey collective affectionately known as “The Iron Army” — a talented fighter competing outside the UFC with a strong record, stellar credentials, and a group of world-class teammates and coaches who all sung his praises.

Saturday night, UFC fans get their first chance to see why Henry and the rest of the crew have always been so high on Valiev as he makes his first foray into the Octagon in a clash with fellow newcomer Mark Striegl.

The 30-year-old Valiev is 16-2 overall and enters this weekend’s clash on a six-fight winning streak, which began when he avenged a split decision loss to Chris Gutierrez, who is currently riding a four-fight unbeaten streak inside the Octagon. In addition to going 1-1 in a pair of bouts with “El Guapo,” Valiev also boasts victories over veterans Ed West and Tito Jones, as well as upstarts Max Coga and Bekbulat Magomedov.

Saturday’s matchup with Striegl is a perfect introductory pairing for the promotional newcomer – an assignment against a fellow debutant looking to find his way in the talent-rich bantamweight division who has an impressive 18-2, 1 NC record, including first-round submission wins over veteran Harris Sarmiento and UFC flyweight contender Kai Kara-France.

There have been a number of high-profile debuts in recent years and plenty of rookies who made a splash in their debuts; now we get to see if Valiev can do the same. 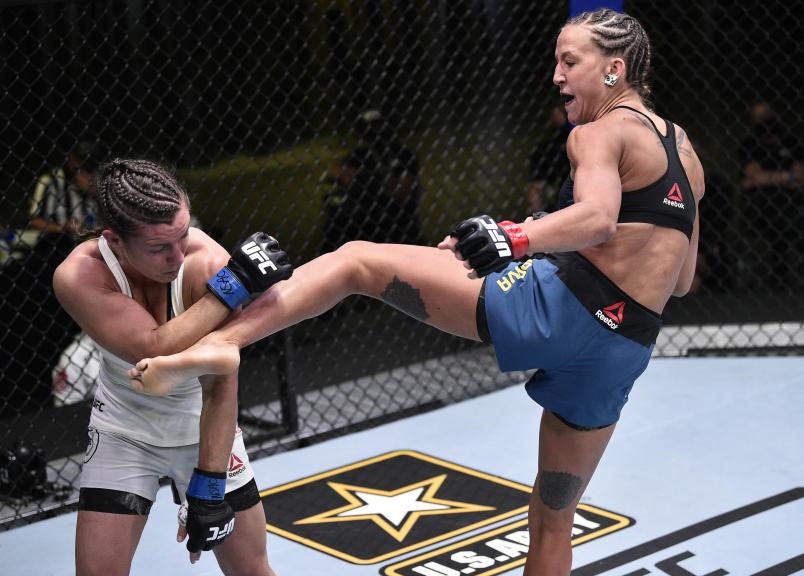 Watch enough fights and you’ll reach a point where you can just pick out potential superstars because of the way they carry themselves and the little flashes that fleck their early performances.

Agapova is one of those fighters.

There was something intriguing about the 23-year-old from Kazakhstan when she appeared on the Contender Series last summer, and her loss to Tracy Cortez didn’t do anything to dampen that potential. But when Agapova decided to sign with Invicta FC, relocated to South Florida in order to train at American Top Team and then earned back-to-back finishes literally a month apart, it was clear she was one to keep close watch over going forward.

Earlier this summer, Agapova made her UFC debut and it took her a little more than half a round to show she’s a full-blown potential superstar as she made quick work of Hannah Cifers and then exhibited some strong Joanna Jedrzejczyk vibes in her post-fight moments. Now 9-1 as a professional, she gets another potential showcase opportunity this weekend when she squares off with Shana Dobson.

As someone who is always quick to want to pump the brakes when people are getting too far ahead of themselves with prospects, I have to be sure to rein myself in here, as well, as Agapova is still extremely young and in the very early stages of her career, plus she lost a decision to the best fighter she’s faced thus far. She’s a couple years away from being a contender and needs to be brought along accordingly.

That being said, training at ATT is a tremendous positive as she is surrounded by elite coaches and training partners, and there is no denying she has that “It Factor” that jumps off the screen at you. Again, that doesn’t mean she’s destined for greatness and incapable of falling short of expectations, but as far as UFC sophomore appearances go, this is one you’re going to want to check out because if everything goes according to plan, Agapova is someone you’re going to be hearing a great deal about in the coming months and years. 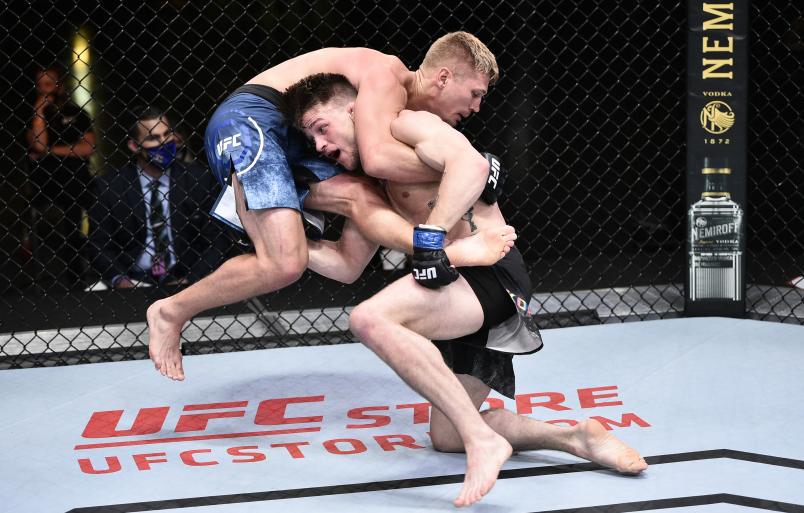 Max Rohskopf takes down Austin Hubbard in their lightweight bout during the UFC Fight Night event at UFC APEX on June 20, 2020 in Las Vegas, Nevada. (Photo by Chris Unger/Zuffa LLC)

Hubbard is one of those fighters who is better than his record indicates, and that’s saying something because he’s 12-4 heading into this weekend’s rescheduled pairing with Joe Solecki.

The 28-year-old Elevation Fight Team member lost to a 40-fight UFC veteran in his ninth professional appearance, got tossed in with Davi Ramos and lost a decision in his promotional debut, and was out-working Mark O. Madsen at the end of their UFC 248 encounter earlier this year, leaving the Danish Olympian bruised despite coming out on the wrong end of the decision.

He was slated to face Solecki towards the end of June, but the Contender Series alum had to withdraw the week of the fight and was replaced by highly touted prospect Max Rohskopf. After a sluggish first round, Hubbard found his groove in the second and battered the unbeaten newcomer to the point that he asked out of the fight before the start of the third round. Now Solecki is healthy and ready to go and they’ll get after it this weekend.

There is a certain je ne sais quoi about Hubbard’s game that I really like: the way he digs to the body with his punches, his indefatigable presence, the way that he’s already polished and professional, yet still shows room for growth and development; they’re all quality traits for an emerging fighter working his way up the ranks in a strong division and elements that will only get better as he continues to work with the talented crew at Elevation.

This pairing with Solecki is another quality test for “Thud,” as he has strong grappling, is coming off a very good win over Matt Wiman, and has flashed solid upside himself.

With a second straight win, Hubbard should earn another step up in competition and, at the rate he’s going, landing a place on the fringes of the Top 15 before the year is out is not out of the question.