Coming off his first losing pay per view; Gianni “The Greek” Karalis is back and ready to take the casinos to the cleaners.

As previously discussed, the key to long term, successful sports betting isn’t betting your favorite fighters or predicting the winners. It’s making the bet with the most value. A key component getting the most value out of a bet is knowing when to make the bet and for one fighter, that time may be over.

“Nunes was an underdog in six of her last seven fights,” Karalis said. “But if you look at those matchups, it was warranted.”

Nunes, living up to her nickname, seems to exclusively fight number one contenders, champions or other people she’s expected to lose to which has resulted in plenty of lost money. Even the money of the sharpest of the sharp.

Between straight bets and parlays, “The Greek” has essentially lost an SUV worth of bets and now that it’s been proven she can take out any opponent in her way, it’s time to board the Nunes train, right? Wrong.

While, yes, she’s now likely to win and considered a lock against most other opponents in the field, it goes back to Gianni’s golden rule.

“As much as I like Amanda Nunes on Saturday and my prediction is she does win, I can’t justify that betting line where she’s sitting at right now,” Karalis said. “Right now, I see her sitting at -450 at some places. So, to break even, she’s got to win 80% of the time in this situation. I just can’t get there.”

When odds are that stacked against a fighter like Holm, it may not be the most valuable bet but it’s definitely one most will play and when they do, it’s also all about timing the bet to maximize profits, even when they don’t have much value to begin with.

A perfect example of this is Jon Jones vs Thiago Santos.

Riding a wave of bettors who are still suffering from “upset fever” ever since Ruiz’s knockout of Anthony Joshua, the Jones vs Santos line has started off with a strong swing towards Santos. Too strong. While he’s still a large underdog, the public had the line so far over that as it evens out closer to the event, it’s the first time since Jones fought Rashad Evans that the line has moved in his favor.

Instead of the last-minute surge of people gunning for an upset against Jones, the last surge is people leaning towards “Bones.”

“I would usually say that the best time to bet him is a few days before the fight, when people are first getting excited for the fight,” Karalis said. “But against Santos, I would say that come Saturday morning, I would have my bet in. After that, I don’t think that the betting public will be able to bring the line down enough without having wiseguys taking advantage of it.”

In reality, this card is tailor made for parlay bets. A large amount of the key fights are fights with large odds and near-locks. So now comes the key to timing. While it’s important to repeat the word “timing” and the point of it, Gianni puts it into language that even the most novice of square bettors can understand. The average bet is between $20 and $25. Say you put a $25 bet on Jon Jones at the wrong time and he wins. You still win money back so you’re a success in that regard, but what if it’s timed right? Betting him when the odds were at their worst, a $25 bet would give you about a $3 return. Betting at the right time would give you a $5 return.

“It doesn’t sound like that much, the difference between $3 and $5, but it really is,” Karalis said. “You’re looking at about double.” 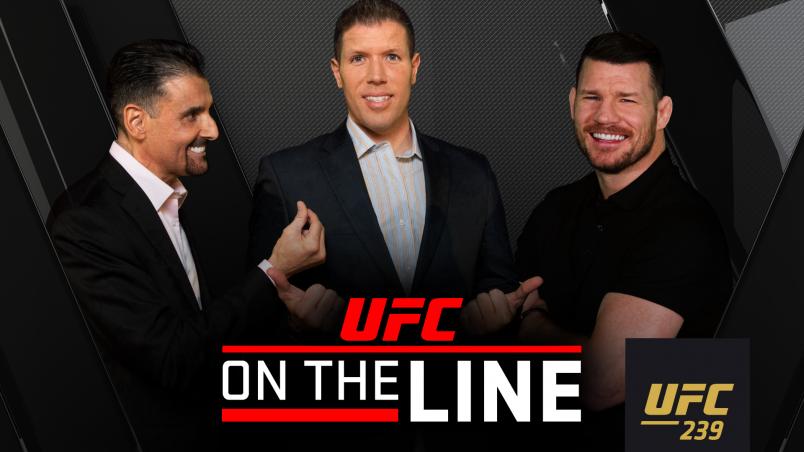 To assume you’re going to make a large sum betting $25 on Jon Jones to begin with is a concept even squares know is unrealistic but nearly doubling your money is incentive enough to time things right. Because again, it’s all about the value.

For more on who Gianni has and who you should have too ahead of UFC 239 catch “The Greek” alongside Brendan Fitzgerald and Michael Bisping in the latest episode of UFC On The Line, ONLY on UFC FIGHT PASS!