O'Malley predicts his best performance to come at UFC 222 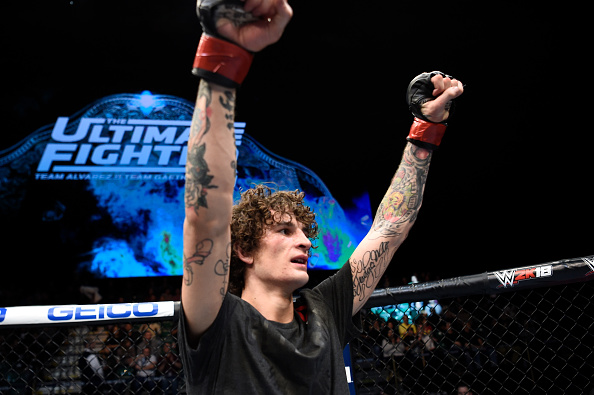 Sean O'Malley celebrates his decision victory over Terrion Ware in their bantamweight bout during the TUF Finale event inside Park Theater on December 01, 2017 in Las Vegas, Nevada. (Photo by Jeff Bottari/Zuffa LLC/Zuffa LLC via Getty Images)" align="center" />
The last time we checked in on Sean O’Malley, the director of “The Sugar Show” didn’t believe there was a target on his back placed there by fellow bantamweights who were intently watching his rapid rise in the public eye and wanting to put an end to that ascension.

Now, he’s gone from Dana White’s Tuesday Night Contender Series to the UFC to a UFC Pay-Per-View card. Has his answer to that target on his back question changed?

“No,” he said as he approaches his Saturday bout against Andre Soukhamthath. “I feel like I’m gonna go out there, perform really well, and I don’t know if they’re gonna want to fight me. They’re gonna see how well-rounded my game is and I’m not gonna feel like I have a target on my back. Maybe a couple guys will be calling me out, but I haven’t really thought about it.”

If there’s a 23-year-old as cool under pressure as O’Malley is, he or she is hiding out somewhere. There apparently is no way to rattle the Montana native, and that was evident in his Octagon debut, as he held off a spirited effort by Terrion Ware to win a hard-fought unanimous decision. For a lot of hot prospects, when the reality sets in that they can’t knock everybody out, the wind leaves their sails and it opens the door for an unexpected loss. But when faced with adversity, O’Malley looked like he was having a ball.

“I get that tired in practice and I keep pushing,” said the MMA Lab product. “In the second round, I was tired, but I didn’t break, I didn’t quit – I kept going. So I got to show my heart, and I knew my cardio was there. I just had to catch my second wind, and at the end of that fight, I was on top, throwing elbows, and I had three takedowns in the last round, so I think I would have broke him first. Yeah, I was having the time of my life, it was awesome. That was a super fun fight. He was a super tough kid. He stood in there and absorbed a lot of punishment that a lot of people go down from and he stuck in there.”

Next up is Rhode Island veteran Soukhamthath, who had a rough start to his UFC career when he lost a pair of split decisions, but he took the judges out of the equation in fight three, as he halted Luke Sanders in the second round. He’ll bring that momentum into this weekend’s bout, but O’Malley expects to put that to an end fairly quickly.

“A lot of people show up confident to fight me,” he said. “They see me on TV, they see me in person, and they think, ‘Oh, he’s pretty fast.’ But once you stand in front of me, it’s a different level of speed that you just don’t understand. I told Terrion before walking out, ‘I’m too fast, you’re gonna feel too slow.’ And at the end of the first round in his corner, he told his coach, ‘I feel slow.’ I don’t know how Andre’s feeling, I’m sure he’s feeling confident going into this fight, but once you step in there and I’m cracking you with stuff you don’t even see, his confidence level is going to go down, I’m gonna start pecking at him and landing a shin across his chin.”

This is the same Sean O’Malley who began training in order to become self-confident, right? Guess that’s working out.

“It worked out perfectly,” he laughs, admitting that he doesn’t even remember that teenager he once was anymore.

These days, being different from everyone else isn’t something to be ridiculed, but celebrated.

“It’s awesome,” he said. “I love being in the fight business. I can be who I want to be. I can go out there and entertain and be myself and people are attracted to that.”

And according to Mr. O’Malley, you ain’t seen nothin’ yet.

“This is gonna be my best performance,” he said. “I feel a hundred percent and I feel super good about this fight. This kid’s slow. He’s similar to the last five guys I’ve fought and I knocked out four of them. I’m gonna go out there and hit this kid a lot and he’s gonna go down. I’m definitely going to perform better in this fight than I did last fight.”