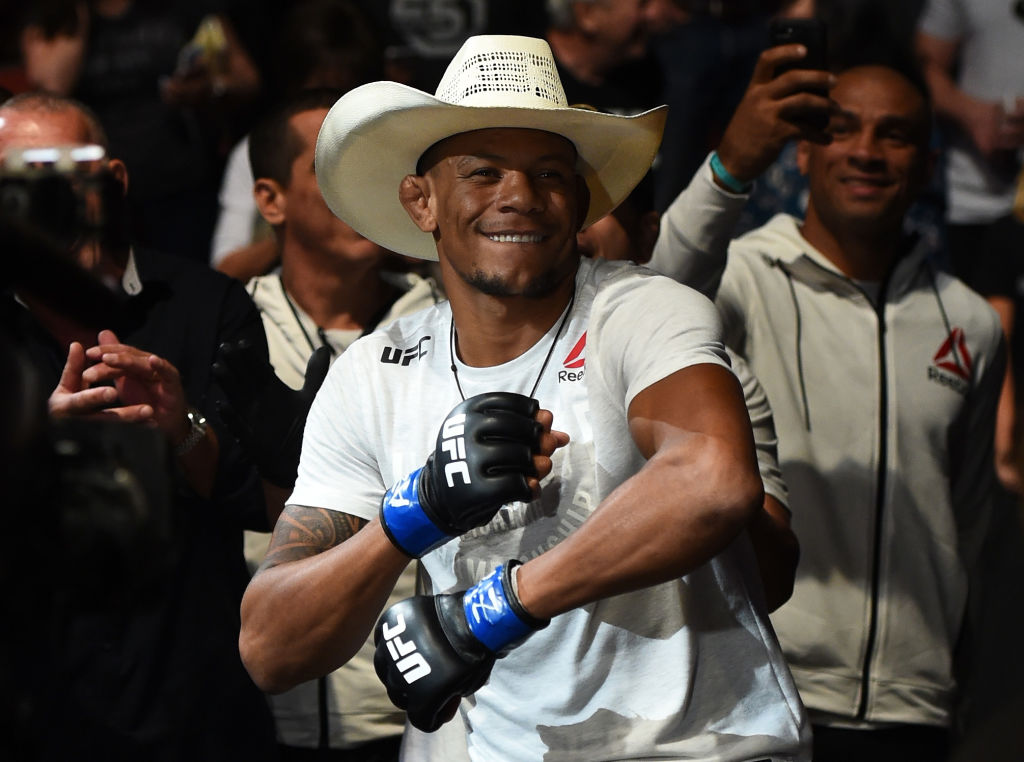 As it turns out, Alex Oliveira shares more than just a nickname with Donald Cerrone.

In addition to sporting the same “Cowboy” moniker, the Brazilian welterweight also has the same mindset when it comes to competing as his American colleague, who got the better of him in a “Battle of the Cowboys” a couple years back in Pittsburgh.

Over the three years and change since Oliveira made his short-notice promotional debut against Gilbert Burns in his hometown of Rio de Janeiro, the 30-year-old has made 11 more appearances inside the Octagon, competing four times in 2015 and 2016 before dialing it back to just three appearances last year.

So far this year, Oliveira has only competed once, registering a second-round submission win over former interim champion Carlos Condit in April.

“If it were up to me, I would fight every single month,” said Oliveira, speaking through a translator, echoing a sentiment that his Albuquerque-based counterpart has espoused many, many times in the past.

“If it were up to me, I would fight four or five times a year. This year, I’ve only been offered two fights and I’m ready for this one.”

That “ready for whomever, whenever” approach is another part of the shared sensibilities between the UFC’s two Cowboys and just as Cerrone has made good on his word many times over by taking on all comers and frequently agreeing to short-notice assignments, so too has Oliveira.

He’s played the role of the late replacement on four occasions, including his bouts with Cerrone and Condit, and this weekend, Oliveira is the one welcoming a new opponent into the Octagon with little advance notice.

Originally booked to square off with Neil Magny, the eighth-ranked American was pulled from the matchup in late August and re-assigned to face Santiago Ponzinibbio in the main event of the promotion’s inaugural show in Buenos Aires, Argentina. Stepping in for the Elevation Fight Team member is Italian welterweight Carlo Pedersoli Jr., who is becoming a frequent short-notice substitute himself after signing on to face Brad Scott in his promotional debut in Liverpool 10 days prior to stepping into the cage.

“I’m ready for everyone,” said Oliveira when asked about the impact shifting from Magny to Pedersoli had on his preparations. “Obviously, it was a short-notice change and I had been preparing for Neil Magny, but it doesn’t change my preparation. I’m ready for everything.” 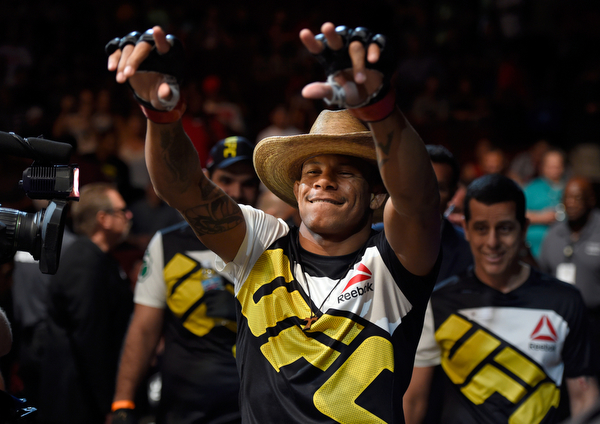 After just breaking into the Top 15 himself with his victory over Condit in April, losing a chance to compete against a Top 10 fixture like Magny could be frustrating or disappointing for Oliveira.

But once again, his thoughts on the subject and his overall approach to what matters most to him inside the cage runs in lock step with Cerrone.

“I’m the 14th-ranked welterweight right now and that is special to me, but I just want to keep making people happy.”

One way he does differ from his American counterpart, however, is that while Cerrone genuinely doesn’t feel any particular way whether he’s fighting in Poland, Singapore or Las Vegas, the opportunity to compete at home in his native Brazil remains special to Oliveira and an experience he can wait to enjoy again this weekend.

“There isn’t anything better than fighting at home,” said Oliveira, who competed in his home country three times in his first four Octagon appearances, but has only fought there once in his last eight outings. “I love hearing the crowd chanting, ‘Uh Vai Morrer!’ It’s an amazing feeling to fight in front of my home crowd, so obviously, it’s still very special to get to do this and I love the opportunity.”

Coming off the biggest win of his career in April and having finally cracked the Top 15 in the deep and competitive welterweight ranks, you would understand if the usually aggressive, all-action fighter opted to ease off a little this weekend and play it a little safe, especially now that he’s facing Pedersoli in a high-risk, low-reward type of matchup.

But that’s just not “The Cowboy Way,” now is it?

“I need to do what I do best, which is put on a show,” he said when asked about balancing his exciting style with his desire to continue making progress up the divisional ladder. “If he wants to fight on the ground, I’ll beat him and if he wants to come and fight, I’ll be ready.

“I just want to make people happy and I will put on a show; that’s what I’m great at.”

Apparently, that’s just what the UFC’s “Cowboys” do.