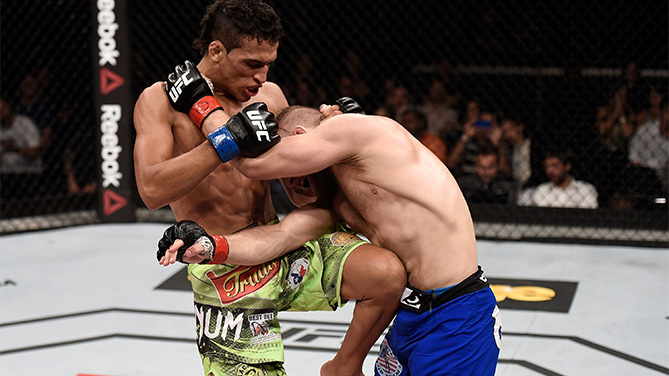 The second time around may have been even better than the first between featherweight contenders Charles Oliveira and Nik Lentz, but on Saturday at Goiania Arena in Goiania, Brazil, there was a definitive result, as the number eight-ranked Oliveira submitted the ninth-ranked Lentz in the third round.

The win was the fourth in a row for Oliveira, who engaged in a Fight of the Night bout at lightweight with Lentz in June of 2011. That match ended in a no contest after Oliveira landed an illegal knee, but there was no controversy in this rematch.

Lentz locked Oliveira up in the opening minute and looked for the body lock takedown, and while he got the fight to the mat, he nearly got caught in a guillotine choke in the process. After fighting free, Lentz tried to set up some ground strikes, but the two wound up standing. Oliveira scored with knees on the inside before breaking, and both proceeded to score with hard shots before another back-and-forth grappling exchange commenced. With under two minutes left, both fighters traded blows, with a knee to the body by Oliveira putting Lentz on the canvas. Lentz survived the initial onslaught of blows and made it to the end of the round.

Having shook off the effects of Oliveira’s late-round attack, Lentz scored a takedown to begin the second frame, and though the Brazilian got to his feet, Lentz slammed his foe once more and the frantic action continued on the mat for the rest of the round.

In the third, it looked like Lentz was going to continue controlling matters, but after Oliveira landed another hard knee, he locked in a tight guillotine choke, and while Lentz resisted as long as he could, he was eventually forced to tap at 1:10 of the final round. 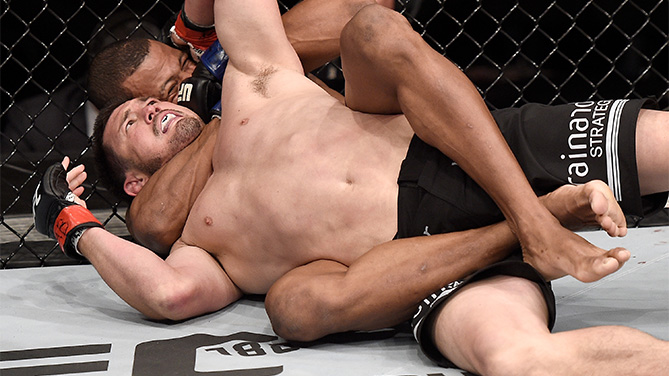 What was expected to be a striking slugfest between welterweights Alex "Cowboy" Oliveira and KJ Noons began as one, but in the end, it was Oliveira’s ground game that led him to the first-round submission victory.

Noons’ boxing was sharp as the bout commenced, but after taking a few hard shots, Rio’s Oliveira locked up with Noons (12-7, 1 NC) and slammed him to the mat three times. After the third trip, Oliveira (11-2-1, 1 NC) pounced, locking in a rear naked choke that forced San Diego’s Noons to tap out at 2:51 of the first round. 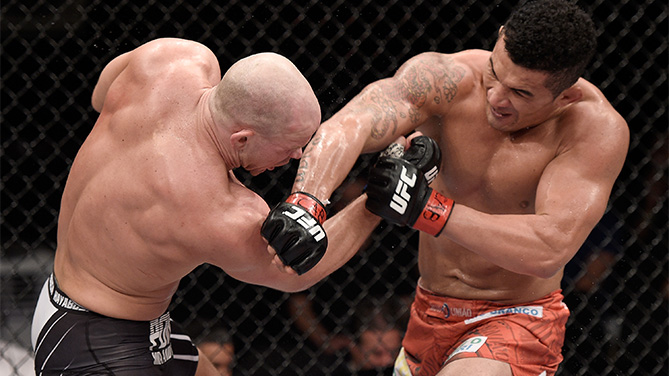 It won’t win any Fight of the Year awards, but Brazilian light heavyweight Francimar Barroso got the job done against Ryan Jimmo, winning a three-round unanimous decision.

Barroso’s control against the cage in the first round nullified Jimmo’s dangerous striking and likely earned him the opening frame. In the second, a flush low kick sent Jimmo to the canvas in pain and brought the Octagonside physician in to check on the Canadian. After a near five-minute break, Jimmo felt well enough to continue, and the bout resumed. For a while, Jimmo was able to keep Barroso at bay with his striking, but the Brazilian still closed strong with some hard strikes and solid clinch work, and nothing changed in round three, with Barroso’s clinch work the clear difference in the fight. 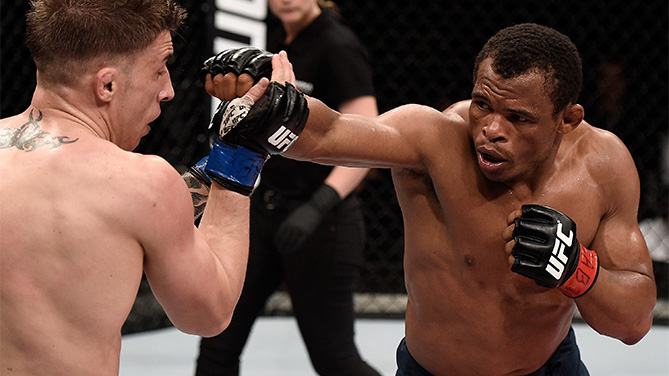 In the first half of the opening round, Trinaldo’s striking game was rock solid, as he whipped out several jabs from the southpaw stance, punctuating them with leg kicks and the occasional looping left hand. Parke moved to the grappling game in the second half of the round, getting Trinaldo to the mat twice while keeping him locked up against the fence as they stood.

Avoiding the canvas in round two, Trinaldo had a dominant five minutes, again peppering Parke with jabs before mixing in more thudding leg kicks that forced the Northern Ireland native to switch stances.

Needing to show a sense of urgency, Parke did just that in the final round, as he got Trinaldo to the mat and then took his back with three minutes left to work. Parke looked for the choke a few times, but in the final minute, Trinaldo escaped and made it back to his feet. Parke would get one more takedown, but his late surge wasn’t enough to pull out the win. 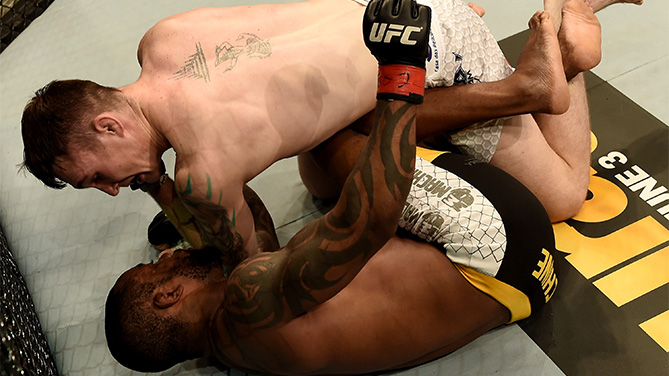 Late replacement Darren Till impressed in his Octagon debut, knocking out Wendell Oliveira in the second round of their welterweight bout.

After eating a couple body kicks at the start of the bout, Oliveira locked up with Till in an effort to take the fight to the mat, but there would be no takedown. After breaking, Till got back to his kick-heavy attack, and he wrapped up the opening round, as the shorter Oliveira wasn’t able to close the gap.

Till opened round two with two takedowns, mixing in some more kicks on the feet while doing so. On the canvas, the 22-year-old Liverpool native held the top position, and with a series of hard elbows, he ended Oliveira’s night, the end coming at the 1:37 mark.

The Santa Catarina, Brazil-based Till, who replaced the injured TJ Waldburger, moves to 13-0 with the win; Rio de Janeiro’s Oliveira falls to 24-9.