Oliveira looking to add marquee name to his resume

In this age of hustling prospects into difficult matchups and passing judgment on them before they’ve accumulated enough fights to form a real opinion about where they stand, Charles Oliveira is an example of giving young talents time to find themselves inside the Octagon.

Make no mistake about it: Oliveira was hustled into the deep end of the talent pool early on in his UFC career, as a rough stretch where he went 2-4 (with one no contest) was made up of losses to Jim Miller, Donald Cerrone, Cub Swanson and Frankie Edgar; veteran talents with infinitely more experience than the energetic Brazilian.

But since then, “Do Bronx” has been given room to breathe and blossom, resulting in the now 26-year-old earning five wins in his last six fights to cement his position as a Top 10 featherweight and carry him into this weekend’s co-main event matchup with Anthony Pettis in Vancouver.

Welcoming the former lightweight champion to the 145-pound weight class is a glorious opportunity for Oliveira to add a marquee name to his resume and take the next step in his career, moving from Top 10 fixture to legitimate title contender, and he has every intention of doing just that.

“I was very happy to fight such a big name,” Oliveira said Wednesday through a translator of the pairing with Pettis. “Everyone keeps talking about his defeats, but if you look at it, he lost to three great champions. He’s a really tough guy, a tough fighter, so I was really happy to get him.”

After starting 2015 with the lightweight title around his waist, Pettis has hit a rough patch, dropping the belt to Rafael Dos Anjos before suffering back-to-back decision losses to current champ Eddie Alvarez and surging Brazilian Edson Barboza. The three-fight skid prompted “Showtime” to pull he trigger on an oft-discussed move to featherweight.
RELATED: Matchup - Oliveira vs Anthony Pettis | Fighter bio

Coming off a first-round finish of Myles Jury last December, Oliveira enters this weekend’s bout with Pettis in the best form of his career, earning victories in five of his last six bouts, with the lone hiccup in that stretch being an injury stoppage loss to Max Holloway last summer in Saskatoon.

In fact, Oliveira is winless in two appearances north of the border, but he doesn’t carry any superstitions about fighting in Canada with him into the cage this weekend; just the confidence that his co-main event assignment opposite Pettis is going to be the catalyst to a move into championship contention. 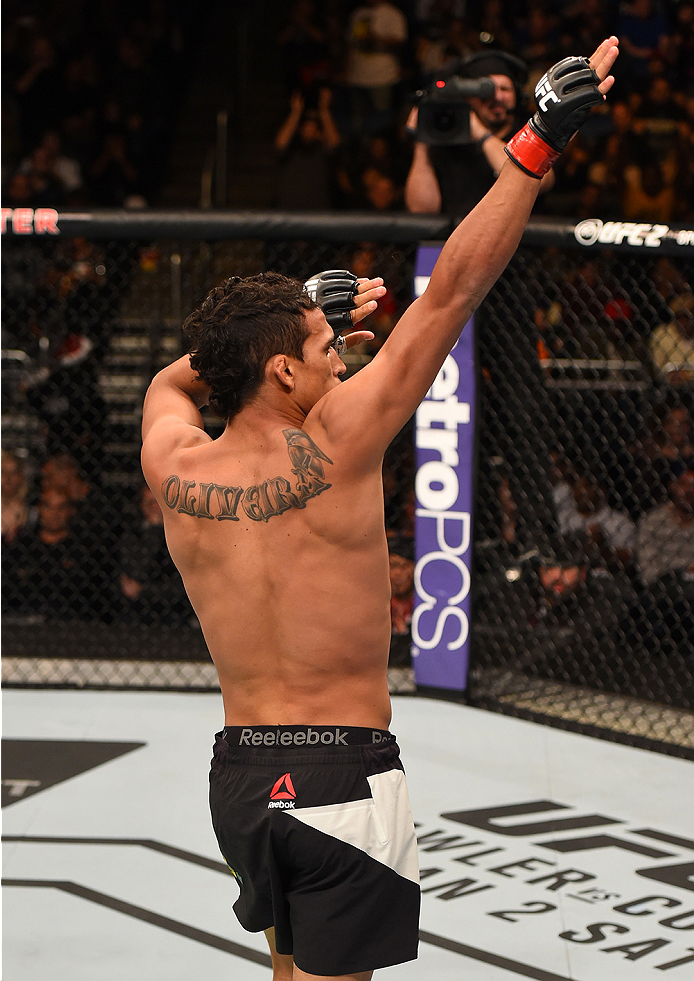 “No, a fight is a fight – anything can happen; it doesn’t matter where you’re at,” Oliveira offered earnestly when asked about his previous setbacks on Canadian soil. “Anything can happen at any time and I have no problem fighting here.

“I don’t even count that defeat,” he added in regards to his loss to Holloway. “It was an injury that happened when I was going in for a takedown. I think this is my moment and my fight against Pettis. This is definitely my time.”

Known for his aggressive striking and constant searches for chokes when the fight hits the canvas, Oliveira is a difficult out for anyone in the division and victories over the likes of Jury and Jeremy Stephens solidify his standing as a one the top talents in the featherweight ranks.

But right now, Oliveira is not considered amongst the elite contenders, a group that currently consists of the five athletes positioned ahead of him in the rankings. New to the division, but boasting a championship pedigree, Pettis is aiming to quickly join that collective with a big win on Saturday, but Oliveira has other ideas.

“What we’ve got to do is what we train for; what our instructor taught us in training and keep our strategy,” he said when asked what it will take to make the former lightweight champion’s featherweight debut an unpleasant experience. “I think we’re going to have a great fight against Pettis.