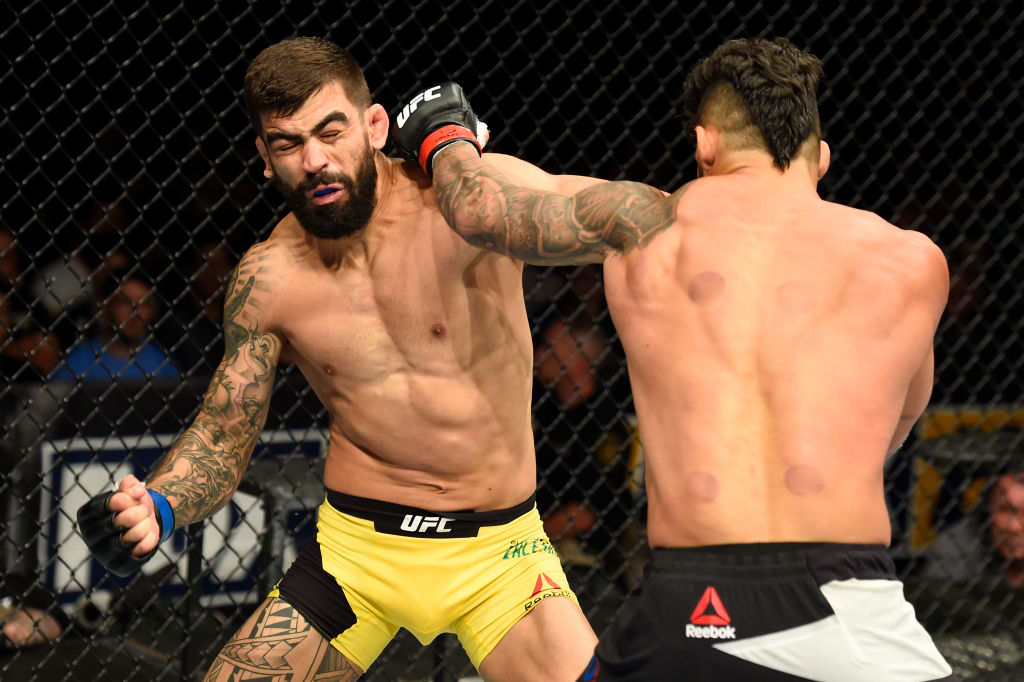 “When you’re out of gas, heart is what makes the difference,” dos Santos said.

There were plenty of hard shots exchanged by Good and dos Santos in the opening frame, with the Brazilian the busier of the two while Good landed the more telling blows, particularly the one that opened a cut over the left eye of “Capoeira.”

Dos Santos continued to throw bombs in the second round, but Good took them all without flinching. Meanwhile, Good’s shots were coming less frequently, but they were taking a toll as the round progressed. Dos Santos did momentarily rock Good with a right hand in the final two minutes of the round, but he New Yorker just tapped his chin and asked for more. He got it in the form of a flying knee, and it was dos Santos’ busy attack that may have won him the round.

The third was a repeat of the previous two rounds in terms of gritty back-and-forth action, and while much of the frame was tough to call, dos Santos rocked Good in the closing minute, which may have been enough for him to win the round.

Eryk Anders made a spectacular arrival to the UFC, knocking out veteran middleweight Rafael Natal in the first round.

Taking the fight on short notice, replacing the injured Tim Williams, the former University of Alabama linebacker looked cool, calm and collected in the biggest fight of his life, as he dodged the wild swings of Natal and waited for his opening to pounce. After a wild sequence in which Natal rushed face-first into the fence, the bout went to the mat and Anders began to open up with his strikes. Moments later, the two stood and Anders lowered the boom, with a left hand sending Natal to the canvas. Referee Keith Peterson then intervened at the 2:54 mark.

Miss any of the prelims from Fight Night Long Island? Watch them now on Fight Pass! 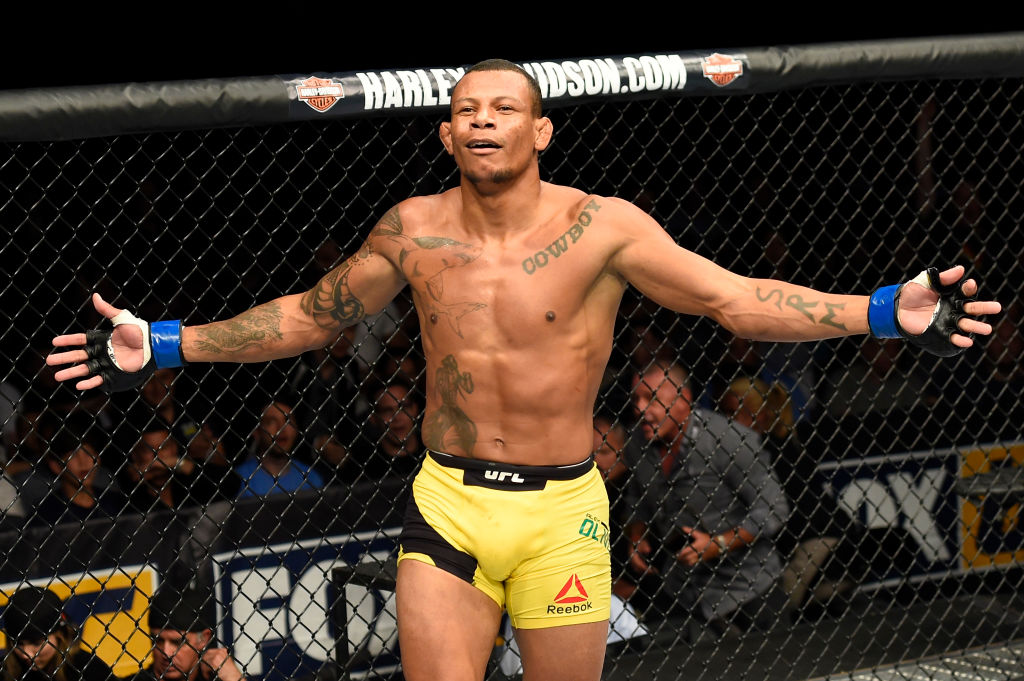 Brazil’s Alex Oliveira rebounded from a tough first round against Farmingdale’s Ryan LaFlare, and once he was able to keep the welterweight fight standing, he lowered the boom with a walk-off second-round knockout victory.

LaFlare struck first, slamming Oliveira to the mat early in the opening round, and while “Cowboy” tried to scramble out of trouble, LaFlare was able to keep him grounded for the rest of the round.

Oliveira saw some daylight in round two, and he began tagging LaFlare with hard shots, one of which bloodied the Long Islander’s nose. That was soon to be the least of LaFlare’s troubles, as the Brazilian landed a flush right hand as LaFlare rushed in, sending him face first to the mat and bringing in referee John McCarthy to stop the fight at the 1:50 mark as Oliveira walked away. 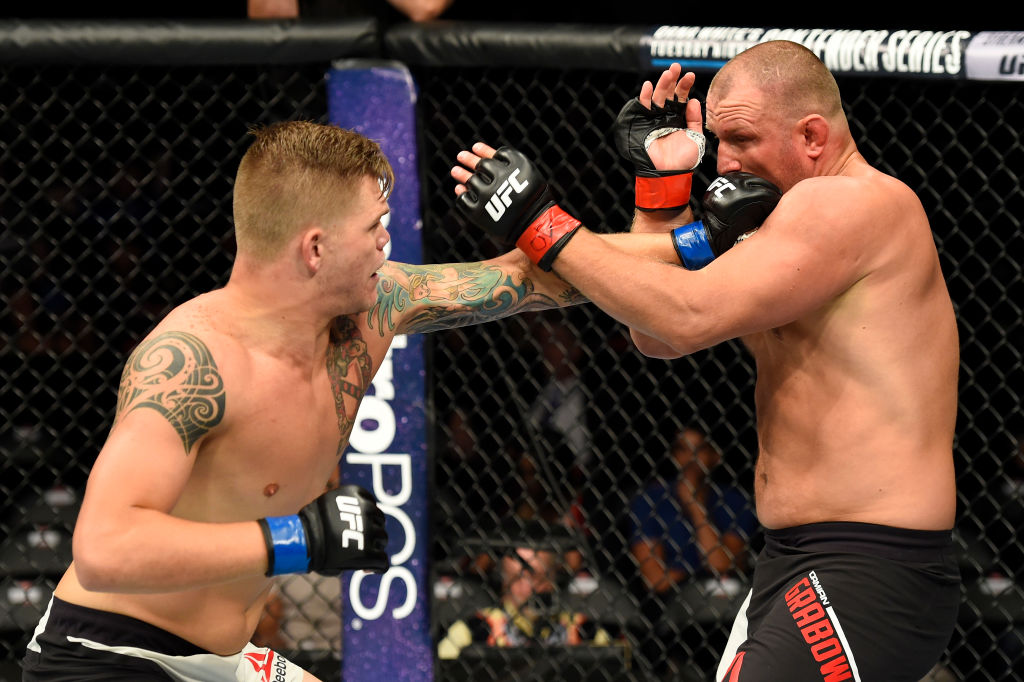 Chase Sherman picked up his second consecutive win in heavyweight action, as he scored a shutout three-round decision over Poland’s Damian Grabowski.

The fighters fought at a steady pace in the opening round, Sherman holding the edge for much of the round until a late flurry widened the gap between him and Grabowski (20-5).

The second was another close one until the final minute, when Sherman picked up his work rate and finished strong.

Fatigue set in for round three, leaving both heavyweights to deal out offense in sporadic bursts, and in that showdown, it was Sherman (11-3) once again holding the edge, allowing him to take the bout by scores of 30-27 twice and 30-26. 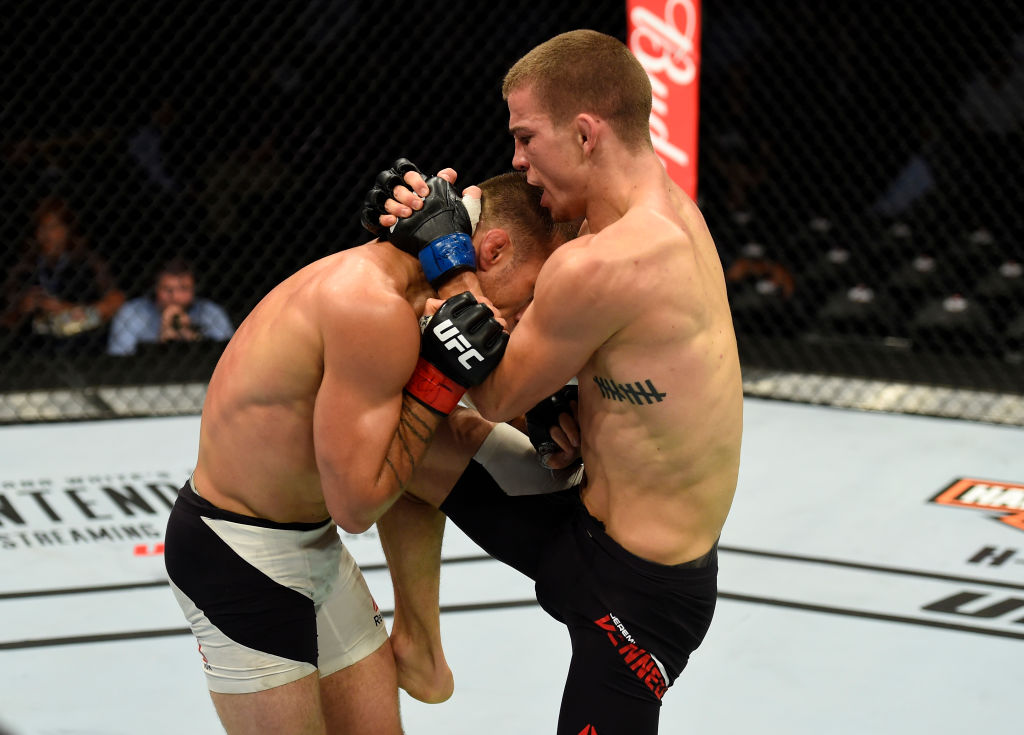 The grappling of featherweight prospect Jeremy Kennedy was too much for Kyle Bochniak, allowing the British Columbia native to win a three-round unanimous decision victory.

Kennedy dumped Bochniak to the mat as soon as the fight began and he kept him there until the Boston product made it to his feet with less than two minutes to go. Once separated, Kennedy kept the pressure on, landing some hard knees in the clinch before scoring another takedown. This time, Bochniak was kept grounded until the end of the round.

Bochniak (7-2) got off some strikes to start round two, but then it was back to the mat, where he was unable to break Kennedy’s grip until 1:20 was left in the round. But the break was brief, as the Canadian put Bochniak on the mat once more before the horn sounded.

The New Englander finally had some room to operate in round three, but after a strong start to the final frame on the feet, Kennedy secured another takedown with less than two minutes left that sealed the deal on the fight for “JBC,” who improves to 11-0 with the win. 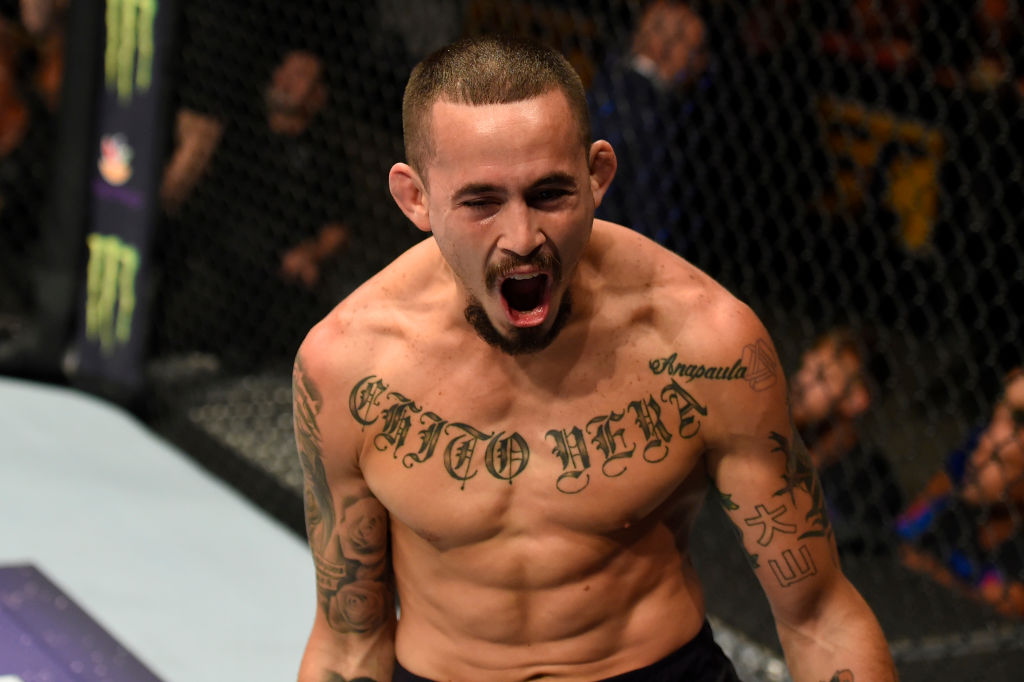 Marlon Vera made it two for two in spoiling homecomings, as he followed up his win over Brad Pickett in London earlier this year with a submission victory over Selden’s Brian Kelleher in Long Island.

After a brief feeling out process, the two bantamweights locked up and looked to gain an advanyage. Vera quickly took an arm, and while Kelleher fought to get free as the two hit the mat, “Chito” wasn’t letting go, and as soon as he locked in the armbar, that was it for Kelleher, who was forced to tap out at 2:18 of the first round. 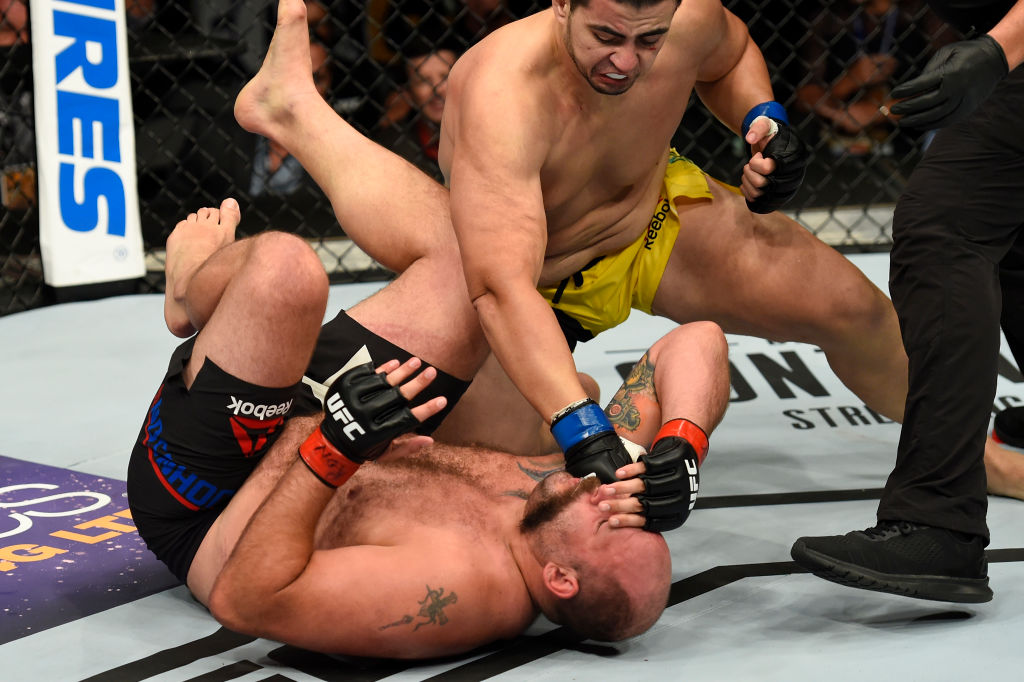 Brazilian heavyweight Junior Albini made a spectacular UFC debut, knocking out No. 12-ranked contender Tim Johnson in the first round.

Johnson looked to getting off to a great start at range and in the clinch, as he controlled the action early on. But after the two broke from the fence, Albini fired off a solid combination that saw him land a knee to the body followed by a left and a right that sent Johnson tumbling to the canvas, with referee John McCarthy jumping in to stop the bout at the 2:51 mark of the first round. 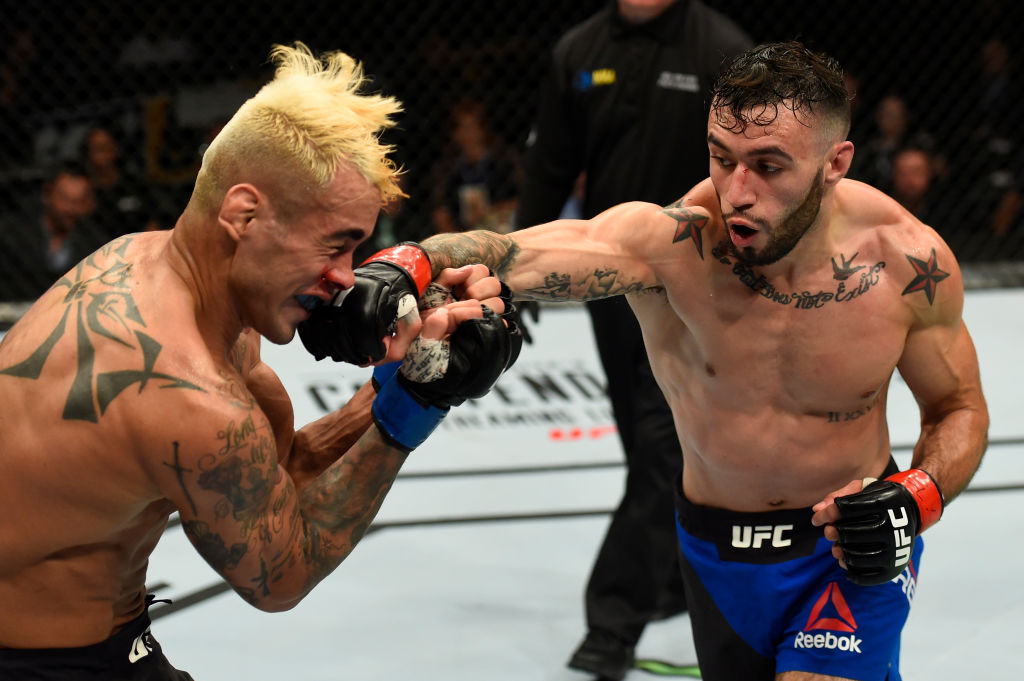 Burgos stalked Pepey as if the Brazilian couldn’t hurt him, and it appeared that he couldn’t in the opening five minutes, despite doing his best to catch the New Yorker with flashy punches and kicks. In response, Burgos stuck to the basics and it resulted in two knockdowns that made it a big round for him.

The action kept heating up in round two, with Pepey’s attempts to draw Burgos into a ground fight coming up empty until the closing seconds, when it was Burgos still controlling the sequence thanks to some hard ground strikes. Before then, there were some heated exchanges where both fighters got in shots on each other.

After a wild exchange to begin the final frame, Burgos settled down and used his left hand to control Pepey, first with a jackhammer jab and then with a body shot that dropped his opponent with less than a minute to go. Pepey rose, but as they tumbled to the mat in the closing seconds, Burgos put a cap on his win with a series of ground strikes. 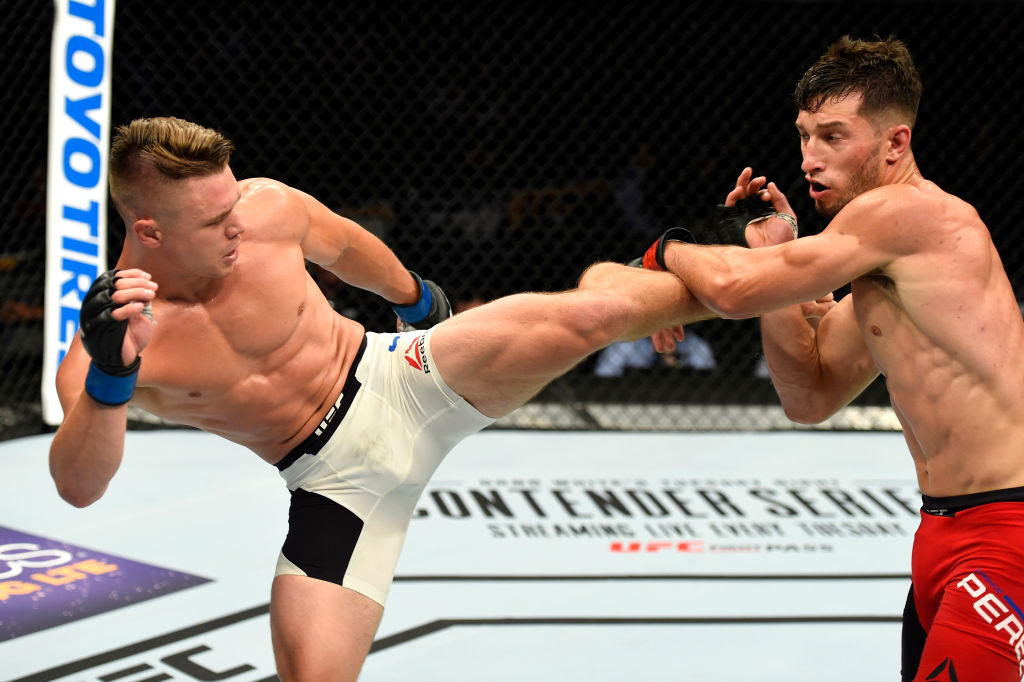 Islip’s Chris Wade thrilled his home fans in the lightweight opener, as he repeated a 2014 win over Frankie Perez, defeating the New Jersey native via unanimous decision.

With a raucous crowd already in their seats and cheering them on, Perez and Wade got right down to business, both battling back and forth against the fence on the mat. Wade held the edge early and late, but in the middle of the round, it was Perez who got on the board with his grappling and some well-placed knees.

After continuing the competitive action on the feet during the first half of round two, Wade got the bout to the mat and surged ahead in the final 2:30.

Perez had some success with his striking early in the final round, but a takedown attempt led to a scramble that saw Wade land in the top position and stay there until the final minute, when Perez got loose and was able to land a hard knee before the two locked up once more.