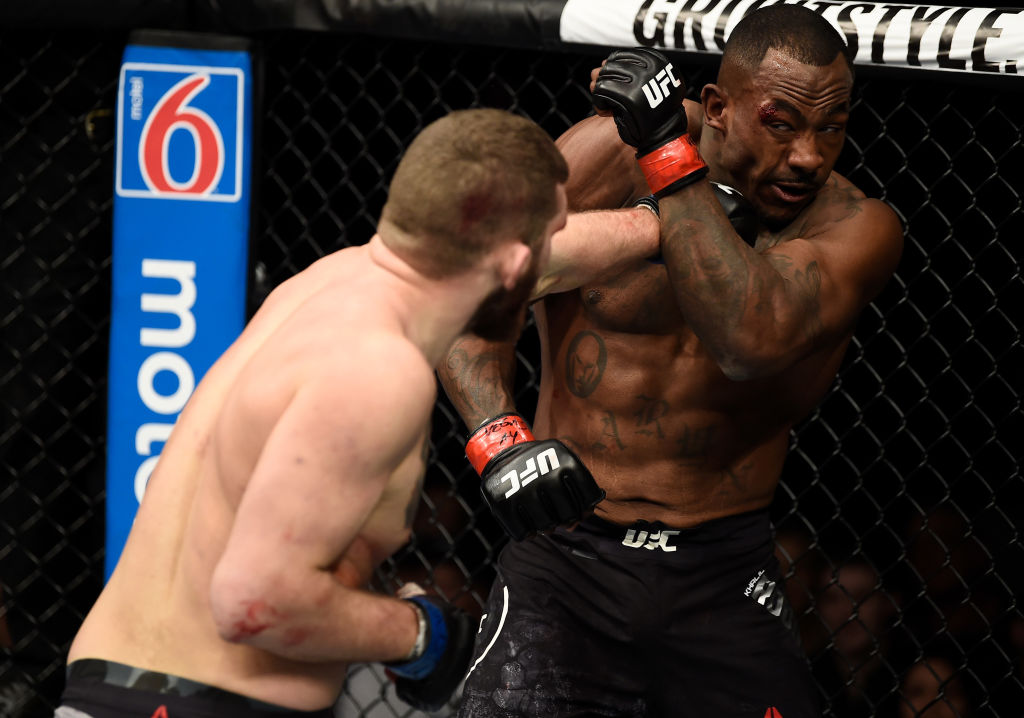 Polish light heavyweight Michal Oleksiejczuk’s UFC debut may have been delayed from November, but once he stepped into the Octagon at T-Mobile Arena in Las Vegas Saturday, he made the most of his opportunity, winning a shutout three-round decision over Khalil Rountree Jr.

After eating some thudding shots and getting cut over the right eye early on but rebounding with a takedown, Oleksiejczuk’s toughness was evident. And though Rountree was setting a ferocious pace and piling up points, Oleksiejczuk refused to stop throwing and marching forward, setting up an interesting second round cardio wise for the Las Vegan.

Rountree started fast again in round two, but he slowed down rapidly, allowing Oleksiejczuk to keep pecking away with his kicks and punches upstairs and down, draining Rountree’s gas tank even further. He had enough left for a strong start in the third, but Oleksiejczuk adjusted by scoring a takedown and doing good work on the mat, keeping his foe grounded until the final horn.

Jury got off to a fast start in the first round, controlling the standup behind a crisp attack punctuated by several hard kicks to the body that kept Glenn from getting any sort of rhythm.

Glenn tried to put his clinch game into action in round two, but Jury was still able to adjust, allowing him to put the bout on the mat with two minutes remaining. There, Jury stayed in control, capping off another round for the Michigan native.

Glenn had some success in the third, but not enough to cause Jury any serious difficulty, and by the end of three rounds, there was no question that the decision was going to Jury, who improves to 17-2 with the win. Glenn falls to 20-5-1.

A majority draw verdict was rendered in middleweight action between Marvin Vettori and Omari Akhmedov.

Neither fighter shied away from exchanges in the opening round, and while Vettori (12-3-1) held the edge early and late, in the middle of the frame it was Akhmedov (17-4-1) landing with several hard bombs.

Akhmedov began firing hard kicks to the leg to begin round two, talking to the Italian as he did it. Vettori responded by taking the fight to the mat as he sought a triangle choke, but Akhmedov remained cool as he got loose. With nearly two minutes gone, the two rose, and while Akhmedov was the busier of the two, his face began showing the wear of battle heading into round three.

Vettori ripped off a extended combination of punches early in round three, looking to press ahead, but Akhmedov wouldn’t go away. Soon, it was “Wolverine” firing back with his power shots, and Vettori responded, neither trying to leave the fight with the judges. With a minute left, Akhmedov sought a takedown, but Vettori ended up on top, and the prospect fired off a series of ground strikes to cap off a solid 15-minute effort from both men that was ultimately ruled a draw.

Brazilian flyweight Matheus Nicolau had a breakout performance in his third UFC bout, winning a shutout unanimous decision over No. 13-ranked Louis Smolka. 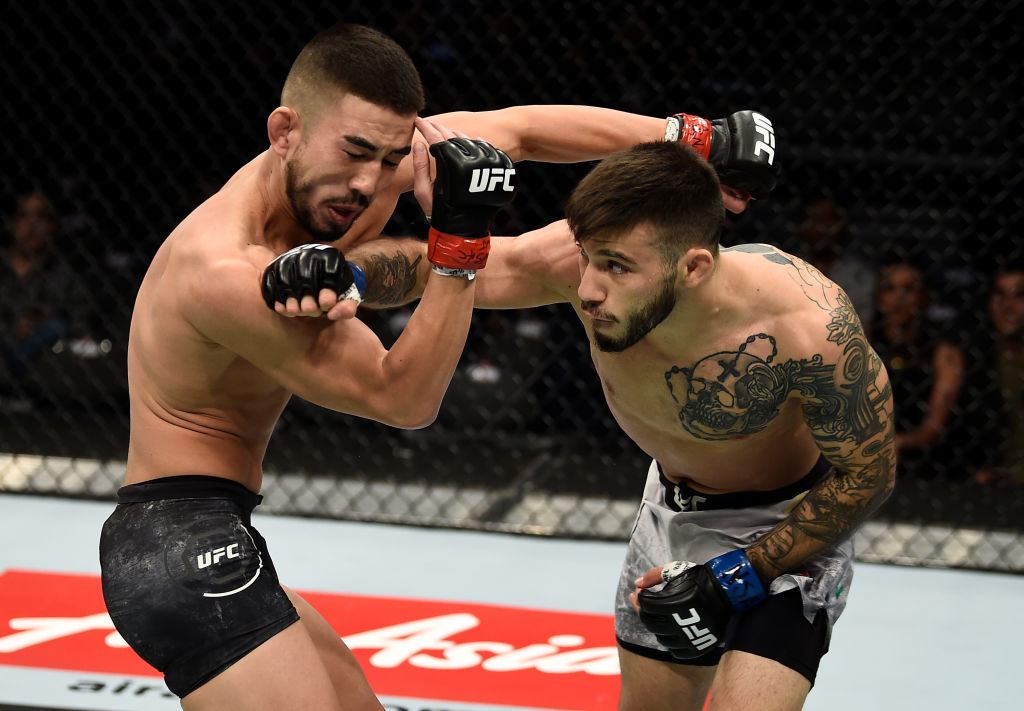 second minute, but the Hawaiian recovered quickly and got back to his feet. Yet with a little over two minutes remaining, a right-left sent Smolka down again. This time, Nicolau looked for an arm triangle choke, but Smolka got loose and stood up. Nicolau’s pressure was relentless, though, and he scored another knockdown just before the horn ending the round.

The now bloodied Smolka got back in the fight in round two, but Nicolau’s faster, accurate blows continued to keep him ahead in the middle five minutes, even though his work rate was slowing down.

Nicolau switched things up in round three with two takedowns, and while a late choke attempt by the Brazilian appeared tight, he still had put enough in the bank to take the victory by scores of 30-26 twice and 30-25.

Flyweight contender Tim Elliott made a momentary move back to bantamweight for the UFC 219 opener, submitting previously unbeaten Mark De La Rosa in the second round.

Elliott put the fight on the mat in the first 30 seconds, but De La Rosa wasn’t bothered, as he attempted a guillotine choke and armbar on the veteran, who was able to slam his way out of trouble. The always busy Elliott then went to work with a varied number of attacks, including a late guillotine attempt in the final minute.

The fight went right back to the mat to start round two, and this time, Elliott closed the show, catching De La Rosa in an anaconda choke in a scramble that forced a tap out at 1:41 of the second stanza.