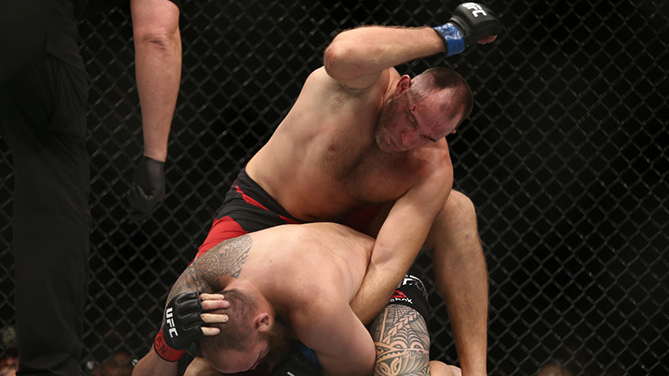 Both are true statements, but they don’t exactly give you the full picture of just how impressive what each man does really is in the context of their respective professional pursuits.

Where Patterson cranks out new entries in the Alex Cross, Michael Bennett and Women’s Murder Club series at an incredible rate, Oleinik piles up finishes on the ground, having earned 44 of his 56 career victories by submission. An International Master of Sport in Combat Sambo and a fourth-degree black belt in Brazilian jiu-jitsu, Oleinik is as dangerous as they come on the canvas and befitting the nickname “The Boa Constrictor.”

“That is my technique. I will try chokes from any position, for any guys, no matter where I stay,” says Oleinik, who takes on Mark Hunt in the main event of Saturday’s UFC Fight Night event at the Olympic Stadium in Moscow, the organization’s first ever event in Russia. “If I stand, if I’m on the ground, left, right, back – I have submissions and chokes.”

HOW BOUT IT⁉️@OleynikUFC can end the fight on ANY punch. #UFCMoscow pic.twitter.com/cHczDmy6QS
— UFC (@ufc) September 12, 2018

Just over two minutes into the contest, Oleinik locked Hamilton up in a judo scarf-hold headlock – kesa gatame – to earn his 52nd career win and showcase his prowess on the canvas to the UFC audience for the first time.

But it has been his introduction of the Ezekiel choke into the Octagon that has garnered Oleinik a ton of attention and acclaim in the time since he first pulled off the previously unseen maneuver.

Traditionally a hold that is completed using the sleeve of your gi to choke your opponent, Oleinik has mastered a no-gi application of the move, becoming the first man to successfully use the hold to earn a victory in the UFC when he submitted Viktor Pesta in January 2017.

Part of what makes it such a unique and impressive hold is that Oleinik completes it off the bottom and actually has to either give up takedowns or pull guard in order to put himself in a position to complete the choke. If you don’t know what you’re watching for at home, it can look as is the Russian veteran is being taken down and put in a bad position, as was the case with Pesta, who seamlessly floated into mount midway through his bout with Oleinik, completely unaware that he made a crucial mistake.

Seconds later, “The Boa Constrictor” squeezed out a tap, much to the surprise of Jon Anik and Daniel Cormier on the call. Then this past May, he did it again, this time catching Junior Albini.

While it has become his signature hold and everyone watching at home is now prepared to see him attack with it whenever his fights hit the canvas, Oleinik doesn’t believe he’ll have an opportunity to use the move this weekend when he shares the cage with Hunt in Moscow.

Though he does have something else he’s been working on for Saturday night instead.

“In my opinion, I can’t do this choke on Mark Hunt,” said Oleinik, who has amassed an incredible 56-11-1 record over the course of his nearly 18-year career. “Mark Hunt has a very short neck. I think it will be impossible with this fight, but I have something special for Mark. God help me, I will try to show you this surprise. I have one more submission.”

For Oleinik, this weekend’s fight card represents the first time he has headlined a UFC event and after nearly 70 professional fights, it’s an accomplishment that still carries great meaning for the seasoned veteran, who takes a very business-like approach to his craft, with a little self-deprecating wit sprinkled in for good measure.

“I’m honored for this fight,” he says of the opportunity to headline the UFC’s inaugural show in his home country. “This is a very famous opponent, he’s a very tough guy and I’m very happy for this fight.

“But his is just a pro fight,” he adds. “Mark Hunt was always a legend in MMA, but Mirko Filipovic is also a legend in MMA. Other UFC fighters like Travis Browne and other guys are famous too. UFC is the top league and all fighters from UFC are very tough guys and Mark Hunt is one of those guys.”

And just as he’s very matter of fact about his career and his skills, so too is Oleinik when it comes to assessing how things will play out when he steps into the Octagon with “The Super Samoan” this weekend.

“I think Mark Hunt has something special for me, but I have something special for him,” he says with a laugh. “We have presents for each other and I think it’s 50/50. It’s two experienced guys – one (high-level) striking fighter and one not bad grappler – who will come to the Octagon and start a fight.

“It might be a very good fight; this is my hope.”

It will be. You can be sure of that.