Don't miss Fight Night Newark this Saturday night live and free on FOX. Rockhold vs. Machida is the main event of a jam-packed fight card in New Jersey. 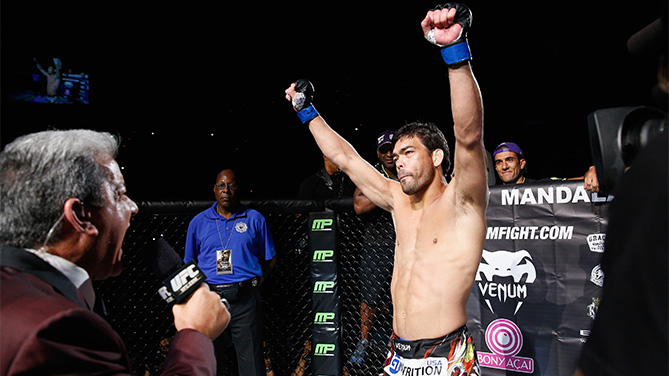 Lyoto Machida knows that age is slowly creeping up on him, that he’s 36, not 26. But it’s the reason he trains harder, longer. It’s why he’s cautious about his diet, why he seldom takes time off between fights, why his experience is his best weapon.

When he steps into the Octagon Saturday night to face Luke Rockhold at UFC Fight Night in Newark, N.J., Machida will bring 12 years, 27 bouts, 69 rounds and enough savvy to fill a how-to book on MMA. If experience is the best teacher, Machida is a professor.

And he’s not done, not by any stretch. 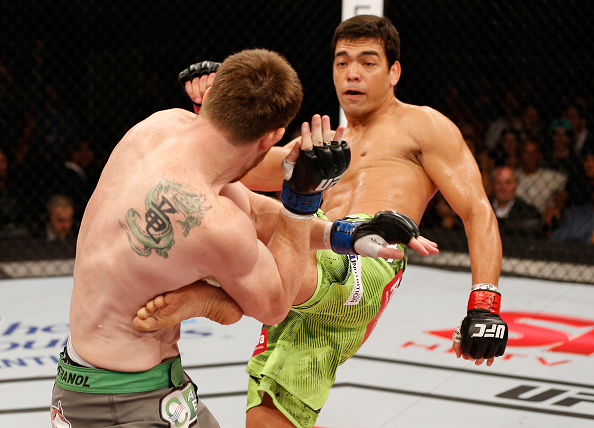 “I never stopped training in my life, not since I was four years old,” Machida said last week. “I’m a real martial arts fighter. I’m a real athlete. I think about my food, my diet, my health. But I can still do much more.”

As a former light heavyweight champion, Machida can become only the third UFC fighter to hold titles in two weight classes, joining B.J. Penn and Randy Couture. But he will have to weave through a crowded middleweight class to get there.

The champion, Chris Weidman, defended his title with a unanimous decision over Machida at UFC 175 and faces Vitor Belfort on May 23 for the belt. Jacare Souza, the No. 1 contender, meets Chris Camozzi on the Machida-Rockhold card and will have something to say about the next shot at the title.
> READ: Luke Rockhold Sees His Life Choice: Surf Through Life Or Bust Through It?

That makes Saturday’s fight critically important to Machida, who risks sliding down the rankings if he should lose.

Opponents may well view him as a prime target, someone who would enhance their career and their record if they can somehow defeat him, but it hasn’t happened. 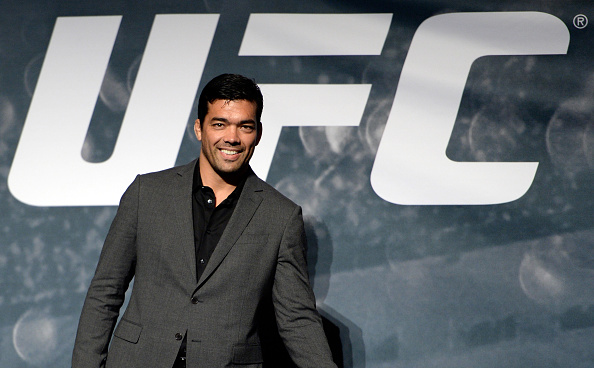 C.B. Dollaway hoped to use Machida as an entrée to the top of the division when they fought in December, but their fight lasted one minute. Machida dropped Dollaway with a leg kick to the rib cage, and Dollaway never got up.

Rockhold, ranked No. 4 among middleweights, could springboard over Machida with a win.

“Lyoto is a guy that’s always hovering around the top of the division,” Ed Soares, Machida’s manager, said. “He’s the former light heavyweight champion, he’s fought a few times for the title, he fought once for the middleweight title. Neither of these guys (Dollaway or Rockhold) has fought for a UFC title, so beating a guy like Lyoto Machida would definitely add to their resume. If they win, they beat Machida, and if they lose, they’re not the first.”
> WATCH: Why I Fight - Lyoto Machida

Machida (22-5 overall, 3-1 as a middleweight) knows this. He also knows that his experience and wisdom give him an edge that few others possess.

He trains every day. He watches video. He thinks ahead of his foes in the Octagon in the same way a chess master anticipates moves long before they happen. It comes with experience. 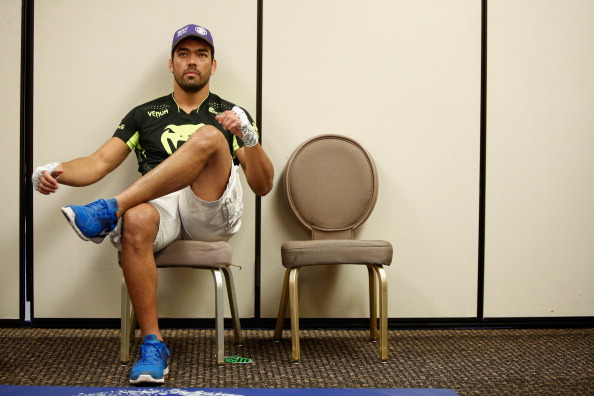 “I don’t think, I feel,” he corrects. “I can feel what my opponent wants to do. A little bit in advance I can foresee some movements. I can see certain tendencies that they’re trying to do.

“I have to be smarter. I have to see my opponents, study my opponents. I have many fights under my belt, and I’m a very experienced fighter. It makes me very comfortable when I’m in the Octagon. Even in my training I have to train smart, not hard.”

Chinzo Machida, Lyoto’s lead trainer and older brother, said a desire to keep evolving and learning new things has kept their sessions fresh. Lyoto, who will turn 37 years old next month, is not one to sit back and be content.

“I’ve seen him evolve quite a bit,” Chinzo said through a translator. “Our family comes from sport karate, so from his first fights it has evolved into a karate that’s efficient in mixed martial arts. I’ve seen him evolve in other aspects of the game such as jiu jitsu and wrestling. His ground game has developed too and now he’s a complete fighter.
> WATCH: Free Fight - Machida vs. Ryan Bader

“But there’s still a lot Lyoto can learn. He’s a very focused guy who is open to learning new techniques and bettering himself as a fighter and a complete martial artist.” 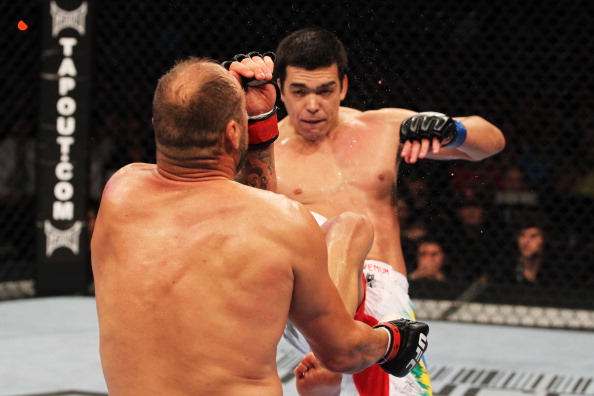 Even so, karate remains the foundation of Machida’s art. It’s something he embraces fully, whether it’s bowing toward his opponent when he enters the Octagon or speaking respectfully at all times.

He won’t talk about Rockhold’s weaknesses because he knows it can be interpreted as disparaging, so all he says is, “I think he’s a complete fighter, a well-rounded fighter. He can do the stand-up game and the ground game. I can’t underestimate him.”

Machida was discouraged when fellow Brazilian Belfort turned down a fight with him for the interim belt after Weidman was injured in January, but he didn’t criticize Belfort or complain that he was losing a precious title shot.

“Not at all,” Machida said. “He had his own reasons not to accept that fight, and I respect that.”

In fact, with the fight less than a month away, Belfort didn’t feel comfortable changing his preparation from Weidman, a more conventional fighter and wrestler, to Machida, a southpaw and karate specialist. 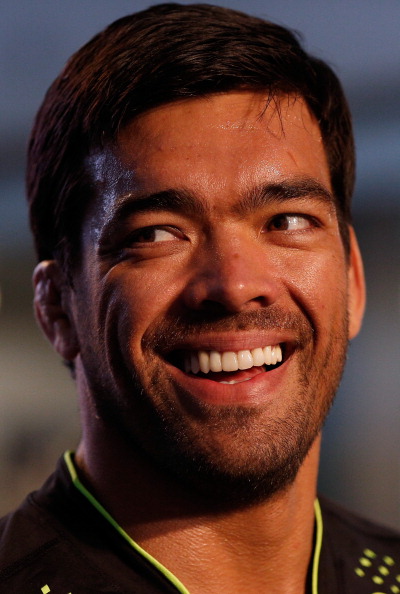 “Lyoto felt that Vitor had earned the right to make that choice,” Soares said. “Lyoto was upset because of course he wanted to fight for the title, but he respects and understands why Vitor didn’t take it.”

Machida’s respect for the sport is why he didn’t particularly care for Conor McGregor’s outbursts and trash talking during his recent world tour to promote his featherweight title fight with Jose Aldo, but he won’t criticize McGregor.

“It’s not my style,” he said. “I respect his style, I respect how he promotes the fight, but I like to be a very polite guy, respect my opponents. I came from very traditional martial arts, from karate, and in karate you have to respect your opponent. It doesn’t matter if he’s a doctor or if he’s homeless. I have to respect him as a person, not just because he’s a fighter.

“But I don’t criticize McGregor because I know he’s trying to promote the fight and he has his own style to promote it.”

Machida’s quiet way has worked well for him. His rare time away from the gym is spent with his wife and two sons, ages 6 and 4, and his sole focus is on training so that he can get back to the top. He takes care of his body, doesn’t smoke or drink and intends to fight into his 40s.

“Because of the way he fights and the style he fights, Lyoto doesn’t take much damage,” Chinzo Machida said. “He’s a very technical fighter, so if he keeps fighting that way, he can fight another four or five years.”

Beating Rockhold on Saturday night will be a big step forward.