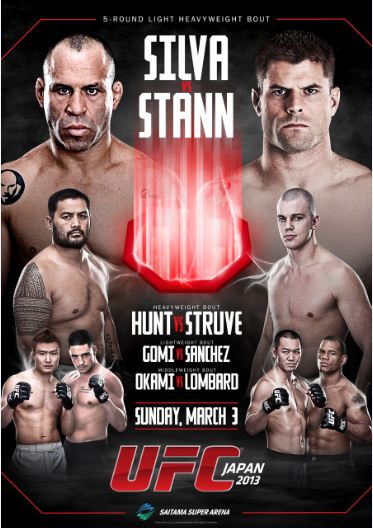 Okami (29-7-0) holds wins over several UFC veterans, including UFC middleweight champion Anderson Silva, who he defeated via disqualification in 2006. Lombard and Okami, both coming off dominant wins in December, continue their run toward the middleweight title. Lombard (32-3-1), a Cuban-Australian mixed martial artist and former Olympic judoka, has a 4th degree black belt in Judo and is known for his vicious power punching.

Also announced on the main card will be an intense featherweight bout between Rani Yahya and Mizuto Hirota. Hirota (14-5-1), who has never been knocked out in his career, is a veteran of the Sengoku and DEEP organizations in Asia. Prior to his North America debut in STRIKEFORCE last July, he was 4-1 in his past five fights. Brazilian Yahya (17-7) has won all but two of his fights by way of submission and holds notable wins over Mark Hominick and Eddie Wineland.

In a five-round, light heavyweight main event matchup, former PRIDE® middleweight champion Wanderlei Silva will step into the Octagon® against top contender and decorated U.S. Marine Brian Stann. Brazilian fighter Silva, nicknamed “The Axe Murderer,” is known for his aggressive fighting style with the majority of his fights ending in knockout or referee stoppage due to strikes. He holds the records for the most wins, knockouts and title defenses, and longest winning streak in PRIDE history. This will be Silva’s first fight in Japan since 2006. Stann, born at the Yokota Air Base in Tokyo, owns a Silver Star for combat in the Marine Corps. The veteran has already accomplished some impressive feats that include winning the WEC® light heavyweight title and defeating Chris Leben, Jorge Santiago and Alessio Sakara.

In the co-main event, contenders Stefan “Skyscraper” Struve and Mark Hunt face off in a hard-hitting UFC heavyweight bout. Making his long-awaited Japan debut, Struve, the tallest fighter in UFC history at seven foot, has won four in a row, with two Submission of the Night and one Fight of the Night awards. Hunt has long been one of the most popular fighters ever to compete in Japan because of his warrior spirit and knockout power. Hunt is on a three-fight winning streak and last fought at UFC 144 in Japan in February 2012, winning via knockout over Cheick Kongo.

Other fights on the card include Japan’s own Riki Fukuda facing off against Brad Tavares at middleweight, Japanese bantamweight Takeya Mizugaki vs. Bryan Caraway, and the UFC debut’s of two Koreans, welterweight Hyun Gyu Lim and bantamweight Kyung Ho Kang, taking on Marcelo Guimaraes and Alex “Bruce Leeroy” Caceres, respectively.

Also making his debut is Japan’s Kazuki Tokudome who will take on Cristiano Marcello in a lightweight matchup.

The regular on sale date for the general public is will be January 12th. UFC Mobile subscribers and users of Ticket Board, an online ticketing site focused on major entertainment and sports, will have the opportunity to purchase tickets through http://ufcm.jp/pc/index.html and http://tickebo.jp respectively. Readers of E-Plus, a play-guide publication circulated at 8,649 Family Mart convenience stores in Japan, may purchase tickets online at http://eplus.jp/sys/web/sports/battle/index.html.