Ogle Ready for a Dogfight with Miller

"I’ve been solely focusing on embracing the grind and smashing it and
really training hard. I’m hoping when I fight it will show." - Andy Ogle 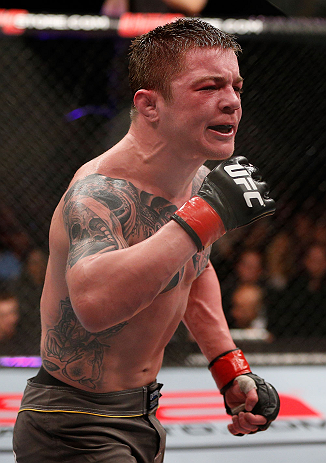 We won’t say that Andy Ogle has given up on his New Year’s resolution to read one book a week throughout 2013. Let’s just call it a hiatus for the British featherweight, who does have a good reason for putting the books down for the moment: a Saturday bout with veteran Cole Miller in Manchester.

“Once I found out I had this fight, I’ve been too tired to read,” laughs the 24-year-old, whose most recent literary conquest was Stephen King’s The Stand. “I’ve been solely focusing on embracing the grind and smashing it and really training hard. I’m hoping when I fight it will show.”

It’s been a long wait for “The Little Axe,” who was unable to follow up his first UFC win over Josh Grispi in February due to an injury that scrapped him from an August meeting with hot prospect Conor McGregor. Needless to say, when the fight was pulled from the first UFC card on FOX Sports 1, Ogle caught some heat from fans of the “Notorious” one.

“It was frustrating because I knew exactly what some people would say,” said Ogle. “He (McGregor) is a good fighter and he’s got great fans behind him and great support. He’s the new Irish hope and I knew that people would talk smack and say things. I think people forget that it’s your life, and when they’re saying stuff like that, it can annoy you and hurt you. You’ve got to take it on the shoulder and not take it to the heart, and they’re supporters of him, they’re not haters of you. But it doesn’t make it any easier when you work so hard for the fight and it gets taken away through injury. Mentally you want it, but physically, you can’t have it, so it’s tough.”

Call it the education of Andy Ogle, fighting version. Unable to compete on the Ultimate Fighter 15 finale show due to being on medical suspension for his loss on the show to Al Iaquinta, Ogle eventually got his Octagon shot in September of 2012 but wound up losing a controversial decision to Akira Corassani. He would get his UFC win via decision over Grispi earlier this year, but when you ask him about it, he has an interesting take on his first victory in the organization.

“It was great getting my second UFC win,” he deadpans. “It was fantastic. It was great because it was my birthday; that was the icing on the cake. I feel great going 2-0 in the UFC, and I think it will be great going 3-0. I can’t wait and can’t wait to see what the next challenge is after this.”

To many observers, Ogle is right on target with his assessment of the Corassani fight, but on his record, it still remains a loss, only his second in 11 fights. He doesn’t want to be on the short end of the win-loss equation again, but he does have quite a hill to climb in the veteran Miller, whose recent UFC run at featherweight has only resulted in a 1-3 record. Ogle chalks that up to his 6-foot-1 foe being too big for the weight class.

“If he’s at 145, maybe I should do 135 and cut my ears and my toes off, maybe a limb or something,” he said. “I’ve got to believe that (the weight cut) is gonna affect him in a major way and that’s gotta hurt.”

Not that that’s an immediate concern for the Newcastle native, who will take any advantage he can get on fight night, especially since a win will elevate his status in the featherweight division considerably. And in some ways, a win over Miller would be worth even more than one over McGregor, because while beating the Irishman would have probably resulted in fans saying he was overhyped, beating an established vet like Miller would produce no such talk.

“Cole’s got a lot of experience,” Ogle concedes. ‘He’s been in the UFC for a very long time. I’m a newcomer and I’m looking to take that experience. I basically want to up my levels and my game just by getting in there with him. There will be a lot to learn from the fight, and regardless of how it goes down, I’m going to come out knowing a helluva lot more about myself, and being ten times better. There’s no dispute on how good Cole Miller is. He hasn’t had the hype train; he’s built his experience from the ground up through hard work and determination.”

And that’s just the way Ogle wants to make his mark in the sport, and if he’s got to dig deep and battle it out for 15 minutes with the American, so be it.