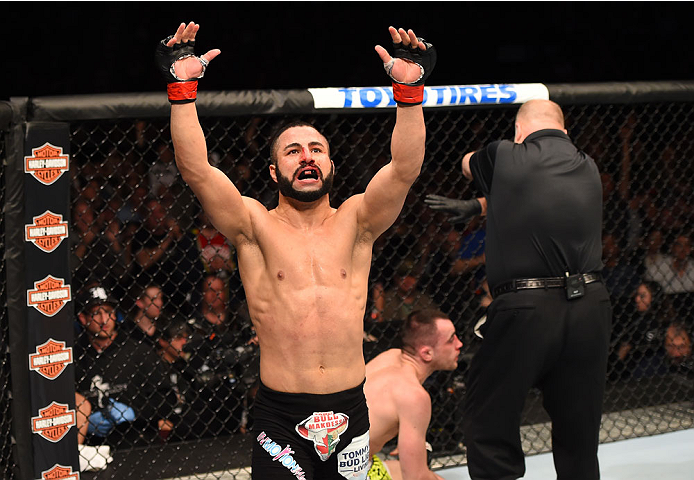 This Saturday night, UFC lightweight John “The Bull” Makdessi has the chance to join a very special and rare combat sports club: the “I have defeated Donald Cerrone” Hall of Fame.

“At this point in my career, when opportunity knocks - you have to take it,” Makdessi said. “If I want to be the best then I have to beat the best. I’ve been dreaming about this my whole life - fighting on the big stage. I don’t break under pressure. Donald Cerrone is a tough competitor. I respect him a lot. I truly believe his style and my style will be an exciting fight. He’s going to bring it. This is the type of fight people want to see - guys who are really going to engage. My style, I engage. His style, he engages. Styles make fights. If he chooses to stand with me, it’s going to be an exciting fight.”

Less than a month ago, Makdessi returned to Octagon action with an impressive first-round knockout of Muay Thai kickboxing star Shane “Shaolin” Campbell. During his yearlong self-imposed absence from fighting, he did some soul searching, restructuring in his professional and private life, and received long overdue corrective eye surgery for double vision he had since he was a kid. This refocused Makdessi entered the Octagon with something to prove against the hard-striking Campbell at UFC 186 and The Bull delivered.

“My philosophy when it comes to fighting, it’s all about how much are you able to take and how much are you able to give in return,” Makdessi said. “I took his best shots and I was able to counter everything. I knew he was a taller guy and I was able to cut the ring off and was able to get inside as soon as possible. I was very aware of his hard kicks, I was very aware of his fighting style’s mentality. At Tristar gym, I was making sure I was sparring with guys who have that Thai style. I work very hard, I train very hard. I truly believe in my intelligence in the fighting game. I’ve been training since I was six years old. I had a feeling he was going to engage with me. I’m very good at those types of fights. I timed him very well. My fighting speaks for itself.”

For the 30-year-old from Halifax, Nova Scotia, Canada, the final result was two knockdowns and a TKO all inside the first round and all by his powerful punches. The win improved Makdessi’s pro record to 13-3, including six inside the Octagon. More so, the win set him up for this showdown with Cerrone. Originally, the current #3 ranked UFC lightweight was supposed to scrap with the undefeated Khabib Nurmagomedov with a possible title shot on the line. Only four days after his KO of Campbell, Makdessi got the call asking if he was interested in replacing an injured Nurmagomedov against Cerrone at UFC 187 and, obviously, he said he wanted it.

“I went back to the gym and I went right back into high-intensity training,” Makdessi said. “I’m already physically and mentally in shape. I couldn’t ask for a better time for this to happen. I’m already peaking. I look at this as now or never. There are too many fighters at 155 pounds; it’s the most stacked division. I need to fight a top guy because it is the only way I can truly test my skills. The Shane Campbell fight was the perfect warm-up fight. A big advantage for me going into any fight is my unpredictability. People underestimate my striking, people underestimate my power, people underestimate my wrestling and ground game. It’s all about going out there and fighting my fight and giving the fans a finish, a finish they’ve never seen before.”

Up next, Makdessi takes aim at Cowboy this Saturday in Las Vegas. There are seven-fight win streaks and then there is what Cerrone has accomplished inside the Octagon since UFC 167 with seven straight victories including four stoppages over easily some of the best and brightest 155-pound fighters this sport has ever known. Whether it’s Team Jackson’s or the BAMF crew or both, Cowboy has looked all sorts of unstoppable these past couple years on his way toward what appears to be an inevitable UFC title bout.

Instead of Nurmagomedov’s wrestling standing in Cerrone’s way at UFC 187, it’s Makdessi’s striking. While the oddsmakers will no doubt have him as a sizable underdog, The Bull has an undefeated kickboxing background similar to Cerrone’s and Makdessi just dominated another talented Muay Thai stylist in his latest Octagon outing. Riding the high of a stellar performance into the excitement of tangling with a top five opponent, this could be the Canadian’s time to charge through the UFC lightweight rankings with one big win on Pay-Per-View.

“The scary thing about me is that I still have not reached my full potential in the Octagon,” Makdessi said. “You can look at my highlight reel. I’ve turned every striker into a wrestler. Once they feel my power, they try to take me down.”