Oezdemir's new nickname symbolic of his journey up UFC ranks

Volkan Oezdemir has wasted little time proving that he’s a serious threat in the UFC light heavyweight division and he has no intentions of slowing down as he heads into his UFC 214 main card bout on Saturday.

Debuting on short notice in February, Oezdemir dove into the deep end of the talent pool, picking up a split decision win over Top 10 fixture Ovince Saint Preux in Houston, Texas. Three months later, he knocked out Misha Cirkunov in 28 seconds, a performance that forced everyone to sit up and take notice of the impressive newcomer. By the time he sat down at the post-fight press conference, the 27-year-old already had his next fight lined up, agreeing to square off with British knockout artist Jimi Manuwa this weekend.

“That’s why I don’t try to choose the easiest fights; that’s why I choose the higher-ranked guys. The first fight was a tough fight, a Top 6 guy, and the other one was one of the up-and-coming (guys) – people were talking about him as a potential next champion – and now it’s Manuwa, who is also in the picture for the title shot.”

His rapid progression up the rankings and ability to finish fights quickly has also given birth to a new nickname.

“We found another name – ‘No Time’ – and it’s ‘No Time’ because I’m trying to rush to the belt and I’m finishing all my fights pretty fast,” Oezdemir explained. “Misha was not my fastest win, so I think that’s something maybe I can go for it now.”

The victory over Cirkunov in Sweden was the second-fastest finish of Oezdemir’s career and the 11th first-round stoppage win amongst 14 career victories, so his new handle certainly is apt.

With an impressive collection of finishes on his resume and a history of competing at heavyweight, you might wonder how the native of Fribourg who now trains in South Florida could remain under the radar even after edging out a proven veteran like Saint Preux on short notice in February. But it’s something the level-headed light heavyweight understands and pays no mind to, especially now that everyone is acutely aware of who he is and what he brings to the table.

“You have to think about the level of competition, so it’s understandable,” said Oezdemir, who had fought just once in the 29 months prior to his promotional debut. “But once you prove your point in the big league, people really start paying attention and that’s what’s happening now.

“There is always going to be something, though,” he added. “So I don’t pay attention to that. All the talk, all the whatever that can happen around me, it’s never going to go into my head.” 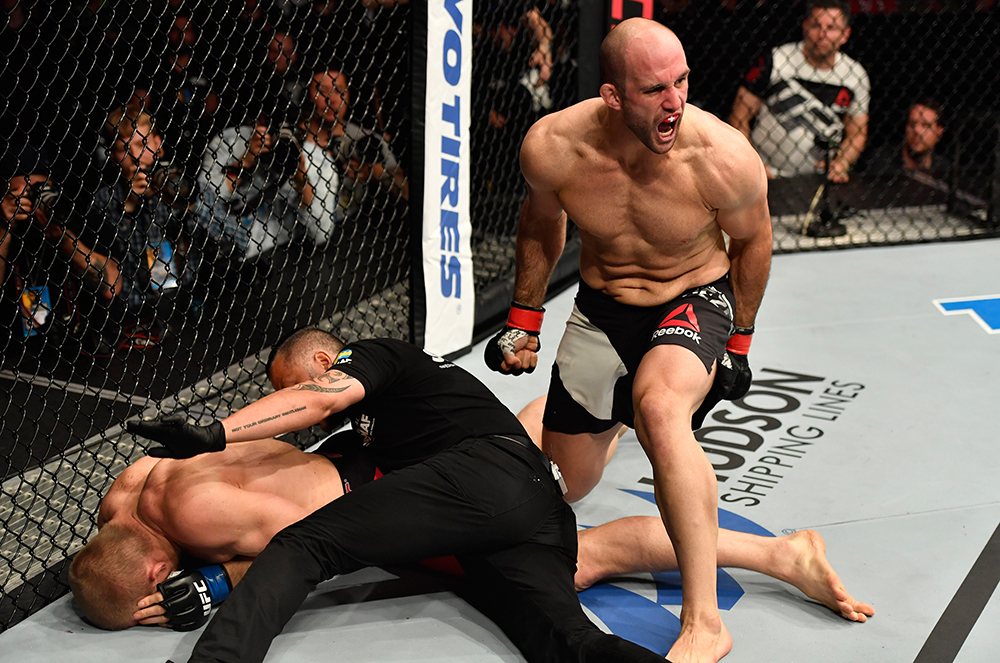 Instead, Oezdemir focuses on charting the quickest course to fighting for and winning championship gold in the UFC light heavyweight division, which is why he’s wasting little time returning to the cage this weekend against the powerful “Poster Boy” in Anaheim.

After posting a first-round knockout win over Corey Anderson in London – his second straight blistering finish on home soil – Manuwa lobbied for a championship opportunity of his own, taking aim at reigning champ Daniel Cormier. But with Jon Jones slated to return and his rivalry with “DC” needing to be settled, a title eliminator fight on the same card was the best available option for the London-based finisher.

Because he trains alongside Alexander Gustafsson at Allstars Training Center in Stockholm, a matchup with “The Mauler” was out of the question, so enter Oezdemir, who slept Cirkunov with a short right hand behind the ear one fight prior to Gustafsson’s lopsided win over Glover Teixeira in front of a packed house at the Ericsson Globe in May.

“I know what I’m capable of and I’m confident in my abilities, so I don’t need to think twice about it (taking the Manuwa fight). It’s all about opportunities for me and if I can build a good resume by taking every opportunity and climb the ranks really fast, it’s going to be amazing to me.”

And just as the fight came together quickly following his performance in Sweden, the fast-working contender expects it to end in a hurry as well.

“That’s the goal I’m heading towards and the fight is just going to be just a one-round explosion, that’s it.”