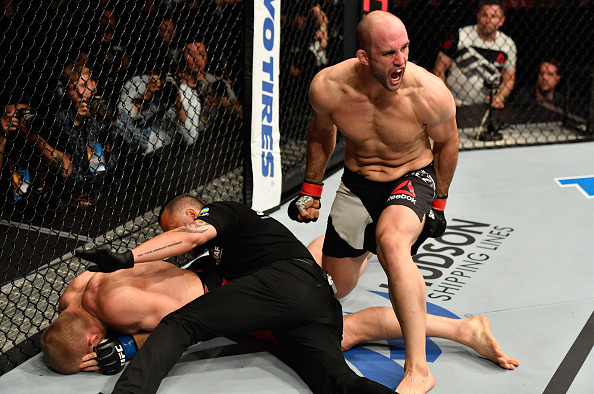 If anyone thought Volkan Oezdemir’s upset win over Ovince Saint Preux was a fluke, those comments got silenced Sunday at Ericsson Globe in Stockholm, as the No. 5-ranked light heavyweight contender from Switzerland knocked out the No. 7-ranked Misha Cirkunov in the first round of their UFC Fight Night co-main event.

“That was the second time people were not thinking about me, but I’m here now – count on me,” Oezdemir said. “I came from nowhere and made my way to the top by fighting top-ranked guys, and I’m going to do the same.”

Both fighters were throwing hard from the start, eager to make a statement with a win. And it was Cirkunov who appeared to take the upper hand as he backed Oezdemir to the fence, as the Latvia native rushed in, a short right to the head by Oezdemir put Cirkunov face first on the canvas. Referee Kevin Sataki immediately jumped in, with the end coming 28 seconds into the first round.

A battle of welterweight veterans saw Peter Sobotta score the biggest win of his UFC career, as he impressively stopped Ben Saunders in the second round.

Sobotta sent Saunders to a knee with a left hand as the bout began, and though “Killa B” shook off the blow quickly, the Balingen product’s striking continued to look sharp, and with a little over a minute left, another hard left sent the bloodied Saunders down, and this time it was a thudding knockdown that sealed the round in Sobotta’s favor.

In the second minute of round two, the left staggered Saunders once more, and Sobotta swarmed, eager to get the knockout. Saunders again got his bearings back, but midway through the frame, Sobotta followed a left with a right knee to the head, and referee Neil Hall had seen enough, halting the bout at 2:29 of the second stanza.

Taking knockout artist Abdul Razak Alhassan out of the first round for the first time, Omari Akhmedov used a varied attack to take a hard-fought split decision in their welterweight bout.

After a kick catch / right hand punch by Akhmedov put the fight on the ground early, the Russian had a brief opportunity to work his ground game before the two rose. A second takedown followed, but after a return to the feet, the round was largely tactical until some wild exchanges in the closing minute.

Alhassan began tagging his opponent more and more in round two, but the resourceful Akhmedov got a quick takedown to slow his foe’s momentum, and when they stood, it was “The Wolverine” who landed some hard shots and then scored another takedown. With two minutes left, a flush right hand by Alhassan marked Akhmedov’s face up, but another takedown kept the Texan from following up.

Akhmedov continued to mix things up in the third, with his iron chin allowing him to hang in on the feet before he took the fight to the canvas and kept Alhassan from getting any momentum. 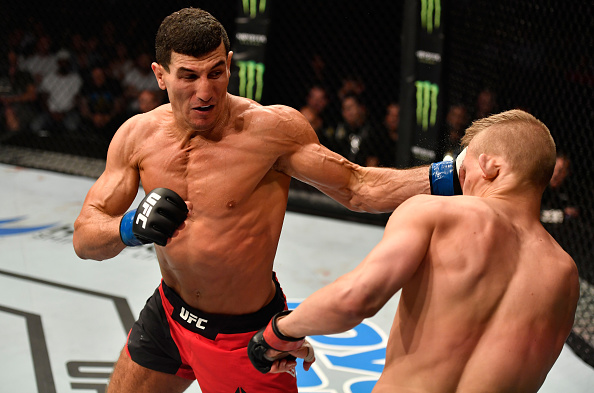 The Swedish newcomer, who replaced Emil Meek on short notice, fought like an old pro in the first round of his UFC career, performing well on the feet and the mat, with a successful takedown and some hard knees in the clinch being particular highlights.

Taleb briefly rocked Enkamp (7-1) with a left punch to the head early in round two, showing the Stockholm product that he wasn’t going anywhere, and in the closing stages of the round, the Montrealer did solid work on the ground as well.

The ground game was the true deciding factor in the fight, as Taleb got Enkamp to the mat once more in the final two minutes of the third round, and his control on the mat was reflected in the judges’ scores of 30-27 twice and 29-28 that improved Taleb’s record to 13-4.

Buoyed by the hometown crowd, Hermansson took control from the start, taking Nicholson to the canvas in the opening 20 seconds. Nicholson attempted a guillotine choke, but Hermansson was unbothered by it, and he soon had Nicholson flattened out and taking blows. After several unanswered shots, referee Bobby Rehman intervened, stopping the bout at the 2:00 mark of round one.