When Ode' Osbourne Fulfills His Dream Of Fighting At Madison Square Garden He'll Be Calm, Focused And Thankful.
By Thomas Gerbasi, on Twitter: @TGerbasi • Nov. 4, 2021

More often than not, Ode’ Osbourne can best be described as a happy young man.

“It's the most important part of my success,” admits the flyweight prospect.

But as he approaches his fourth UFC bout this Saturday against CJ Vergara, “The Jamaican Sensation” may have taken that attitude to a new level. And all it took was a trip to Las Vegas, one he didn’t even tell the world about until he was there and settled in with his new camp at Syndicate MMA.

Once mixing his life as a prizefighter with his gig as a teacher in Milwaukee, Osbourne has put teaching on hold to go all-in on scaling the 125-pound ladder in the UFC. And while he’s not in the classroom, his students aren’t far from his mind.

“I enjoy working with kids more than I enjoy fighting,” he said. “It's my biggest passion, but I have to sacrifice that in order to do what I need to do most. What am I going to show these kids? It's like the airplane mask; you have to put the oxygen mask on yourself first and then you put it on the person sitting next to you. So in order for me to show them success and what it looks like, I have to first show them sacrifice.”

That meant leaving everything behind to chase his dream and right his ship after losing his last bout against Manel Kape, a defeat that left him 1-2 in the UFC. And though he thought of different spots initially, once he spoke to coach John Wood on the recommendation of his former teammate Leah Letson, he knew Syndicate was the right fit.

“Leah told me about him, and hearing about the energy that Syndicate had, I had to find out for myself,” said Osbourne. “So I called John and we had a great conversation. The chemistry, right off the bat, was there. I knew where I wanted to go.”

So he went, and while it was a sacrifice leaving the place that was his home for the last ten years, he didn’t hesitate.

“I've always been the kind of person to persevere to whatever I need to do,” he said. “When I was done with wrestling in high school, I didn't just stay in Florida and hang out and party. I said to myself, what is the next best thing? Where can I go where I can get the best wrestling and I can get away from everything? Boom, Wisconsin. I went to Wisconsin, got into fighting. Ten years later, I'm saying the same thing. What's the next best thing so I can reach that next level? So making that transition is not difficult for me because it's what I need to do. I'm a survivor. I've always been the type of person to do what I need to do to survive and get to that next level.”

Needing to get to that next level was always the goal, but the 29-year-old assumed he would get there in Milwaukee. But after the Kape fight, it was time for a change of scenery, something that may not have happened if he won that August bout. 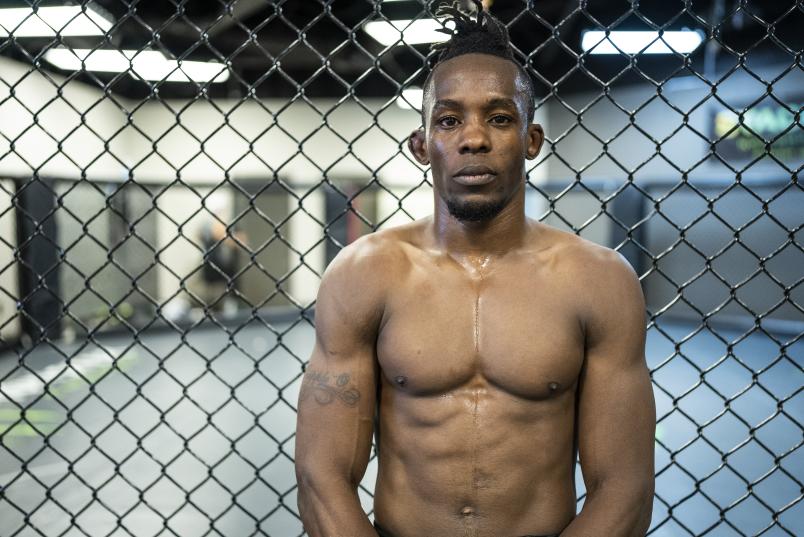 “It (the loss) needed to happen for me to make that decision,” he said. “Had I won again, I still would have been like, okay, I can do this by myself. And when you get to a certain level in life, especially in fighting, especially the championship level when you're fighting for a title, you need people around you, you need the right energy, the right space. Nothing against my last gym, it’s a great gym, it just wasn't the gym for me.”

So now this citizen of the world finds himself in Las Vegas. Next stop, New York City, a stone’s throw from where he spent some of his formative time in Brooklyn after moving to the States from Jamaica. Sure, he hasn’t seen the Big Apple since seventh grade, but fighting in Madison Square Garden does mean a lot to him.

“It definitely does, a hundred percent,” he said. “I haven't been back to New York since I was a kid, so that's a big jog down memory lane. There's a lot of memories from when I was there.”

That doesn’t mean he’s going to be busy reminiscing while Vergara is trying to take his head off his shoulders. The way Osbourne sees it, they’ll be plenty of time for that after the fight.

“You can’t let the hype of the fight get you carried away and get you distracted, but after the fight you can appreciate that stuff,” he said. “You can’t be focused on the building and the people and everything else when the only thing that matters is you getting your hand raised. There's levels to being a professional fighter. When you first come to the game, yeah, it's awesome and amazing. And don't get me wrong - I cherish and appreciate fighting at the Garden. That's a dream come true and I feel so blessed and I'm so grateful. But, at the same time, I have to stay grounded. When I win my fight, then I can appreciate it even more and be celebratory.”