Ode' Osbourne Out To Inspire The World

When he’s not in the gym and preparing for fights, bantamweight Ode’ Osbourne fills his days as an assistant teacher in Milwaukee. Just don’t call it a back-up plan if the fighting gig doesn’t work out.

“Back-up plans are good, but they’re for people who don’t think they’re gonna make it,” said the 27-year-old. “And that’s always been my mentality. I tell my kids this all the time – nobody believes in your dreams like you believe in your dreams and nobody can ever take that away from you. And the more people doubt you, the better you’re doing.”

Not many are doubting Osbourne’s upside at the moment, as he’s preparing for a UFC debut in early 2020 after pushing his pro MMA record to 8-2, 1 NC with a first-round submission win over Armando Villareal on Dana White’s Contender Series in July.

And while it was a week that saw four of the five bouts on the card end before the judges got involved, Osbourne was confident that he was leaving Las Vegas with a UFC contract. How confident? He knew a lot longer than anyone else did.

After moving from Kingston to the United States when he was nine, Osbourne could have done whatever he wanted to. Ultimately, he gravitated to wrestling, then fighting, and after winning seven of his first ten pro fights, the win over Villareal punched his ticket to the big time, a reality he felt before it became official.

“After the fight, I knew because I left it all out there,” said Osbourne. “There was nothing else I could have done.”

Osbourne joined Antonio Arroyo, Don’Tale Mayes and Brendan Allen as contract winners that night, and all but “The Jamaican Sensation” have made the walk to the Octagon. That’s soon to be rectified, and in the meantime, it’s a lot of mental and physical preparation for the next chapter of his career, and Osbourne has both under control.

“I stay super calm and I try to be super zen and just not think about any of the negative stuff,” he said. “I try to go in there and know that I’m the best. You can’t have any doubts. It’s not a cocky or ego thing, but you have to know you’re the best. You have to.”

That’s not to say he hasn’t had moments of doubt in the past.

“Of course,” Osbourne continues. “I think every single fighter has had those moments of, ‘What if I get knocked out or lose in front of all the people that I love?’ I think the worst part of fighting is waiting in the locker room before you have to fight. That’s the worst part because you have your thoughts to yourself and you’re just in your head the whole time. I used to not be able to silence them when I first started, so I started goofing off and having fun and that helped me a lot. Because I realized that the more serious I was, the louder the voices of doubt became. And the more fun I had, it went away. So now, I’m joking and having fun before the fight.” 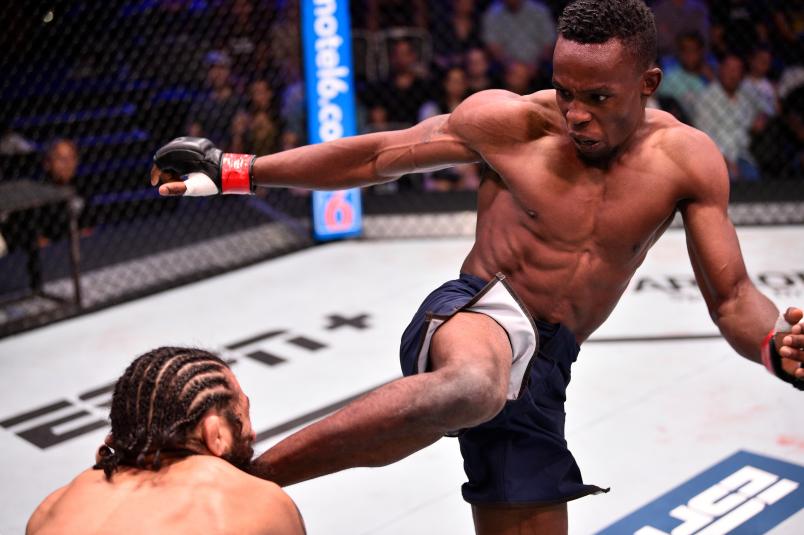 That must make him very popular behind the curtain.

“They think I’m crazy,” he said of the fellow fighters watching his pre-fight demeanor. “But it’s my personality, and when it’s time to go out, I get this stoic look on my face and zone out.”

Then it’s fight time, and it’s been over two years since he’s tasted defeat. That’s an impressive run he hopes to make more impressive in the fights to come, but beyond wins and belts and internet fame is a more important goal for the dedicated schoolteacher.

“I really want to motivate them to do something different, to have something else to do than play video games all day or goof off or get into trouble,” said Osbourne, who said many of his students are from the inner city, dealing with daily battles not many see. He knows all about those battles, having been there himself.

“For them to see someone who came from running barefoot in the slums to being in the UFC, that’s really inspiring,” he said. “And that’s what I want to do – I want to inspire as many people as I can, especially the youth.”

He’s got his chance. And it’s coming soon.