Ode' Osbourne Knows A Loss Helps In The Long Run

Pandemic or not, Ode’ Osbourne never stops. Even in the kitchen.

“I have a whole ton of potatoes,” laughs the bantamweight prospect, who took some time out from trying out a hash browns recipe to check in, and if we’re looking for metaphors in these crazy times, what better one than Osbourne bouncing back from a loss in his UFC debut by making hash browns out of potatoes.

Yeah, it’s not as catchy as making lemonade out of lemons, but it will do for now.

“There were small mistakes,” Osbourne said of his January loss to Brian Kelleher. “I attacked first when I should have defended first. Just marginal errors and he came out and was the better fighter that night.”

Disappointing, yes. But not a career-breaker for “The Jamaican Sensation,” who knows precisely how to dust himself off and return from setbacks.

“Most definitely,” he said. “I'm so happy that I've gone through this before. I know how it felt the first time I lost. If this was the first time I had lost, I would have thought, 'Oh my God, these guys in the UFC are too much for me and I can't handle this.' That would have been my mentality if this was my first loss.” 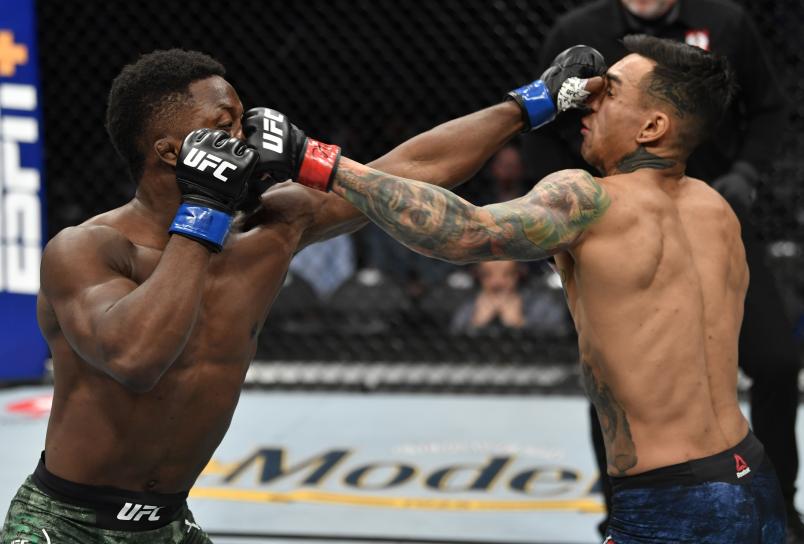 Twice before, in 2016 and 2017, the 28-year-old had to figure out what went wrong on fight night and how to get back on track, and after his submission defeat to Jose Calvo in 2017, he ran off four wins culminating in a first-round finish of Armando Villareal on last summer’s Dana White’s Contender Series that earned him a UFC contract.

“I've learned so much from the three losses that I've had,” Osbourne said. “It makes me a better fighter. When you win all the time, I'm not trying to brag or anything or say I win all the time, you lose that drive. If you go on a winning streak for three years and everything is just going your way, you get lax, and I think I definitely got a little lax. And when you lose, it gives you that drive. Somebody can beat me? All right. It gives you something to chase.”

Osbourne is more than ready to resume that chase, and once the call comes in from his team, he’ll have his gloves and mouthpiece packed up for wherever he’s needed.

“I fully trust the fight decisions they make for me,” said Osbourne of his coaches at Pura Vida MMA in Milwaukee. “They'll call me when they have a fight for me and they've talked to my manager and they say this is what we've analyzed. They know how I am, I'll take a fight right away, but they haven't said anything yet.”

In the meantime, Osbourne is trying to keep things as normal as possible for the students he teaches, even though nothing is normal these days.

“Those kids are strong and they're dealing with this just fine,” he said. “We check in with them at least twice a week and they're so savvy with technology, it's insane. Anything they need, they can find it out really fast. Me and my co-teacher had a 22-student classroom meeting with the kids in Zoom and it worked out really well. The problem is getting everybody to commit to it because it's such a drastic change of schedule. One day we only had six kids. So, it's trial and error but it's great because we enjoy doing it for the kids.”

And though Osbourne is one of those perpetually happy folks that we particularly need to hear from now, he admits that while he’s making the time work for him, he still misses the pre-pandemic life.

One of those things is his gig as a professional mixed martial artist, one he hopes to get back to ASAP.