It’s been an amazing journey for Karolina Kowalkiewicz from Lodz, Poland to Rio de Janeiro, Brazil, site of her UFC 212 co-main event bout against Claudia Gadelha, and the 31-year-old strawweight contender approves of that word choice.

“This is my favorite word, amazing,” she laughs, beginning to conquer the English language in the same way she’s doing so in mixed martial arts, moving from obscurity as a Krav Maga instructor to a championship fight in Madison Square Garden. It’s the stuff they make movies about, especially considering Kowalkiewicz’ start in the sport, which she describes as “love at first training.”

And even though she fell short of winning the UFC strawweight belt when she faced compatriot Joanna Jedrzejczyk at UFC 205 last November, her story could end today and it would still have a happy ending, considering how MMA has 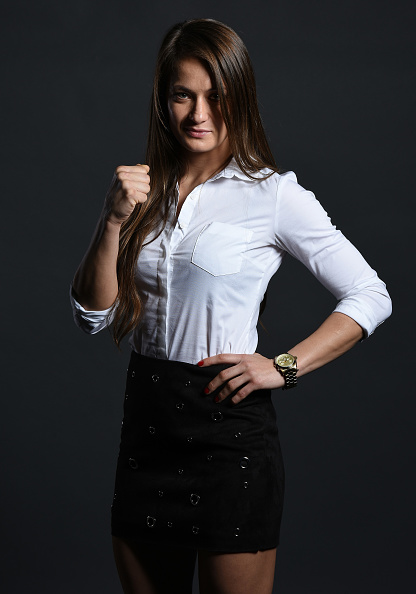 “I always loved the sport, I have a very strong mentality, and when I came to the Octagon, I know this is funny and stupid, but for me, the Octagon is the safest place in the whole world for me,” she said. “I love the feeling when I’m in the Octagon.”

Then there are the tangible rewards, like finding a place to stay befitting one of the top athletes in the world.

“After my last fight I bought a new apartment,” she said. “For me, this is something amazing. Before UFC, I lived in a very, very, very small flat. I only had one room and a kitchen. Now I have a really nice apartment.”

There are more chapters to write, though, even if Kowalkiewicz only sees herself fighting for another, “Two, maybe three years. After that, I want to have a family and children. This is very important for me.”

In the meantime, there’s more to learn, more contenders to fight, and more dreams to make reality. It starts with the No. 1-ranked Gadelha, who has also fallen short of victory against the champion, both in title and non-title situations. The Brazilian shook off her July 2016 loss to Jedrzejczyk with a win over Cortney Casey. Yet for Kowalkiewicz, this is her first bout since her first pro defeat last year, one that still stings.

“It was my big dream to fight in New York,” she said. “When I think about this fight (with Jedrzejczyk), I am very angry because I was very, very close to winning, but I know one day I’ll beat her and I’m hoping it’s this year.”

It’s possible, assuming she gets by Gadelha. The first fight with Jedrzejczyk was competitive throughout, and Kowalkiewicz put the champion on the deck in the fourth round, so no one would scoff at a rematch. But there is pressing business in Rio with a fighter the Poland native has a lot of respect for.

“Claudia is a really great fighter,” Kowalkiewicz said. “She has a good ground game, good wrestling, good standup, and she’s very dangerous in everything.”

Sounds like a rough night ahead, but that’s fine with Kowalkiewicz, who doesn’t go in for any pre-fight trash talk or gamesmanship.

Kowalkiewicz smiles a knowing smile, as if she has everything all planned out for the rest of the year.

“Now I am number two,” she said, referring to her place in the strawweight rankings. “After my fight with Claudia, I hope I will be number one, and after my next fight, I’ll be the champion. I only have one ultimate goal – the UFC belt. I want to be a champion.”