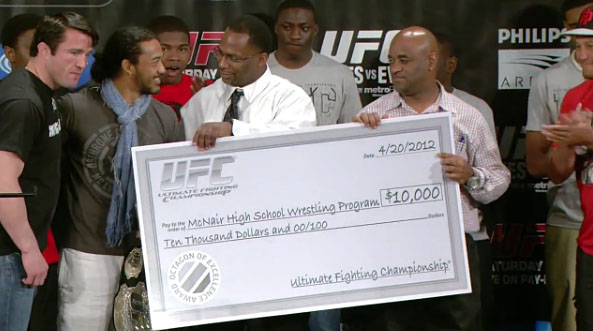 Las Vegas, NV -- The Ultimate Fighting Championship® will recognize Atlanta’s 2012 McNair High School wrestling program for their accomplishments with an “Octagon of Excellence™” award, which includes a $10,000 grant. The grant will assist the Dekalb County Wrestling Champions with the purchase of uniforms, mats and travel to tournaments for the upcoming season.The “Octagon of Excellence™” award was created by the UFC® to recognize individuals or groups that have excelled in their chosen sport, profession or school. In addition to being named Dekalb County Wrestling Champions for the first time in their school history, the Mustangs also had a number of wrestlers qualify for the state championships. Dr. James Jones, the school’s principal, will also be recognized for increasing the graduation rate at McNair high school from thirty percent in 2003 to over seventy percent in 2009.

The award and check presentation will take place prior to the weigh-ins for UFC® 145: Jones vs. Evans at Fox Theatre on Friday, April 20 at 3 p.m. Official weigh-ins begin at 4 p.m. and will be streamed live at http://www.UFC.com. The entire wrestling team and Principal Jones will be in attendance. The event is free and open to the public.