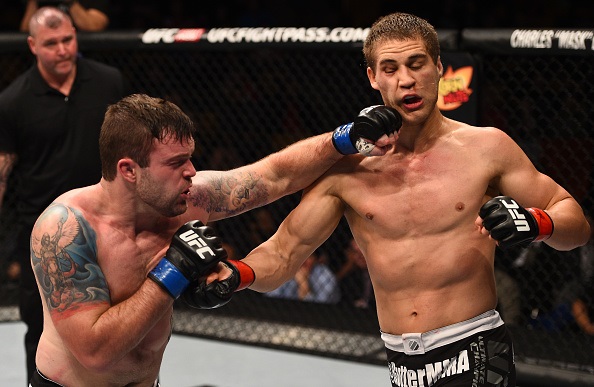 Both fighters got after it as soon as referee Gary Forman waved them into battle, Van Buren firing off kicks and O’Connell trying to land overhand rights to the jaw. O’Connell tried to reduce his 6-foot-5 foe’s height advantage by pinning him against the fence, but Van Buren’s inside game was solid, particularly when he fired off knees.

The knee-based clinch attack by Van Buren didn’t slow down in the second, yet just when it looked like Van Buren was going to pull away, a looping right hand by O’Connell rattled the Californian with a little over three minutes left, and the tide began to turn.

The right rattled Van Buren again in third and with a little over three minutes left, a left put him on the ground. Van Buren rose to his feet but O’Connell was relentless in his follow-up, with Forman halting the bout at the 2:11 mark. 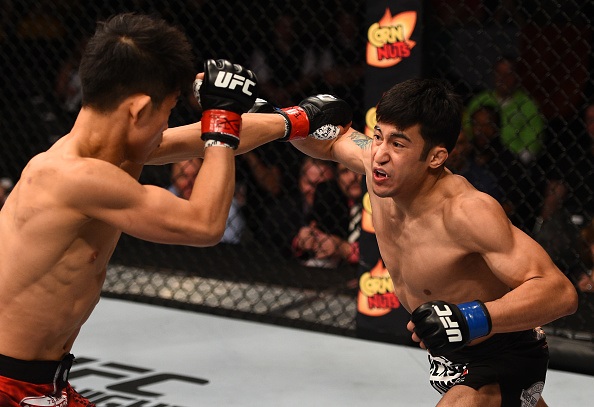 SANCHEZ vs. MATSUDA
Flyweights Joby Sanchez and Tateki Matsuda got the night off to an exciting start, with Sanchez edging out the three-round split decision victory.

Matsuda rocked Sanchez with the first right hand he threw, but the Albuquerque product recovered well. Another hard right followed moments later, but it was Sanchez who struck back with a right of his own midway through the round, putting Matsuda on the deck. Somerville’s Matsuda shook the cobwebs loose and rose to his feet, putting the cap on an entertaining frame.

The aggressive Matsuda got taken down in the opening minute of round two, but he got to his feet quickly, Sanchez using effective movement and striking while “Tech” landed his share of quality power shots, leading to some exciting exchanges before the horn sounded.

After a strong start to the final round, Matsuda got wobbled and put on the deck by Sanchez, who went to work for the finish. With two minutes left, Matsuda rose, but Sanchez’ crisp 1-2s kept the points piling up for the out of towner, who picked up the well-deserved win.