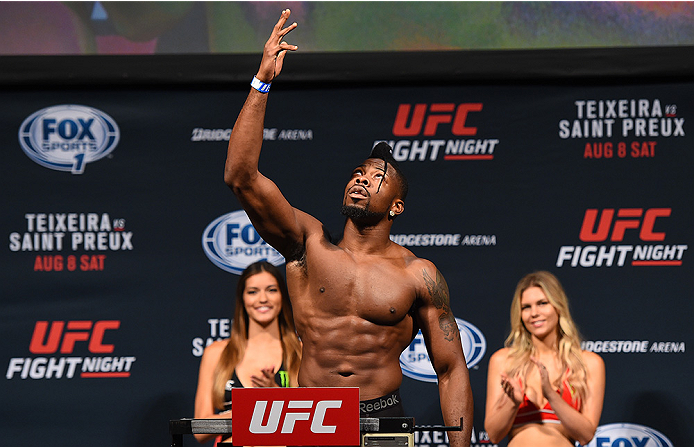 If there was one major takeaway from Oluwale Bamgbose’s UFC debut against Uriah Hall last August, it was one you’ve probably never heard before.

“It’s pretty dark in there,” he laughs. “The way people watch it, it’s like ‘oh wow, it’s bright and we can see everything.’ But now I know what to expect and I’ll bring my own light.”

Call it a modified version of the first-time UFC jitters, that mysterious phenomenon that can hit newcomers in a bunch of different ways. Bamgbose, 5-0 on the regional scene before his first-round TKO loss to Hall, can now look back on the fight objectively as he prepares for his second visit to the Octagon this Sunday against Brazil’s Daniel Sarafian.

“You don’t know how things really are until you go through it,” the Bronx native said of the Hall bout. “I played it out so many times in my head, not knowing what it was going to feel like, what it was going to look like, and when it first hit me, I was like ‘damn, not bad. Focus, focus, focus.’ But then I felt like I wasn’t as aggressive as I usually am.”

It was a mix of being in the big show and being a 5-foot-11 middleweight. That never bothered “The Holy War Angel,” but for some reason, in Nashville it did.

“To be honest, every single opponent I fought was bigger to me and they all felt like stone,” he said. “Then I’m like ‘This is guy is bigger than me, he feels like rocks.’ But they all feel like rocks, they’re all bigger than you. Punch through the rock. That’s the adjustment I’ve made now with my whole mindset. All these guys are solid athletes and they’re huge, but it’s not like it’s something I haven’t faced before.”

At the very least, against Sarafian he’ll have a favorable size matchup, as he’ll be facing a 5-foot-9 opponent, but it doesn’t matter to Bamgbose, who now doesn’t care if his opponent is two inches shorter or a foot taller. He’s fired up, eager to show what east coast fans have already seen from him in his pre-UFC days.

“It’s a matter of going out there, remembering where I came from, what I’ve accomplished, who I am, what I can do, what I’m capable of, and breaking and smashing through that mountain,” he said. “I’m not shying away from the power or speed that I possess. Everything that I have to offer to MMA, I’m going to show it. I have unfinished business and I’m in the UFC for a reason. Yeah, some of the guys have more fights than me, but that doesn’t mean that they’re better than me, and it’s my job to show that.”

One thing is for certain though, and that’s while Sarafian has flirted with the welterweight division before, Bamgbose has no intention of dropping to 170 pounds.

“I don’t see that as a good idea,” he said. “Choosing a weight class is like choosing a major in college. You can’t play around with it. Through your amateur career, you explore a little bit, but when you go pro, you make sure that this is something you’re a specialist at.”

So 185 pounds it is, and at 28 years old, Bamgbose feels that the time is now to make an impact in the UFC. And not just a minor one either.

“I have to go in and seize the opportunity,” he said. “I’m not going to be young forever. I’m not going to be as talented forever. One day I’m gonna be like (Michael) Jordan and Kobe (Bryant), where I’m gonna lose it and I’m gonna get old, and I don’t want to be one of those woulda, coulda, shoulda guys. I want to say that when I had it, I used it and I was able to accomplish great things. I’m ready.”