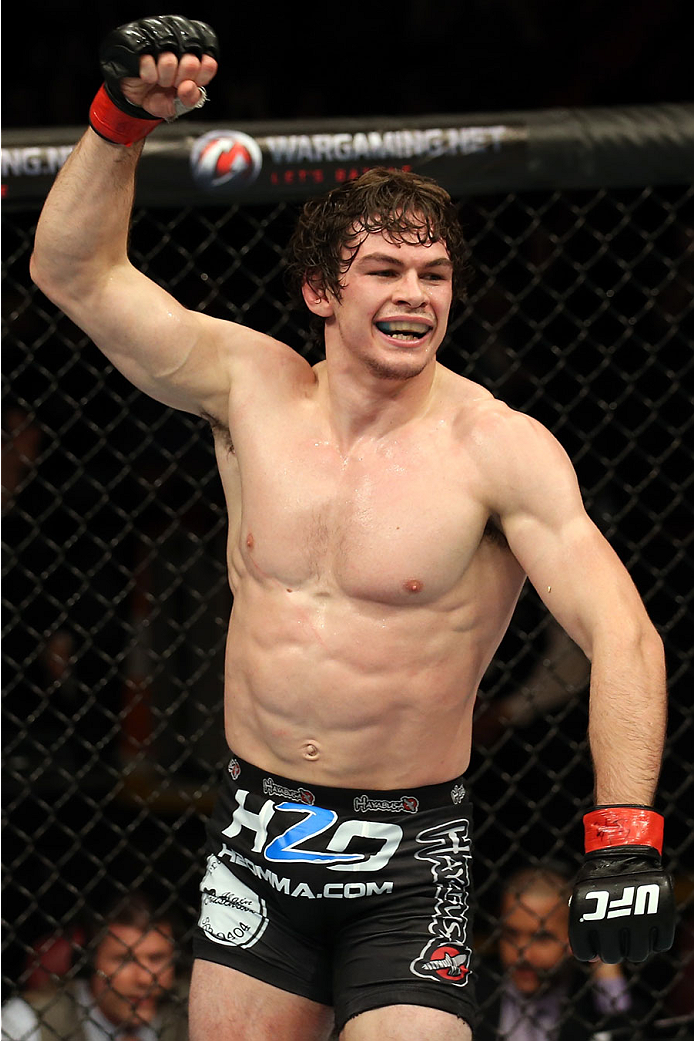 For someone as quick with a joke as Olivier Aubin-Mercier is, it’s hard to picture him being anything but fun loving 24 hours a day, seven days a week. But despite making it to the UFC and compiling a 1-1 record thus far, those fights were anything but fun for him.

“The hardest part for me was the pressure when I was getting into the Octagon,” he said. “It’s a shame that my last two fights I really didn’t enjoy being in the Octagon since I was so scared to lose.”

Most fighters deal with those feelings; few are brave enough to admit it. In Aubin-Mercier’s case, the first time UFC jitters cost him a TUF Nations title when he lost to current teammate Chad Laprise last April. The second time around in October, he picked up a win and a Performance of the Night bonus when he submitted Jake Lindsey. This Saturday, he promises a different fighter in style and attitude.

“My style changed a little bit, so that’s going to be fun for everybody to see the difference and fun for me to show what I learned too,” he said. “Right now, I switched my mentality a bit too. It’s going to be weird to say, but I just want to show off a little bit in the Octagon my next fight. That’s how you have fun fighting.”

There’s the “f” word again, and for this 26-year-old, fun and fighting have to go hand in hand to make everything work. It may seem to be an odd pairing when getting punched in the face is involved, but every fighter is unique, and Aubin-Mercier is no exception to that rule. So while a post-fight bonus and an impressive win might have been the signal to jump right back into the Octagon, Aubin-Mercier took a bit of a break – not from training, but from fighting.

“For me, six months was a little bit too much, but at the same time I was able to train new things in my game,” he said. “For sure it’s long, but I’m pretty happy with what I did in the six months.”

So after the six month break, will he be requesting a June return after his Saturday bout with David Michaud?

“Three or four months is good,” he said. “I like the vacation, I like training just for fun.”

That could take some getting used to, given the gang of killers that occupy Montreal’s Tristar Gym, but Aubin-Mercier loves testing himself in the gym and the Octagon.

“Oh man. It’s pretty nice, actually,” he said of work at Tristar, which is filled with fighters getting ready for UFC bouts. “About a month ago it was crazy, but for me it’s the best I can get in Montreal, and I’m pretty happy. I’m training at Tristar and at H20 too. It’s a good mix for me. My next fight, I’m going to be different than my last fight, so it’s going to be good for me to show everybody what I’m up to now.”

It doesn’t hurt that the UFC 186 bout comes in his hometown at the Bell Centre, and in a full circle moment, he will be fighting for the first time as UFC fighter in the same venue where he made his pro debut against Guy Poulin back in 2011.

“My first pro fight was at the Bell Centre, but there were maybe a thousand or two thousand people there at the show,” he laughs. “I think it’s going to be a little bit different this time, and for sure, it’s something big. Since I was a kid I was going there to see boxing shows or hockey, and it’s going to be hard for me to stay calm, but it’s a good experience too. It’s good for my future and my career to fight there as soon as possible to get better with the pressure.”

He speaks the truth, because with his upside in the fight game, bigger and bigger bouts in arenas like Bell Centre are certainly in his future. That also means more and more demands for his ticket allotment. One person who has been eliminated from the competition for his last remaining ticket though is his mother.

“Mom is not going,” he chuckles. “She never went to my fights, and she never watched me fighting live but one time, and it was when I lost to Chad. (Laughs) So she said never again. She’ll just wait for my dad to call her.”

Aubin-Mercier laughs, clearly the funniest fighter to emerge from Canada, maybe ever. You hope that positive energy never wanes, and if it hasn’t through a stint on reality television and the ups and downs that come along with the fight game, you get the impression that it never will.

“Nothing’s changed actually,” he said. “People recognize me a little bit more. That’s it. I joke with my parents because I’m staying a lot at their house and sleeping there, and I’m telling them that I’m going to stay there until I’m 50, so they’re a little bit scared about it. But I have my little apartment, that’s maybe the only difference right now. I won $50,000 on my last fight, but I didn’t really use it yet. Maybe I’m a little bit too conservative with money. So nothing changed really, I’m still the same guy.”